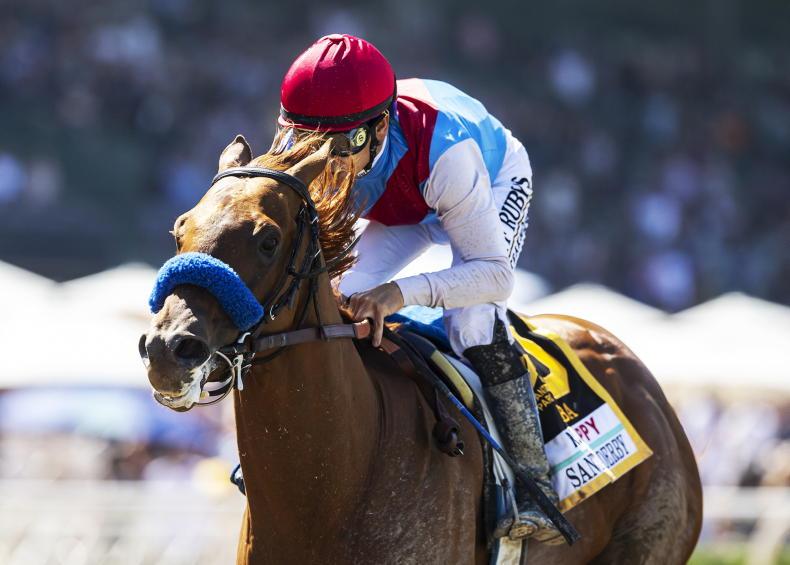 EPICENTER holds sway at the top of the US three-year-old ranking at the end of the summer but all the ‘also eligibles’ meet up in the $1 million Grade 1 Pennsylvania Derby at Parx Racing tonight. (Sky 11.10pm)

A repeat of July’s Grade 1 Haskell Stakes should make it a thriller as Cyberknife and Taiba then fought a final-furlong duel with Cyberknife prevailing by a head.

They top a line-up of 11 in the nine-furlong test and four Grade 1 winners indicate the talent of the field.

Taiba and Mike Smith shades favouritism over Cyberknife, both from the first crop of the record-breaking stallion Gun Runner.

They first met in the Kentucky Derby though both disappointed with Taiba finishing 12th and Cyberknife in 18th after going too fast early.

The Haskell was a different story as Cyberknife found the form that carried him to victory in the Grade 1 Arkansas Derby, while Taiba also rebounded with a big effort, back with original trainer Bob Baffert after his 90-day suspension ended.

Since their clash at Monmouth Park, Cyberknife was a well-beaten second to Epicenter in the Grade 1 Travers Stakes while Taiba, winner of the Grade 1 Santa Anita Derby earlier in the year, comes in a fresh horse. This is Cyberknife’s 10th run since last November.

Kentucky Derby third Zandon was also put in his place by Epicenter in Saratoga and though he is consistent, it’s hard to see him coming out on top here.

Taiba is lightly raced, with only that Haskell run since the Kentucky Derby and could well have more to offer with such a narrow margin between himself and Cyberknife.

He returned with a victory over White Abarrio and Classic Causeway in the Grade 3 Ohio Derby and finished third in the Jim Dandy where he didn’t get the clearest run and was just beaten two lengths by Epicenter.

We The People gained a lot of attention when he dominated the nine-furlong Grade 3 Peter Pan. He then ran fourth in the Belmont and second as favourite in the Grade 3 West Virginia Derby behind Skippylongstocking.

Saffie Joseph Jr will sends Skippylongstocking and White Abarrio who both have form in top company.

The running style will have a huge say in the finish of such a competitive looking race. Taiba looks the one who may still have improvement and may have too much for Cyberknife and Tawny Port.

The other feature race on the card is the Grade 1 Cotillion Stakes for fillies where D Wayne Lukas’ Secret Oath takes on her own gender again after tackling the colts in the Preakness.

She was not disgraced on that occasion but could only finish fourth to Early Voting, though only five lengths of Epicenter in second.

She does not seem to have anything of the calibre of Nest in this, the Pletcher filly having beaten her by a combined total of over 16 lengths on her last two runs.

Today’s rivals Goddess Of Fire and Gerrymander were well behind her, in third and fifth behind Nest in that Alabama Stakes at Saratoga in August.

Todd Pletcher takes her on with the Team Valor-owned Green Up, unbeaten in four races this season at a lower level and Grade 3 Monmouth Oaks winner Shahama, as well as Goddess Of Fire.

Grade 2 winner Gerrymander won the Mother Goose at Belmont Park in June 25th with Shahama second. She was fifth in the Alabama, and trainer Chad Brown said he is hoping for a better run.

Adare Manor is back with Bob Baffert who trained her to win a Grade 2 at Santa Anita earlier in the year. She was second last time in the Grade 1 Black Eyed Susan at Pimlico in May.

Steve Asmussen’s Gun Runner filly Society has won three of her four races this season and also has a shout. Her only defeat came in the CCA Oaks, where she stumbled at the break and got bumped.

In other graded race action, last year’s champion two-year-old filly, Echo Zulu, scratched on track before the start of the June 11th Acorn Stakes, returns under the lights at Churchill Downs in the $275,000 Grade 2 Dogwood Stakes.