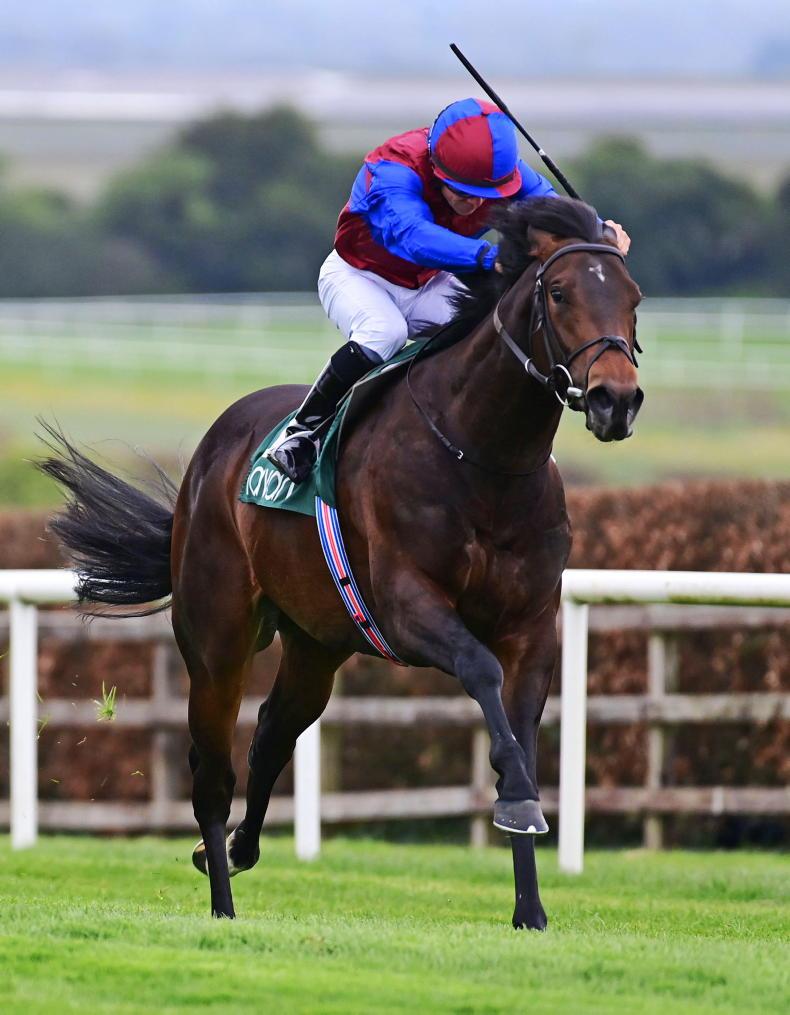 IT was Ballydoyle domination at Navan last Saturday as Aidan O’Brien completed a clean sweep of the listed events inclusive of a dominant display by New York City (112) who looks destined to contest the Commonwealth Cup at Royal Ascot.

In winning the Listed Committed Stakes, the three-year-old clocked by far the most impressive time-figure of the day and a closing three-furlong sectional that promises still more to come.

Although sent off the outsider of the three Ballydoyle colts, the son of Invincible Spirit had race fitness on his side, which Wayne Lordan made best of use from the instant the stalls opened.

Quick to stride, the partnership were always front rank and quickened smartly passing the three-furlong marker to post a closing sectional of 36.16secs which was almost a full second quicker than any other race on the day.

Straight Answer (110) was the only serious challenger as he was the last of the pursuing pack to come under pressure, although the visual impression was that New York City was going away again as the line loomed.

However, along with the choice of Ryan Moore, Cadamosto (106), who was also making his seasonal debut, there is a chance both may improve past the winner as the season progresses.

If this proves to be the case, they will take high rank amongst the three-year-old sprinters.

The second fastest race on the straight course was the first division of the apprentice handicap won by Sunset Nova (80) who now has form figures of 1441 over either the minimum trip or the extended five furlongs at Navan.

The son of Zebedee was also responsible for the second fastest closing sectional of 37.10secs so is worth noting when returning to the Co Meath track. Aesop’s Fable (80+) was the slowest of the races over the five-and-a-half-furlong trip, although his finishing effort of 37.12secs has him finishing to the same effect as Sunset Nova.

Tanaiyla (76+) was awkward leaving the stalls before finishing her race off nicely and the daughter Siyouni is sure to improve for the experience.

Concert Hall (107) won a race of bobbing heads to get her three-year-old campaign underway in a listed race where the overall time left room for improvement, a view which the closing sectionals highlight as being entirely plausible.

Ryan Moore never seemed rushed aboard the Dubawi filly as he looked confident in delaying his challenge until passing the two-furlong pole.

However, Magical Lagoon (107) responded admirably when challenged and the pair fought out a protracted duel to the line to produce a closing three-furlong sectional of 36.74secs which was the fastest of the round track races as they pulled an impressive three and three-quarter lengths clear.

Kyprios (110) put a disappointing three-year-old campaign behind him with victory over his full-sister Search For A Song (108) and looks to have potential as a stayer.

As with Concert Hall, the overall time was on the slow side but in finishing off strongly the Galileo colt posted a closing sectional 37.61secs and left the impression he had more to offer, he will likely target the Saval Beg Stakes at Leopardstown in May. Camorra (103) shaped with promise and would have finished third with a smoother passage.

The time of the concluding maiden looks slow in comparison to the previous handicap, but the time difference between the races can be attributed to the formative stages of the races being run differently.

The closing sectionals show the three Aidan O’Brien-trained colts in much better light as the debutant winner Arbutus (88+) stopped the clock for the final three furlongs at 37.47secs, marginally ahead of Kyprios.

To contextualise the sectionals, Magnetic North (78) stopped the clock at 40.50secs as he ground out victory in the handicap.