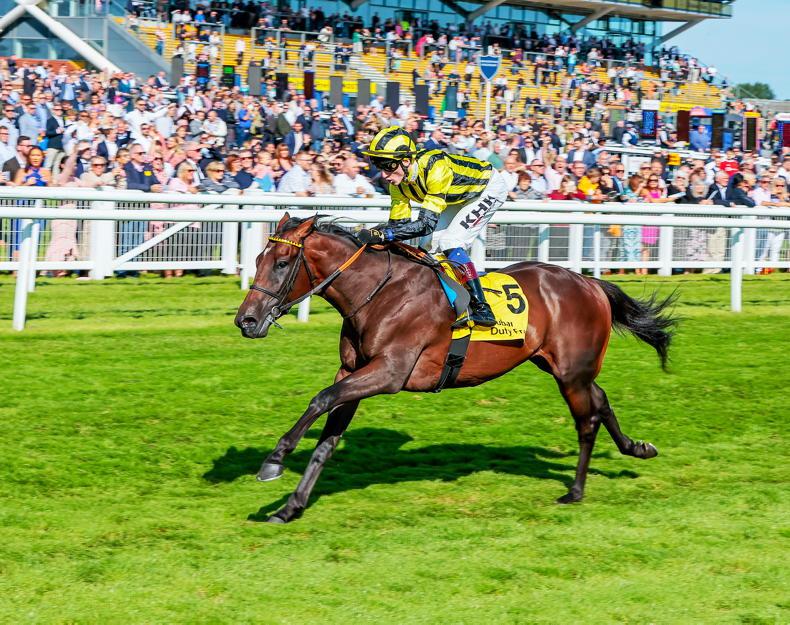 Sakheer and David Egan are clear of the field in the Group 2 Dubai Duty Free Mill Reef Stakes at Newbury \ Mark Cranham-focusonracing.com

DAVID Egan is riding on the crest of a wave and followed his first classic win at Doncaster with a memorable day at Newbury last Saturday.

The jockey’s four-timer included an exhilarating performance by next year’s classic hopeful Sakheer, while Stay Alert clocked the fastest time of the day at the Berkshire venue.

Sakheer (100+) ran a much quicker time figure at Haydock when announcing himself as a top-class two-year-old and was not required to run to the same level to triumph in the feature race, the Group 2 Mill Reef Stakes.

Saturday was all about the son of Zoffany demonstrating his finishing speed as he streaked clear of his field, clocking a closing sectional of 33.81secs which included a final furlong of 11.21secs.

To put some context to those numbers, talented sprinter Mitbaahy (105+) covered the same ground in 34.20secs and 11.82secs respectively.

The Dewhurst Stakes, for which he needs to be supplemented, is likely to be the end of season target for Sakheer as Roger Varian was reluctant to commit to next week’s Middle Park Stakes due to the quick turnaround.

Stay Alert (113+) won the Group 3 Legacy Cup Stakes in contrasting fashion on the clock as she finished best at the end of a race run at a ferocious gallop.

Fancy Man (113), Kemari and Max Vega contested the early lead, which David Egan wanted no part of as he chose to take a watching brief from second last.

However, at the entrance of the straight the Irish rider attached Hughie Morrison’s filly to the main group of runners. The passage to the line was not as smooth as would have been desired by supporters of the 5/1 chance and it was not until the furlong marker that Egan extricated the partnership from the rail.

However, once in the clear the daughter of Fastnet Rock was too strong for Fancy Man and the equally tired Dubai Future (113). The winner’s closing sectional of 38.48secs and final furlong of 13.31secs portrays the extent to which the finish was a slow motion one.

Hughie Morrison reported his filly to be stepping up to Group 1 company for her next assignment with the Champions Fillies & Mares at Ascot on Champions Day the target.

Marching Army (108) also impressed on the clock in the 0-105 handicap with the race unfolding in similar circumstances to the Group 3 over a furlong further. The winning of the race for the Godolphin runner was the decision of Louis Steward not to commit early in the straight when fellow front-runner Palavecino was sent for home.

The son of Iffraaj answered every call from his young jockey from that point as his closing sectional of 37.00secs proved strong enough to overhaul Ottoman Fleet, who looked to have the race won when moving to the front.

Marching Army has now won his last two races when wearing a visor, so assuming the headgear continues to work he could be competitive in a listed contest.

Groundbreaker (106+) caught the eye with his finishing effort and is one to consider moving forward as his effort at Windsor on his penultimate start was also achieved in a strongly run affair.

Roger Varian started his sublime day with Exoplanet (92+) making a successful winning debut in the style of a horse destined to progress into pattern company.

The son of Sea The Stars clocked by far the fastest time of the two divisions of the novice stakes, confirming his superiority over the second division winner Afterlife (80+) with a closing sectional of 35.13secs.

In comparison the Cheveley Park-Stud owned winner of the second division stopped the clock at 35.47secs.

Royal Champion, Ayr, Saturday, September 17th – took advantage of dropping in grade after contesting two very fast time races when beaten by Regal Reality and Anmaat. I have no doubt the son Shamardal can win at Group 3 level.

Prince Of Pillo, Ayr, Friday, September 16th – a dominant winner of listed contest who can compete at a higher grade.