Title: AROUND THE COUNTRY: Feldman's win 'Paved with Stars' 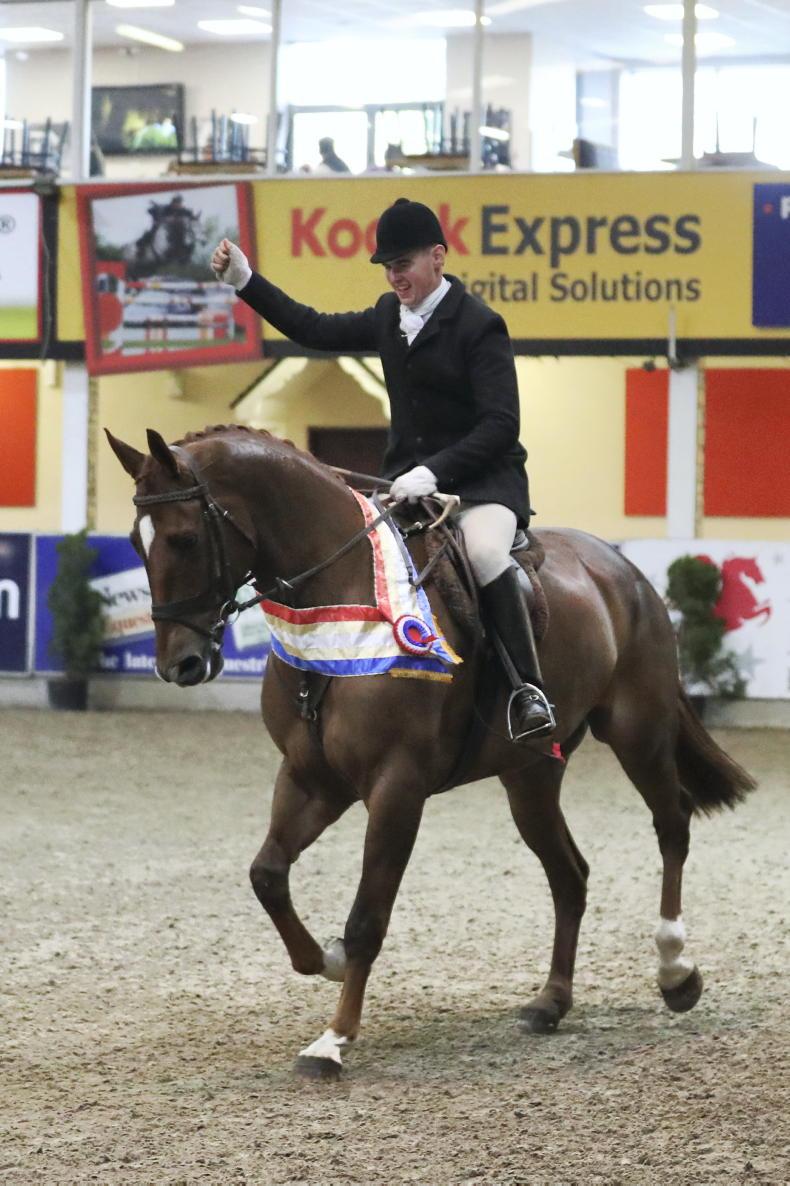 Ciaran Feldman celebrates his win with his own KBF Paved With Stars in the Festival Supreme Working Hunter Championships at the Northern Ireland Festival at Cavan / Laurence Dunne Jumpinaction.net

THE highlight of the three-day Northern Ireland Festival, which was held last weekend in Cavan Equestrian Centre, is the judging on Sunday evening of the Festival supreme working hunter championships and, more often than not, the horse title goes to an older animal who is well-known on the working hunter circuit throughout the country.

That trend was bucked this year as Ciaran Feldman was beckoned forward into the supreme championship spot on his own six-year-old British-bred gelding, KBF Paved With Stars, who, earlier in the evening, won the 90cms final en route to overall success. The reserve supreme champion was Katie and Alison Crozier’s Mountview Silver Fox, winner on Saturday evening of the 80cms final where KBF Paved With Stars finished second.

Feldman, who is based at Joanne Quirke’s yard in Rathmolyon, Co Meath, started showing his supreme champion last year when working with leading British show horse producer, Jayne Ross. “I showed ‘James’ when his owner, Debbie Harrod, was unable to do so, and that included at the Royal International,” said the 20-year-old. “I really loved the horse and when we were at the Horse of the Year Show, which was my last week working with Jayne, Debbie asked me if I’d like to buy him and I jumped at the chance.

“I’m not going to take him to Balmoral as he will have a bit of a break now. Because he’s not Irish-bred, we can’t go to Dublin so will compete at shows around the country with my main aim – a bit of a longterm one – being to qualify for and compete at the 2023 Horse of the Year Show! At the moment, I have one other horse, a five-year-old Supreme Ginger mare but she’s going to Goresbridge next week (where she is catalogued as Lot 81).”

A chesnut by the Dutch Warmblood stallion Wish Upon A Star, KBF Paved With Stars was bred by Michael Cook and Tony Reynolds out of the Irish Sport Horse mare Berkeley Square, a 2006 daughter of Maltstriker.

The Croziers’ Irish Draught gelding Mountview Silver Fox qualified for the supreme on Saturday under Gwen Scott for the very good reason that Katie fell from a Connemara roughly 10 weeks ago and fractured her neck. She is sticking to the flat only and was on board the grey when he claimed reserve supreme honours on Sunday night.

The Gortfree Hero five-year-old was bred in Co Mayo by Eileen Barker out of the Grey Macha mare, Ballygarris Grey. The week after next, the gelding is returning to Balmoral Show to defend his title in the ridden Irish Draught class. Last year, he was exhibited by Willie Corrigan under the name Gortfree Rocky as he was also known when qualifying for the Connolly’s Red Mills Champion of Champions final at Killossery.

While Katie will be on board Mountview Silver in that flat class, Scott will partner him in the four and five-year-old performance Irish Draught class and the five- and six-year-old working hunter class. “We’ll then try to qualify for Dublin,” said Scott who, tomorrow, competes with the gelding in the final of the Equine Awards NI performance horse championship at Gransha Equestrian. 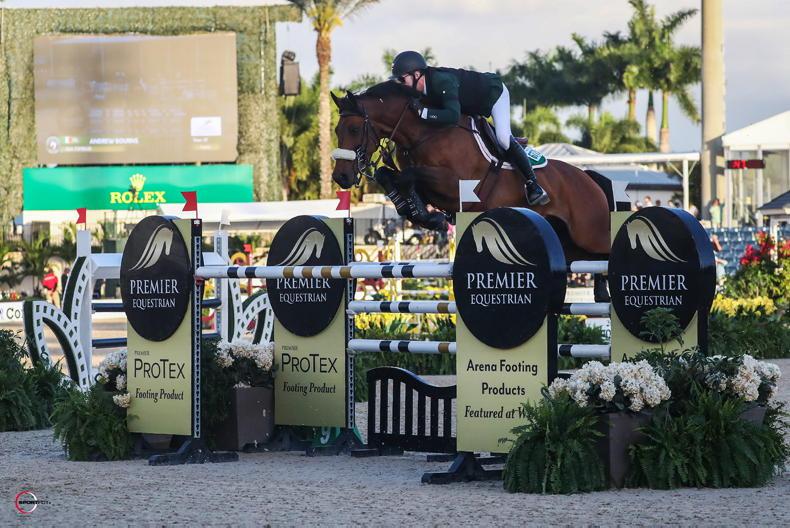 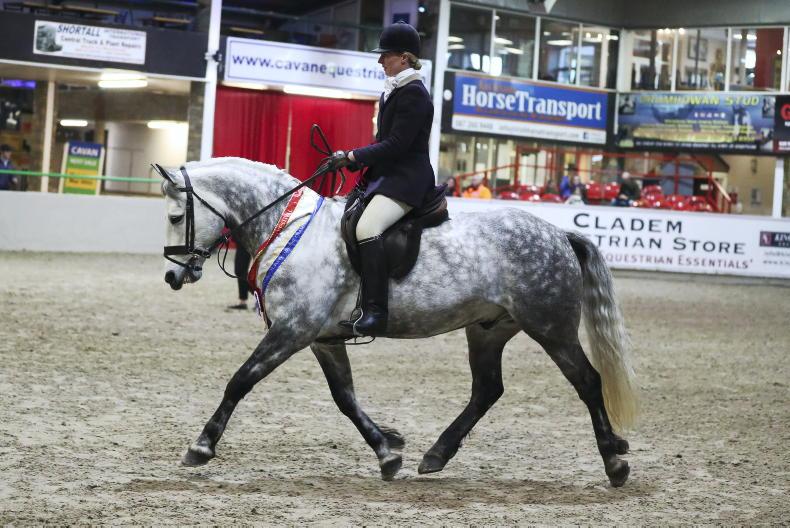 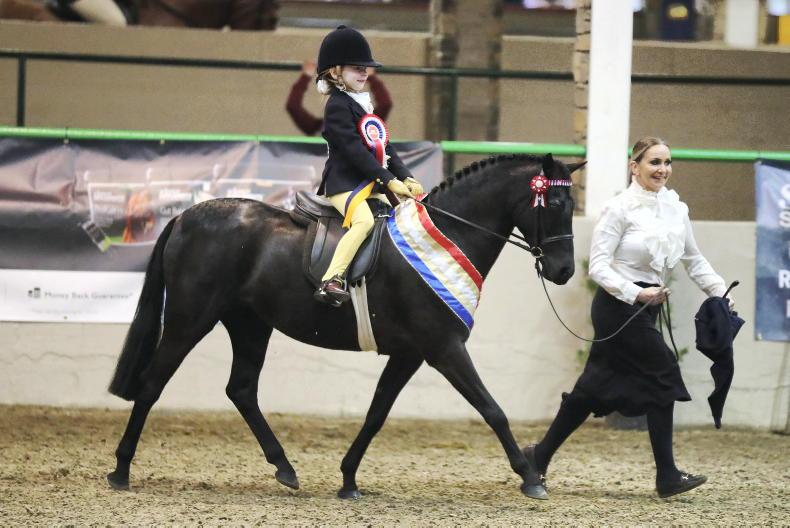 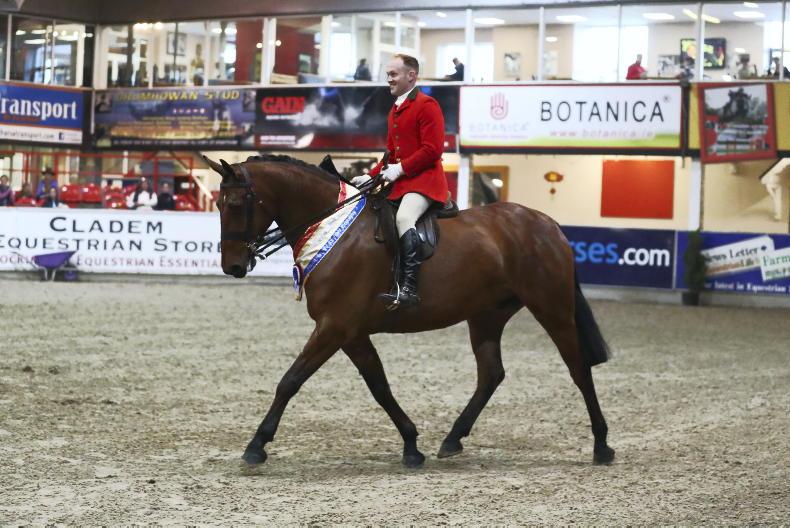