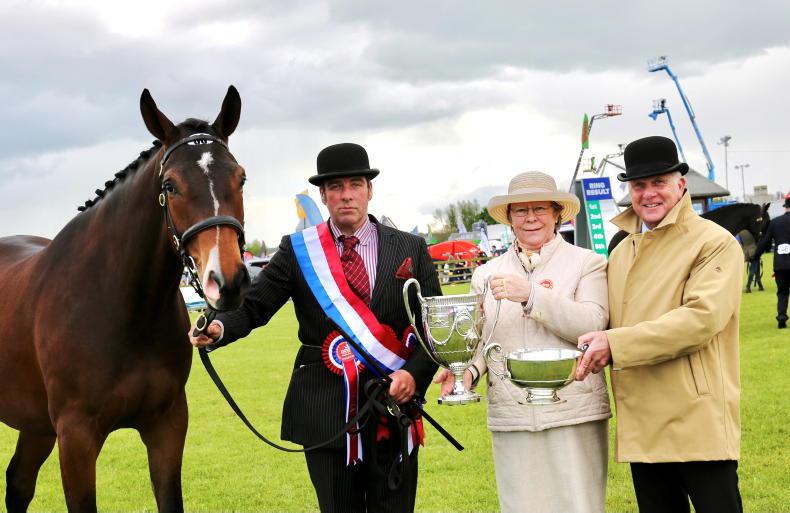 THERE were good-sized classes throughout the youngstock section of last week’s Balmoral Show and an interesting tussle between the overall champion and the reserve, which started here last September, could continue not just for the remainder of this season but through to next year when the pair of Irish Sport Horses are due to appear under saddle.

At the re-scheduled 2021 show, Bloomfield Breagura, who went on to be two-year-old champion, won his lightweight geldings’ class ahead of Woodview Firestarter. In the P&O Arena last Wednesday week, judges Magnus Nicholson and Patricia Stirling stuck with that order in the three-year-old lightweight geldings’ class and when they crowned the pair their champion and reserve three-year-olds and their supreme and reserve youngstock champions.

Expertly shown by Michael Lyons, Bloomfield Breagura is owned by Co Wicklow’s Jane Bradbury and Daphne Tierney with the former being presented with the Sir Milne Barbour cup as breeder/owner of the supreme champion. The bay is by Tullabeg Stud’s Belgian Warmblood stallion, Dignified van’t Zorgvliet who had a good show, out of the unraced thoroughbred mare Katoda (by Indian Danehill).

“Michael does a great job showing the youngsters as he is always in the right place at the right time,” commented a delighted Bradbury. Lyons obviously did his job well late last month at Thomastown Show as Bloomfield Breagura qualified there for the All-Ireland three-year-old championship at Bannon & Rathangan which, following a short break, will be his next target before Dublin.

Woodview Firestarter, who is by the deceased thoroughbred stallion Greenan Fort, was also well-shown on behalf of his Co Down owner/breeder, Yvonne Pearson, by Paul Jones. The bay is the eldest of three foals out of the 2013 Munther mare KIEF Queen B who won her broodmare class earlier on Wednesday. When he is finished on the in-hand circuit, one can expect to see Woodview Firestarter appear under leading show horse rider, Lesley Jones.

The medium/heavyweight geldings’ class was won by James McWeeney’s Longstone Bahrain Captain, shown by Adrian Hurst whose wife Shirley was nursing a sore shoulder and doing her best not to get up on any of the carnival rides despite the pleas of her children.

Although registered as a bay, this flashy chesnut ISH by CC Captain Cruise was bred in Co Leitrim by Martin McGlynn and, being out of the Glen Bar mare Glenda Bahrain, is a half-brother to the national Grand Prix jumper Mohill Rosetta (by Omar).

The winning three-year-old filly was the Rory Lavery-shown Greenhall Ruby who owner Ann Lyons purchased as a foal from her Co Wicklow breeder, Derry Rothwell. Making her showing debut, the ISH is a daughter of Rothwell’s own traditionally bred stallion Greenhall out of the Brilliant Lad mare JVK Lady Marmalade.

The 2022 Fautras Horse Trailers champion two-year-old was Dessie Gibson’s newcomer and winner of the geldings’ class, the ISH KIEF Dream Catcher, a Dignified van’t Zorgvliet ‘uncle’ of Woodview Firestarter having been bred by Kieran Fahey out of the Kings Master mare, Madame Noir.

Here, the reserve, and overall champion filly, was Shirley Hurst’s intriguingly-named home-bred ISH bay Tattygare Me Me Me (by Arkan) whose full-sister, Tattygare Its All About Me, was second in her three-year-old class here last September and is due out under saddle for the breeder this season.

The fillies are out of the Iroko mare LCC Yoko who was bred in Co Cork by none other than Kieran Fahey.

The champion yearling was the ISH filly Jordans Sunray Celebrity who was bred by her Castlederg exhibitor, Roz Collier-Hindley, out of the Cavaliere mare Errigals Little Gem.

The latter, who retired to stud with 90 Showjumping Ireland points to her credit, is a half-sister to the Pacino mare, Aprils Pacino Time (CCI3*-S).

Jordans Sunray Celebrity is by the 2011 Zangersheide stallion Avo’s Jordan Z (by Air Jordan Z – Vukarla, by Libero H) who was jumped by Kerry Taggart from the spring of 2015 through to August 2018, amassing 69 points. “Unfortunately, he was injured when he was five, when we first collected semen off him, and while he came back from that injury we had to stop with him in 2018.

“Since then he was covering naturally, mainly our own mares and those of friends, but now that we have sorted out the AI, we are promoting him more widely. He had great scope and a brilliant technique as a jumper and has a wonderful temperament. I’d say his stock will be jumpers but Carol Gee has sold a five-year-old (Fernhill Khalida) to England as an eventer.”

Co Fermanagh-based Taggart didn’t get to see Jordans Sunray Celebrity win her class and championship but did plait her the previous evening.

The reserve champion yearling was also a filly, the traditional ISH Barnaview Singing Queen who was bred by her Co Mayo owner Mary Murphy out of the Clonakilty Hero mare Barnaview Queen. The grey, whose full-sister Barnaview Dancing Queen was runner-up in her two-year-old class, comes from the second crop of the thoroughbred stallion Singing’N’Dancing who Mary and her husband Hughie stand at their Barnaview Stables outside Swinford.

Kilkenny’s Dermot Molloy won the yearling colt or gelding class with his ISH bay King Of Kerry. This gelding by Lagans OBOS Quality was bred in Co Kerry by Dan Dalton out of the Oke Boy mare Last Of The Line.