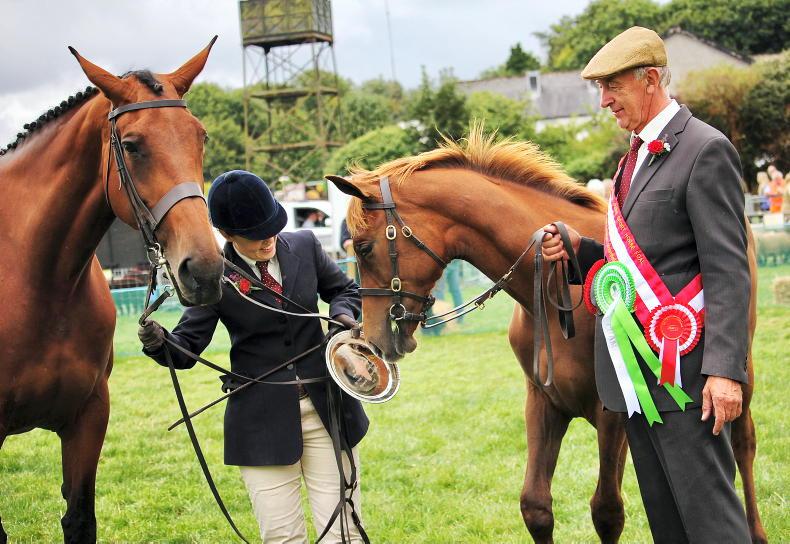 Derry’s All Ireland traditional foal champion, his Move To Strike filly out of Greenhall Wishing Well, admires her reflection in the Grattan-Bellew salver \ Susan Finnerty 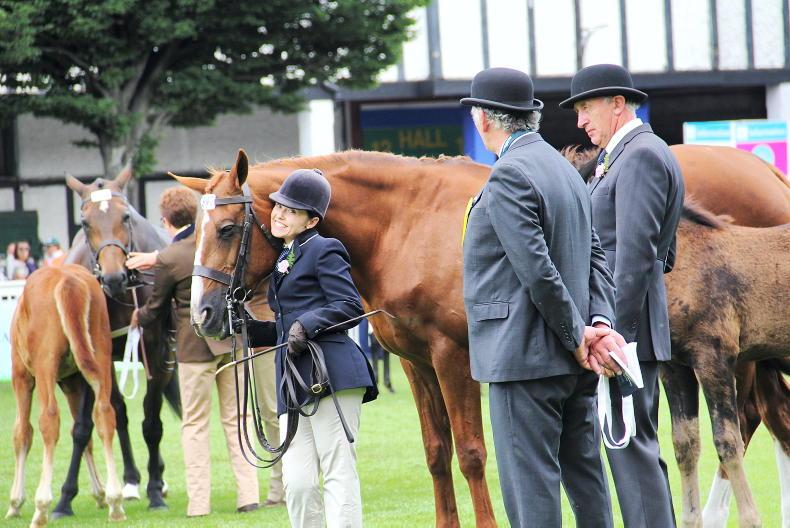 Derry and daughter Mary with Millennium Cruise in the 2016 The Irish Field Breeders' Championship. Greenhall Indicator with Fiona Doggett, part of the team, and steward David Lalor also picture \ Susan Finnerty
Previous Next

TINAHELY’S Derry Rothwell competed ponies in the early days while his father focused on horses. When he grew out of ponies, he moved to showing pedigree and commercial cattle the length and breath of Ireland.

At that time one of the most prestigious shows was the Spring Show in the RDS, where he won many livestock championships. When his father Derek, a renowned horse judge and producer, retired from showing horses Derry moved his focus to horses.

He showed horses with his wife Emily (who had showed horses before meeting Derry and show jumped too in the RDS main arena), while their daughters Mary showed ponies and Sharon showed cattle.

On many occasions, both cattle and horses were seen to unload from the lorry together at shows. One of these occasions was at Tullamore, where Mangan Junior (Weavers Web x Blue Laser) was the champion broodmare, Drum Wilma the champion Simmental and Mary and her pony Ruby won the show pony person of the year final and the famous colour television!

In Tinahely, Derry farms a mixed farm of horses, cattle and sheep. Springtime is always busy with lambing, calving and foaling, then the showing season takes over. The youngest member of the family, grandson Stephen, has a keen interest in poultry so there may well be hens added to the lorryload in the future.

1.Congratulations on your recent All Ireland traditional foal final win at Mountbellew. The same Move To Strike foal was the traditional foal champion at Limerick where her dam Greenhall Wishing Well won the Limerick Matron. One of many show ring triumphs to pick from for your proudest moment as a breeder?

We had a great season thankfully and our foal by Move To Strike, standing at Clohamon Stud, finished off the year on a high.

Also, I was very proud recently to see Greenhall Derry River (Crosstown Dancer) fly the flag for Traditional Irish Horses and Greenhall breeding when he won a bronze medal at the European junior eventing championships and was also delighted to hear that Greenhall Mullord (Dignified van’t Zorgvliet) was selected for the five-year-olds at the world championships in Lanaken this week.

Breeding is not plain sailing, so these moments are very special. Interestingly, Mullord’s dam Millennium Cruise was very successful in the show ring herself, winning the RDS Breeders’ Championship and has bred many international performance horses.

2. Favourite broodmare, past or present?

My favourite broodmare would have to be a toss-up between Cailín Deas (Mr Lord x Bassompierre) and Barronstown Girl (Touchstone x Fermanagh Girl). They both bred a lot of RDS champions. We are fortunate to have retained these dam lines, which play a big part in our breeding programme, including our Crosstown Dancer stallion Greenhall, a direct son of Cailin Deas.

3. How many broodmares do you have?

There are four owners of mares in the Rothwell family, so between us all about 20.

We had 17 foals this year, including Greenhall Dot’s surprise set of Dunsandle Diamond twins! Scanned with one, we were not expecting two to arrive! Thankfully I was with the mare when foaling, as the small one would not have made it out of the sac unaided.

He had a will to live and is thriving. He couldn’t stand for about a week, so a two-hourly rota to bottle feed him was made. We called him Peanut, as he was so small.

We actually had a competition on the Greenhall Sport Horses Facebook page during the summer to pick a name for his brother.

We had lots of great suggestions but I think we’ve settled on Big Brother, as he is quite literally the bigger brother. We will be confirming this shortly on the Facebook page.

5. Describe your winter regime for mare/youngstock.

For the winter, youngstock are mostly housed in groups in large open sheds and fed on haylage and a small amount of concentrate. The mares are mostly in open sheds with access to a few acres for exercise and are mainly fed haylage and minerals.

6. Have you changed your breeding policy over the years?

I haven’t changed my breeding policy very much over the years as I have been using about 50% continental blood for a good number of years.

7. What markets do you mainly breed for?

I try to breed a good looking horse with exceptional movement and incorporate enough pedigree for eventing or showjumping. I’ve found a lot of interest in the show horse market as the true-to-type ones are getting hard to find.

It definitely takes a team effort and the home team consist of myself, Emily, Sharon and Mary and grandson Stephen. When it comes to show time I’m blessed to have a great team who I can rely on; Fiona Doggett, Sharon Mannion, Roseanna Lalor, Trevor Horgan, Michael Lyons, Tom Foley and John Wafer are some of the great friends that are willing to help out when needed. I’ve many other great friends on the showing circuit and if in trouble at a show they will always stand in to lend a hand too.

Aside from in-hand, I sometimes have a ridden hunter competing also. In the past it’s mainly been the mares that we were retaining for breeding, like Wishing Well and Pushbutton. This year Aubrey Chapman showed a four-year-old heavyweight gelding Greenhall Robin Hood (Dunsandle Diamond x Fast Silver) at Dublin and was the four-year-old ridden hunter champion. Unfortunately, as the ridden hunter championships clash with the broodmare classes, I didn’t get to see him in the main arena, which I would have loved to.

This is a tricky one to answer as I have got some very helpful advice over the years.

This has made it easier to follow the progress of our horses and also helps in marketing. It’s very rewarding for a breeder to see your prefix on horses competing internationally in many disciplines.

10. If you won the Lotto what would you spend it on?

I’d start by revamping the yard, having all the horses under one roof and staff to feed and muck out. Plus a holiday to the sunshine!