Title: BREEDERS' 10 - Padraig McKernan: 'Eyes on the stars, feet on the ground' 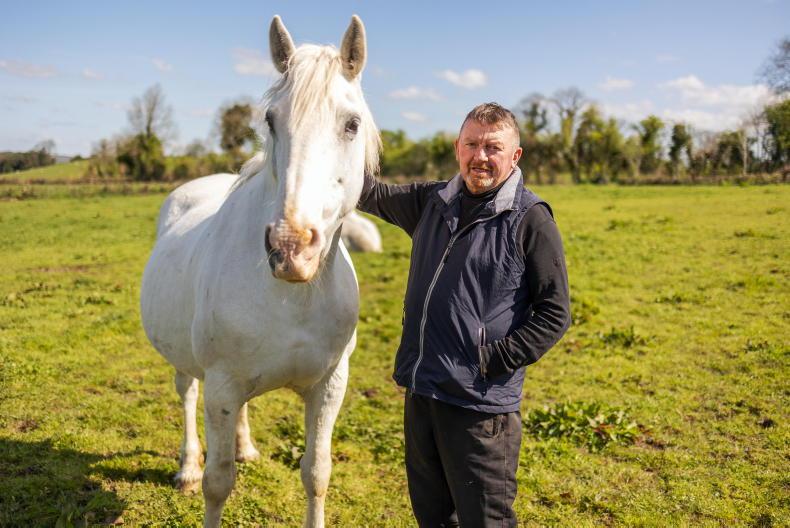 IT was in the 1960s that I had my introduction to horses. There were two workhorses on our North Monaghan rural farm in in Dernahatten, Emyvale - a place that will hopefully become better known with the inclusion of Dernahatten Vision as a Class I Draught stallion.

Growing up back then was simpler, my late father, John (RIP), loved working with horses. They were very important on the farm, from ploughing to putting in the spuds and during harvest time.

Minister Eamon Ryan would have been happy with no emissions, although bringing home the turf from the bog might have upset him!

In the 1970s the wee grey Ferguson arrived, and Lilly and Dolly got a well-deserved rest. During the summer we kept ponies for grazing for a local man. We would have learned to ride on these and many a fall we had, but being young it was all part of the fun! We would later get our own pony and as my mother hails from Cornamona in the west of Ireland, it was a Connemara filly.

In 1993, my father bought our first full Irish Draught. It was a very wet fair day in Ballinasloe, a grey filly foal by Carrabawn View - Dunmore, by Kintara. My father must have seen something special in her as he paid a decent price of IR£2,250 for her, a lot of money back then. This foal became Dernahatten Molly.

When the time came, she was broken in and my father did some bits of work with her as a hobby. She had a few foals by the thoroughbred stallion Doddington Flyer and in 2004, she was covered at Drumhowan Stud by Drumhowan Gold. The following year Dernahatten Dolly was born; my father was a very proud man when she arrived and later, passed her inspection.

Dolly bred a few foals which were sold as yearlings. In 2017, on a visit to Drumhowan Stud to view their Draught stallions, I got a good look at Dunsandle Diamond and decided to use him for Dolly. Dernahatten Vision was the result of this covering.

My father passed away in 2019 and I’m sure, when he bought the filly foal almost 30 years ago, he had a vision for her then. I have no doubt he would be looking down from above now with great pride that Dernahatten Vision has achieved that at Cavan’s 2022 inspections.

1. Congratulations on breeding Thomas Duffy’s Dernahatten Vision. Tell us more about him.

Dernahatten Vision was born in 2018; a strong, healthy colt with a nice head and good limbs. One person I must credit with Frankie’s development in his three years in Dernahatten is my good friend, Angela Griffiths.

Angela and her family moved to Co Monaghan from South Wales in 2014. She was well-known back on the mainland in the show rings. Her knowledge of looking after youngstock played a big part in Frankie’s achievements; he never missed his daily feed along with his dam from when he was a week-old until he left as a three-year-old to Thomas Duffy in Co Meath.

Myself and Thomas have been friends for a number of years; he would have bought horses from my father at different times. Thomas has a good eye for a horse and he was interested in Frankie ever since he saw him as a foal. After having some health issues myself, I was happy to sell Frankie to Thomas. I wish him many years of good luck at stud and I believe Frankie will be a great addition to the Draught studbook.

Second proudest moment was in March of this year when I received a message of congratulations from well-known Irish Draught breeder, Tanya Kerr from Manor in Co Donegal, congratulating me on Dernahatten Vision achieving Class 1 at the stallion inspections.

3. Why do you breed Irish Draughts?

Irish Draught horses are an ideal breed for a lot of disciplines. They can be used for hunting, eventing, jumping and a lot more. They are ideal for crossing with other breeds and of course their temperament leaves them very suited to today’s leisure riders.

4. What is your template for a Draught?

I like a Draught with a nice head, plenty of width, not long and narrow. A nice kind eye, calm and easy to handle, short back and a short cannon bone with a good round rib, a leg in every corner with little daylight underneath them.

About 15.3 or 16.0 hands, a lot of today’s Draughts have increased in size and its evident in the show rings where the large foal will beat the small foal.

Big is not always the best, performance is what matters most. Thankfully it’s not all about rosettes and sashes.

5. Favourite broodmare, past or present?

Dernahatten Dolly, the first Draught filly that my father bought back in 1993 in Ballinasloe. She was very intelligent and had a wonderful temperament.

At present there are two Draught mares, Dernahatten Dolly and Dernahatten First Consul (Agherlow - Cindy’s Diamond, by Flagmount Diamond). I also have a two-year-old Cloncastle Silver Squire filly and three yearling fillies; two by Inisfree the Iron Cross, that were bred by Thomas Casey in Leitrim and Manor’s Silver Callista, bred in Donegal by Tanya Kerr out of her All-Ireland winning mare, Manor Over Draught (Beechmore Silver Crest).

7. Describe your regime for keeping mares/youngstock.

Broodmares are wintered outdoors on a bit of well-sheltered limestone ground and moved to a suitable place on the farm for foaling. Youngstock are kept in a purpose-built loose shed that has a bedded, hardcore floor that I find keeps it dry - with the price of sawdust or straw, this type of building has saved money that can be used for feed instead.

High costs are going to be a problem going forward so I will hope to let crops stand for a longer period and hopefully let it bulk up and get suitable weather later to save it as haylage. I use Dengie Healthy Tummy and Stud mix as a concentrate for all the animals. I like to have the farrier check the youngstock at different times during the year and use wormers that work best for different seasons.

8. Best advice you ever got?

I remember hearing this a while back…’Keep your eyes on the stars and keep your feet on the ground’.

9. Breeding Irish Draughts - would you do it all over again?

If we were asked this question about anything that we have done in our lives we would all change something! For me breeding Irish Draughts, I would do it all over again but with some changes. Like having a more in-depth look at different bloodlines and using stallions because of their suitability, not because they are fashionable.

As our Irish Draughts and Connemara’s are spoken about as native breeds, I often wonder why someone came up with the idea that they should have their tails laced and multiple little plaits, that remind me of a lactating sow lying on her back, in their manes.

Maybe the Green Party could step in here and put a levy on rubber bands!