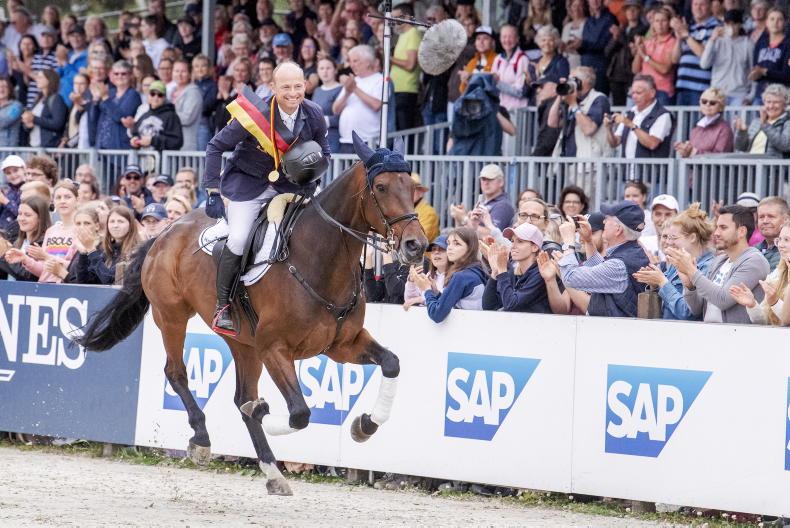 PREFIXES and name changes are always a topic of much discussion. Adding a brand name makes commercial sense to a sponsor, rider or producer, who often have the funds to bring a horse to the top or contacts to sell one into the right hands. A breeder, at the start of the chain, may not have the same advantages and in most cases, hopes for some trickledown benefits.

For a fee of 1,000 Swiss francs, the Federation Equestre Internationale (FEI) can change a horse or pony’s name; for 200 Swiss francs, it can shorten a given name, which has happened to Ard Highlighter.

The horse’s birth name is recorded on his FEI entry, along with his correct sire and dam, Natal and Ard Silhouette, although Landgraf I, listed as his grandsire, is in fact Natal’s grandsire.

His breeder Heather Dean-Wright has made several appeals on social media to Michael Jung, who together with his parents Joachim and Brigitte, brother Philip and Anette Schmid, is listed on FEI’s database as the horse’s owner since 2018, to restore the Ard prefix.

“It’s wonderful to have bred a horse who gets to be under the seat of such a top rider, I mean top. The horse gets every chance and does not disappoint,” Heather told The Irish Field this week.

“Ard Highlighter is the first in the whole family to have been lucky enough to be bought by a professional rider and look where they are going. In his last six (three-star and three four-star) events, he has not been out of the top-two placings.”

She is understandably proud of the horse’s record with Jung, a rider she admires, recalling how the horse instantly transformed when he tried him at friend Caroline Bjoerk’s yard.

For her, the fact that a couple of keyboard clicks have deleted a prefix and by association, generations of home-breds, is disappointing. Ard is short for Ardmulchan, near Navan where Heather and her late mother Margo, a lady noted for her animal charity work, bred horses for decades.

Notes on a hand-drawn family tree of Ard Highlighter, sent by Heather, illustrate how many generations went into building this line.

“I won loads of events and did Punchestown three-day-event with her. I’d go to the beach, let her loose and run along the beach with her. I’d stop and go, she would do the same. That’s the sort of rapport we had, you had this part-bred Arab breeding and rapport that came down quite strongly along the family.”

Covered by Sky Boy, the result was Ard Replica, whose name sparked off a ‘copy’ theme for this line. For example, Ard Replica’s King Henry daughter Ard Image.

She herself was crossed with the home-bred 1.50m show jumper Ard Black Cat, a son of another home-bred resident stallion in Ard Allez Cat, to produce Ard Intimate, Highlighter’s future grandam.

Ard Intimate was later sold to U.S rider Susan Robshaw and competed there at two-star level. Her daughter Ard Silhouette, by the thoroughbred Lion D’Or, was retained by Heather and is the dam of Ard Highlighter. Both his sire, Natal and grandsire Lion D’Or were two more ‘in-house’ stallions.

“I lost his mum [Ard Silhouette] when I was unable to get my own vet after foaling.The vet who came removed her retained afterbirth, she haemorrhaged and died. I never want to see a horse go through that again.”

“The whole family brought amazing success stories for their ‘mostly’ amateur riders, like what Ballymacad Copper Beech did for me, and her Badminton mother before her.”

She feels Ard Highlighter, originally produced by her son Conan and then for one season on the Eventing Ireland circuit by Elizabeth Power after Heather sold him to Caroline Bjoerk, has many family traits.

“He was not a big mover, he was not the amazing jumper some showjumpers are, but he was brilliant and like his mother line, would try his best to be do what ever you asked. Something you just can’t see from the outside, a heart of gold.”

Foaled in 2011, Ard Highlighter was registered with the Breeders Elite Studbook for Irish and European Sporthorses (BE/SIES). “Originally I started with the Anglo European Studbook (AES). [Founder] Henk Minderman valued performance above everything else and when he next set up SIES, my horses went on that. That’s the reason he’s registered with SIES.”

“I knew the family like the back of my hand,” she said about the four resident stallions and six generations of mares going back to Killala, that have produced the Luhmühlen four-star winner.

Heather was just about to return home when we spoke on Tuesday night from Larry Dunne’s yard where she was collecting a mare carrying a Chacco-Blue embryo. “That’s the thing, you keep the dream. Keep the dream.”

The Ard prefix back on Highlighter’s name is another dream.