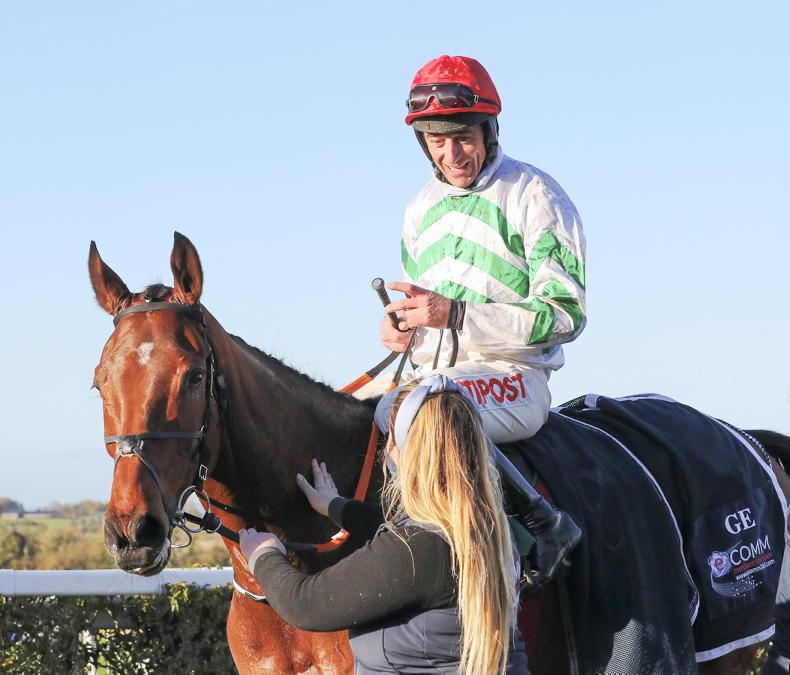 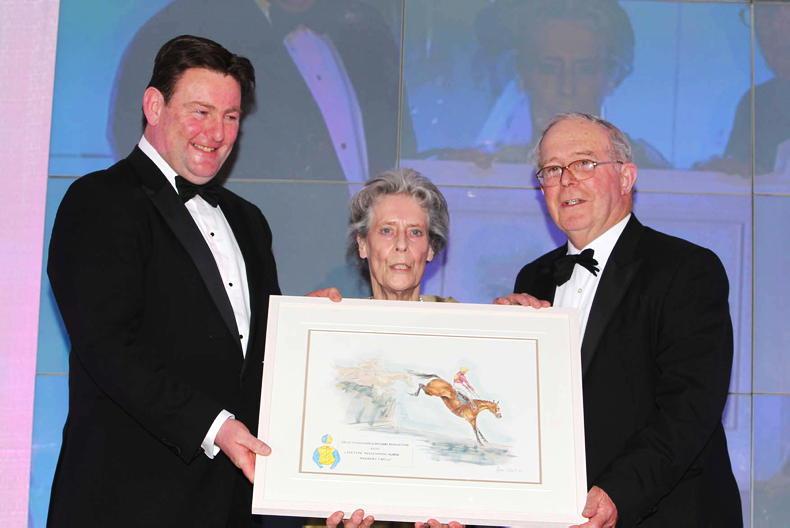 Pat Downes with Máire and the late Martyn McEnery whose family have been involved with the family of Hollow Games for some four decades \ carolinenorris.ie
Previous Next

HOLLOW Games is certainly a name that we are going to become very familiar with. Racing for Noel and Valerie Moran’s Bective Stud, the five-year-old son of Beat Hollow (Sadler’s Wells) extended his unbeaten run to five with his victory in the Grade 3 Monksfield Novice Hurdle at Navan, a journey that started with success on his sole start in a point-top-point.

Bred by Margaret Wall, Hollow Games sold as a foal for €17,500 at Tattersalls Ireland, reappearing two and a half years later at the Goffs Land Rover Sale where he realised €28,000. If that was not a very profitable pinhook, the same could not be said about the next sale price he recorded at the 2020 Tattersalls Cheltenham Festival Sale

Bought by James Doyle’s Baltimore House Stables at the Goffs Land Rover Sale, Hollow Games ran out the winner of his debut point-to-point at Turtulla by a distance, the weekend before he sold at Cheltenham. Ross Doyle and Noel Meade were among the vanquished as Aidan ‘Mouse’ O’Ryan and Gordon Elliott struck for the gelding at £255,000. Doyle revealed that he owned Hollow Games with Andrew Latta.

Now, with two bumper starts and wins, and the same record over hurdles, Hollow Games is one of the rising stars of National Hunt racing, but he still has a way to go to emulate the achievements of some of his close relations.

A second winner for his McEnery family-bred dam I’m Grand (Raise A Grand), he is from a family that has served John and the late Martyn McEnery well for almost four decades.

I’m Grand showed nothing in a couple of starts over hurdles, but she was worthy of a chance in the breeding shed. She is one of half a dozen winning offspring from the unraced Eva Fay (Fayruz), and that breeding would suggest that she would be more likely to produce sprinters than National Hunt winners. The best of the six successful progeny of Eva Fay was Tumbling Dice (King’s Theatre), a horse whose career I followed closely.

Bred by John McEnery at Rossenarra Stud, Tumbling Dice was owned by a friend of mine Lucy Donegan and trained by her cousin Tom Taaffe. Lucy and her husband John had many great days with Tumbling Dice and the gelding biggest win came in the Grade 2 Hilly Way Chase at Mallow, and he was Grade 1-placed. In all he was successful seven times over hurdles and fences.

Eva Fay’s dam Mittens (Run The Gantlet) won a bumper and a hurdle race at the age of four, but that was nothing to what she achieved at stud. She bred seven winners, three of which are worthy of special mention. First to make a name for himself was Remittance Man (Prince Regent). Bought at the Derby Sale by Nicky Henderson, he was noted for his brilliant jumping and nervous temperament, and he was a firm favourite with racing fans.

Over hurdles he won two of his dozen starts, including the Grade 2 Bristol Novices’ Hurdle, and was never out of the first three. When switched to fences he showed immense improvement and won 13 of his first 14 races over the larger obstacles. In his first season his wins included the Grade 1 Galloway Braes Novices’ Chase at Kempton and the Arkle Challenge Trophy at Cheltenham. In the 1991/1992 season he added the Grade 1 Queen Mother Champion Chase at Cheltenham and the Melling Chase at Aintree.

The following autumn he won the Grade 2 Desert Orchid Chase at Wincanton and the Grade 2 Peterborough Chase at Huntingdon, but then sustained a serious tendon injury. He won his comeback race in February 1994 but that was to be his sixteenth and final victory.

There was quite a contrast with the next big race winner out of Mittens, Teach Dha Mhile (Kampala). The name is the Irish word for Two-Mile-House, a village outside Naas in Co Kildare. Initially trained by Dermot Weld, and the subject of a fundraising effort by the parish after which he was named, he was a Group 3 winner at two. Sold to Italy, he later was runner-up in the Group 1 Premio Jockey Club e Coppa d’Oro, and went to stud eventually as the winner of nine races.

Three years after Teach Dha Mhile was foaled, the McEnerys welcomed a son of Bob Back (Roberto) and he went on to become the third important winner for Mittens, Treble Bob. Not surprisingly he too found his way to Dermot Weld’s Rosewell House Stables and raced in the yellow silks of Michael Smurfit.

His career ended with a tally of 11 victories, five on the flat and three each over hurdles and fences. A Grade 1 novice hurdle winner at the Punchestown Festival, he was also successful in the Kerry National at Listowel.

Beat Hollow stood nine seasons at Banstead Manor Stud before moving to Ballylinch Stud. He was a very effective sire, capable of getting winners over a variety of trips and in different codes. His best-known son was Wicklow Brave, a classic winner and multiple Grade 1 winner under National Hunt rules, while his daughter Proportional won the Group 1 Prix Marcel Boussac at two.