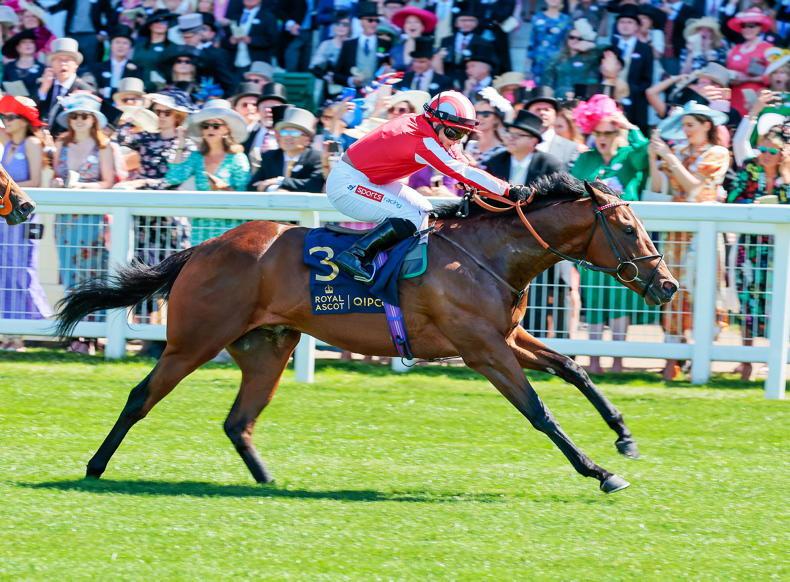 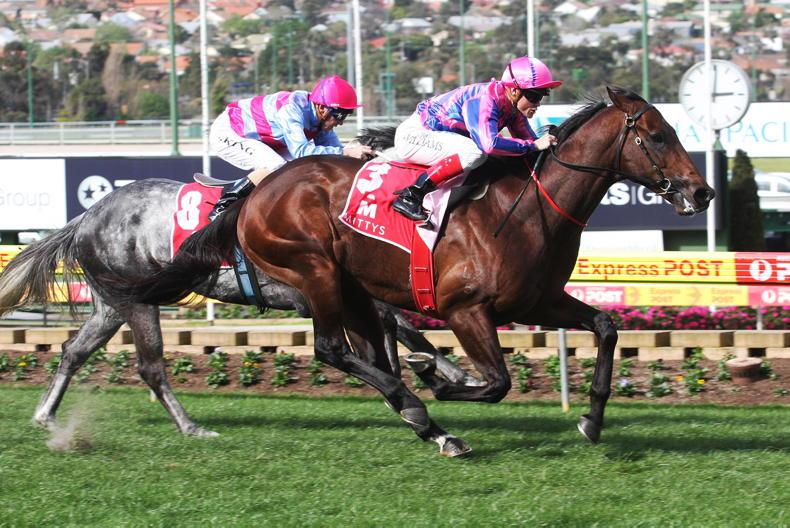 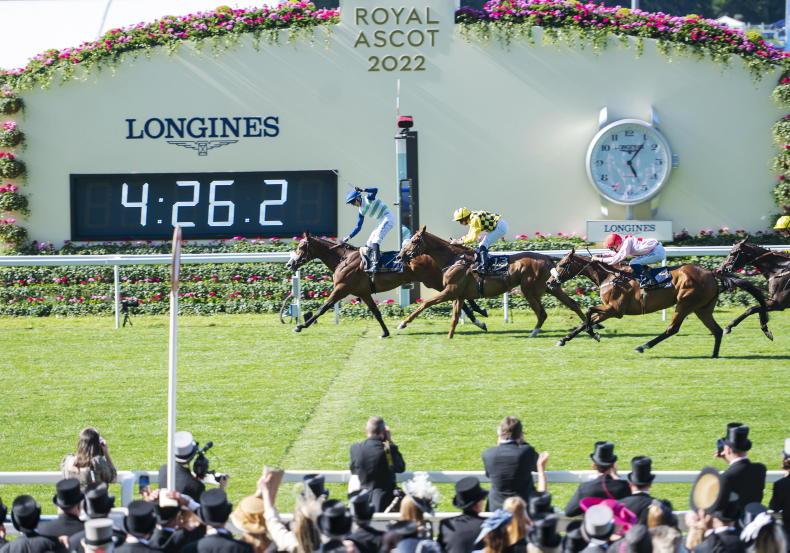 THE stallion-making Coventry Stakes is the first group race for two-year-olds in Britain each year, and has enjoyed Group 2 status again since 2004.

This year’s winner, Bradsell, won his debut at York by no less than nine lengths, and yet went off at 8/1 for the Royal Ascot opening race for juveniles. He belied those odds in great style, and gave his sire Tasleet his first blacktype as a stallion. Bradsell is one of five winners from 15 runners in the first crop of the Shadwell sire, one that numbers just 69 in total.

What a bargain Tasleet has been, standing for £6,000 for two seasons and £5,000 for the most recent two. A Group 2 winner of five races, he was runner-up on three occasions at Group 1 level, meeting stars such as Harry Angel, The Tin Man and Librisa Breeze each time. His dam is a half-sister to the dam of Battaash (Dark Angel).

The first thing you notice with the pedigree of Bradsell is the fact that he is just one of a pair of blacktype horses in four generations, the other being his dam Russian Punch (Archipenko) who won a listed race at two. What the family lacks in blacktype it makes up for with winners and toughness.

Yorkshire-based Deborah O’Brien is the breeder of the Coventry winner who was raised at Bearstone Stud in Shropshire. Bradsell has changed ownership on three occasions. His yearling purchase for £12,000 at the Tattersalls Somerville Sale in September 2021 was by Highflyer Bloodstock on behalf of Harry Dunlop. The colt was then prepared for the breeze-up sales by Mark Grant and sold at Goffs UK for £47,000 to Blandford Bloodstock.

Following his stunning debut success, in a deal brokered by Oliver St Lawrence, he was sold again to Victorious Racing, the ownership banner used by Shaikh Nasser bin Hamad Al Khalifa of Bahrain.

Deborah O’Brien lives in Goldsborough, which in the late seventeenth century was home to one of thoroughbred breeding’s three foundation stallions, Byerley Turk, and she first got involved in racing when she part-owned Bradsell’s fourth dam, Champenoise (Forzando), in the early 1990s, and later went on to buy her outright.

O’Brien chose a Bearstone stallion for the mare’s first covering and has since boarded all her mares at the Holdcroft family’s stud. She now has seven broodmares. She said: “The whole family is just hardy; they race and race, and try and try, but to get a winner at this kind of level is fantastic. I fell in love with Champenoise and, although she never won anything other than a seller at Yarmouth [at the age of four], she was the only horse in Michael Bell’s yard never to be visited by the vet.”

Sadly O’Brien lost this year’s foal from Russian Punch, and then rested her. She will offer the mare’s yearling colt by Ulysses (Galileo) at the Goffs UK Premier Sale this autumn, and retained Bradsell’s three-year-old filly May Punch (Mayson) who won at Ripon last month.

Nature tears strips off the opposition

WHAT a special racing moment it was on Tuesday to witness the best sprinter of the world winning the Group 1 King’s Stand Stakes. ‘Winning’ doesn’t really do him justice – he demolished an international field, and in the process registered win number 21 in 38 career outings.

Twice champion sprinter in Australia, his winnings are one race short of £7 million, and his latest win was his ninth at Group 1 level. Highlights down under include winning the T J Smith Stakes at Randwick three times, the last being recorded in early April on his last run before Ascot, and he had doubled up in the Darley VRC Sprint Classic at Flemington.

Another of Nature Strips wins came in the Group 1 Lightening Stakes, a race also annexed by his Widden Stud sire Nicconi (Bianconi) when he was rated the champion three-year-old sprinter in Australia. Talking about following in his parent’s hoofprints, Nature Strip’s Group 2 wins include the 2018 edition of the Ian McEwen Trophy at Moonee Valley, and his dam Strikeline was successful in the same race 13 years previously, then a Group 3 contest, while Nicconi won it in 2009 – a family affair.

Three of Strikeline’s six wins were at stakes level and she was runner-up in a Group 2. She is also dam of a second stakes winner in The Barrister (Star Witness). Strikeline is a half-sister to the Group 3 winner Bashful Girl (Perugino), and the latter’s full-brother Bashboy (Perugino). He won the Crisp Chase four times, the Grand National Chase three times and the Thackeray Chase on three occasions.

Star sires to the fore

GROUP 1 winners and homebreds Baaeed (Sea The Stars) and Coroebus (Dubawi) have already been the subjects of features in Breeding Insights, but it is worth says in few words about each.

Apart from extending his unbeaten run to eight, in facile fashion, in the Queen Anne Stakes, the most heartening sight after the race was the four-year-old being led back into the winners’ enclosure by Sheikha Hissa, daughter of the late Sheikh Hamdan Al Maktoum.

Not only has Baaeed’s pedigree been reviewed among these pages, but his full-brother Hukum (Sea The Stars) was too after winning the Group 1 Coronation Cup at Epsom. He brought to three, along with Zelzal, the number of top level winners by the great Sea The Stars (Cape Cross) out of Kingmambo (Mr Prospector) mares.

he Group 1 2000 Guineas winner Coroebus, raced and bred by Godolphin, won an exciting Group 1 St James’s Palace Stakes, doubling up on the well-trodden double for milers. His classic success meant he was the 49th Group 1 winner for his sire, and one of the stallion’s 149 group winners. The latter figure was added to at Wednesday’s fixture. Victory in the opening day centre-piece at Royal Ascot gave Dubawi his 85th success in a Group/Grade 1 race by one of his progeny. Dubawi is Darley’s flagship stallion.

Dubawi doubled up on Tuesday when another Godolphin homebred, the six-year-old Dubai Future, beat the previous day’s Goffs London Sale graduate Cadillac to land the 10-furlong Listed Wolverton Stakes. A previous winner of a pair of listed races at Meydan, Dubai Future is a son of the Grade 3 winner Anjaz (Street Cry).

COROEBUS carries an Irish suffix, as did two other winners on the opening day. The five-year-old Coltrane (Mastercraftsman) beat the Willie Mullins-trained favourite Bring On The Night, to land the biggest win of his career in the two and a half-mile Ascot Stakes, no doubt to the delight of Mitch Barry, stud and racing manager at Rockfield Stud in Ovens, Co Cork.

This 50,000gns sale choice by his trainer Andrew Balding, Coltrane is the first winner out of the unraced Montjeu (Sadler’s Wells) mare, Promise Me. She is a daughter of the Group 1 Irish 1000 Guineas winner Hula Angel (Woodman). Stamina was never in doubt for this family as that classic winner bred the Grade A Galway Hurdle winner Tigris River (Montjeu) and the Grade 3 Weatherbys Ireland GSB Hurdle winner A Fist Of God (Sadler’s Wells).

The last race on the day went to Get Shirty(Teofilo), bred by Haras du Mont Dit Mont, and this French listed winner and Group 2 placed six-year-old gelding was picked up for just €30,000 last summer at Arqana by Jason Kelly Bloodstock. What a shrewd buy he was. This is the female line of Group 1 winners Sea The Moon (Sea The Stars), Seismos (Dalakhani), and the full-siblings Samum (Monsun), Schiaparelli and Salve Regina.