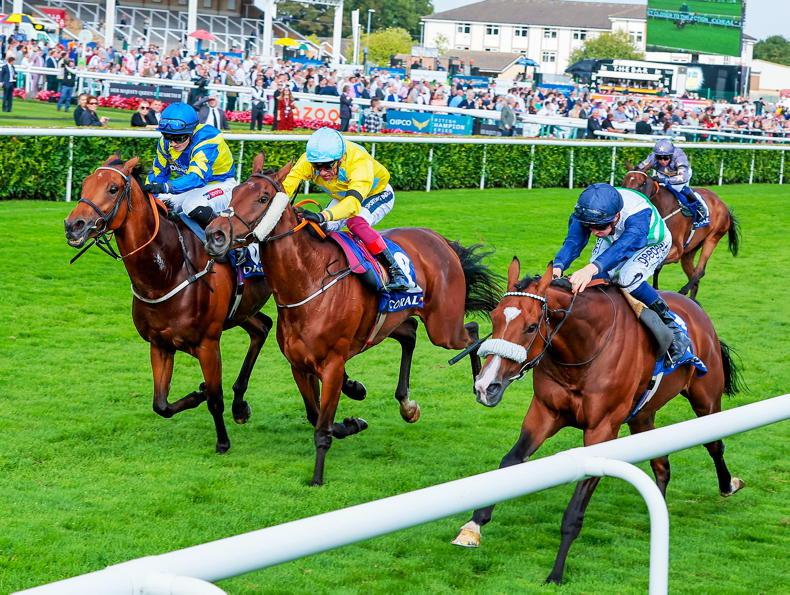 THE betting for the Group 2 Doncaster Cup suggested it would be a stroll in the par for 2/9 favourite Trueshan and Hollie Doyle, but occasionally we are reminded that there are no certainties in this game.

Alan King’s star stayer met his match on the day when unable to run down the well-ridden Coltrane (Andrew Balding/David Probert), the winner scoring by neck, with Henry de Bromhead’s Lismore (Frankie Dettori) a short head behind in third, having made a gallant attempt to make all the running.

On top of this unexpected reversal, Hollie Doyle also picked up a four-day ban for her use of the whip in the straight.

It’s clear that Trueshan didn’t run up to his best here, and he wandered off a true line when asked for his final effort, something which may have cost him victory.

The ground was clearly not an issue, but Alan King was inclined to blame the fact that Trueshan ran on faster ground at Goodwood on his previous start and was unwilling to let himself down.

Whatever the reason, it’s to be hoped that he can bounce back, but credit must go to the 9/1 winner, who was a place behind Trueshan in the Goodwood Cup before finishing second in the Lonsdale Cup at York last month.

Coltrane has enjoyed an excellent season, looking a tad unlucky when second in the Chester Cup, and taking both the Ascot Stakes and the Coral Marathon subsequently.

He’s a tough and consistent stayer, and while he probably didn’t need to improve in victory here, he may have more to offer.

Andrew Balding praised his toughness and is already looking forward to 2023 with the son of Mastercraftsman.

“Coltrane has done us proud,” said Balding after the contest. “He’s had a long season and we keep thinking he’s going to cry enough, but he’s so tough and game.

“We were a bit concerned about the ground because he didn’t shine the last time he ran on very slow ground, but he’s a star. He’s a course-and-distance winner so the Gold Cup at Ascot is an obvious race for him, but we’ll just enjoy today.”

Ralph Beckett’s Kinross has been in fine form of late and added to his City of York Stakes win last month by adding the Group 2 Park Stakes to his CV under a confident Frankie Dettori. The 5/6 favourite was always well positioned and took over from the pace-setting Al Suhail (Charlie Appleby/Will Buick) inside the final furlong, and soon had his race won, although Sheila Lavery’s New Energy produced a strong late burst under Oisin Orr to take him into a clear second place, a length behind the winner, and a length and three-quarters ahead of the fading Al Suhail.

The winner had his ideal conditions, namely seven furlongs and easy ground, but he was carrying a penalty for his York win, so this comfortable success may go down as a career-best effort, and Beckett is keen to make amends with another crack at the Group 1 Prix de la Foret at ParisLongchamp next month, a race he was a fast-finishing fourth in a year ago.

“Kinross got a bit far back in the Foret last year,” said Beckett. “Frankie just said ‘We know each other now’. I’d imagine we’d go straight there. He’s not a horse now that needs any work, he’s become very straightforward to train. He’s really come of age.”