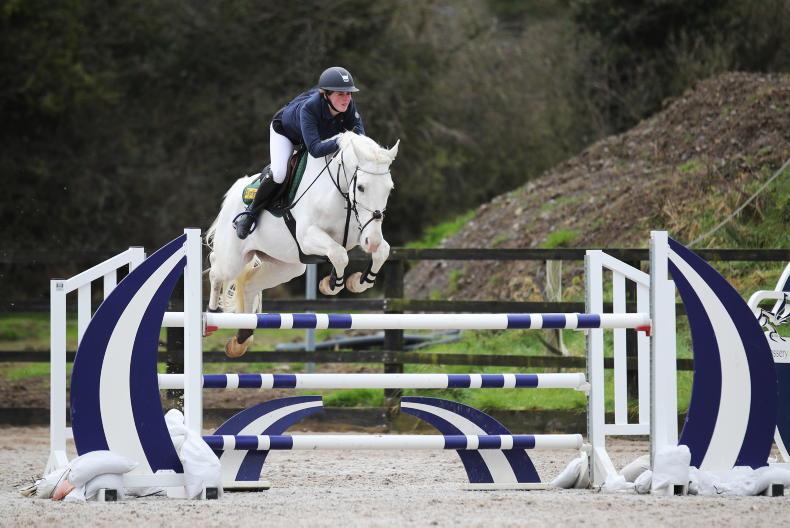 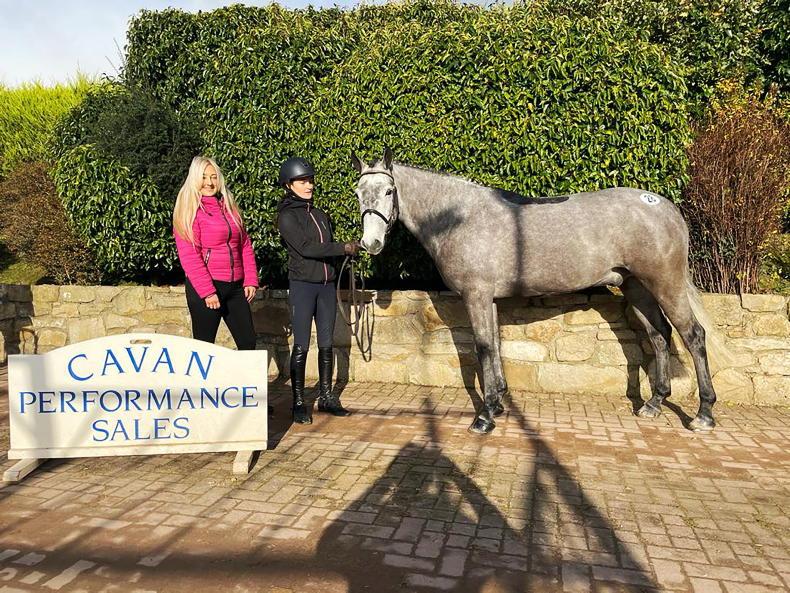 Seamus Killoran’s 148 cms gelding Lincoln Rowan (Lot 28) was knocked down to Ballinasloe’s Laura Geraghty for €15,500. The five-year-old is by Murvey Ronan out of Ding Dong \ Cavan EC 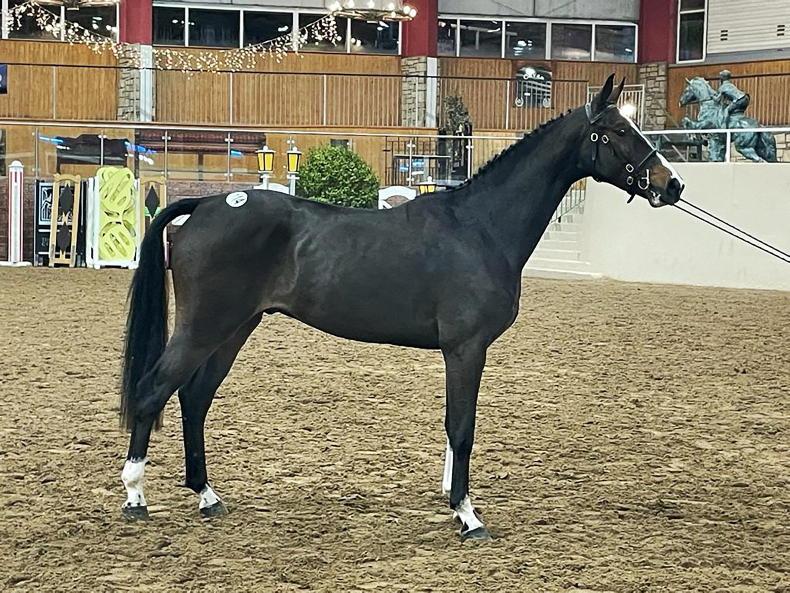 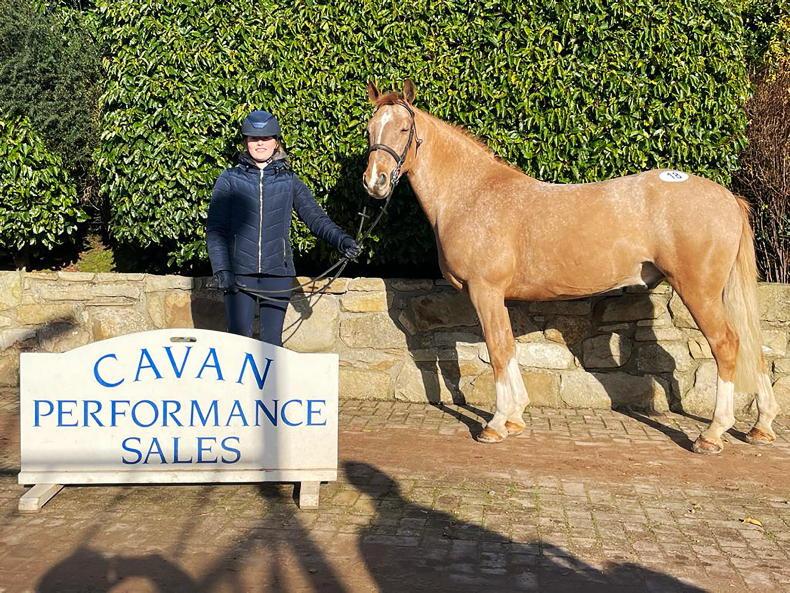 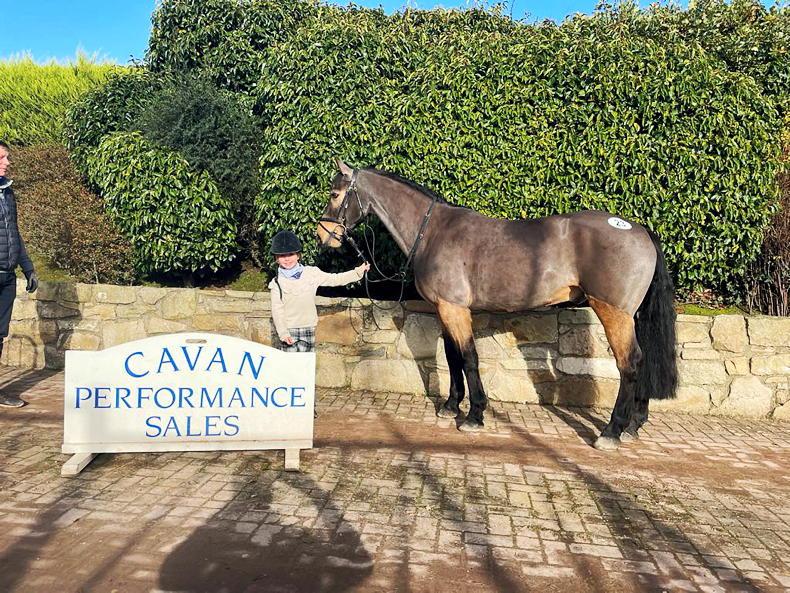 BRINGING the curtain down on one of their best trading years to date, Cavan Equestrian Centre’s sales’ season ended on an all-time high. Wednesday’s performance sale delivered an outstanding set of returns which, headed by a top price of €30,000, closed with an average of €6,228 (€3,987 in 2020) together with a good clearance of 76% (62%).

Demand was at its strongest for the older stock and ponies, and while the clearance of the three-year-olds was a little more reserved, several realised significant returns.

Topping the day’s trading by a distance was Fortside Farm’s well-known jumper European Cruise (Lot 44), an 11-year-old by Cruising out of Hortensia De Litrange (Quel Hero de Muze). The leading horse in several leagues, and the winner of 864 SJI points, the handy-sized gelding has racked up no less than 87 individual wins in the past three years and, under Robyn Moran, many of these in the young rider ranks.

Bred by Clement Stapleton, and a former RDS six-year-old campaigner under James Hogg, he was bought from Paddy Sweeney some three years ago. “He has won everything there is to win,” commented owner Brian Moran. “He’s been the diesel money horse the whole way through, and is only being sold as Robyn is progressing onto bigger horses, and has a lot of youngsters coming on.”

Indeed Robyn is currently competing in Spain, and as a result the grey was was not ridden at the sale but led around the sale ring.

The lucky recipient of this schoolmaster is 14-year-old Ciara McGrath who, as a successful pony rider, qualified to jump in the RDS this year. “We knew of the horse before the sale, and of course he has an excellent record,” explained her father Colm McGrath. “Ciara is still riding ponies, and we wanted a nice first horse to act as a transition. I hope he will be as half as lucky for us as he was for the Moran family.”

Although not quite realising the heady heights of the €30,000 sale-topper, Keith Wilson’s five-year-old gelding (not a mare as catalogued) HTS Jensen R (Lot 88), by Tolan R, also sold well at €17,500. Sourced as one of two unbroken purchases (the other realised €10,500 later in the sale) from Co Louth breeder Brian Kieran, this smart sort is out of HTS Lady Clermont by Rhyne Clover.

“He’s a very, very nice horse,” enthused the Co Monaghan farrier and producer. “He had only been ridden for a month before the sale, but I think he will go on to be a top one.”

One person hoping so will be the successful buyer Heidi Hamilton who, unable to attend in person, was bidding by telephone. “I saw him advertised a few days before the sale and thought to myself ‘he’s a Heidi horse’ and made the contact,” she said. “Ideally I would have liked to have viewed him in the flesh, but I had bought my last horse (the subsequently successful event horse Johan-Some) unseen, so we contacted Cavan and arranged to bid on the phone. Once he was secured, I jumped in the lorry and collected him late the same evening. Now he’s home I’m thrilled and so excited. He knows nothing, but he’s very trusting.”

Standing out among the remaining five-figure returns was Kenneth Graham’s Tullabeg George (Lot 76), a six-year-old by Dignified van’t Zorgvliet out of Tullabeg Hero (Cult Hero). This gelding, who is currently competing up to 1.20m level, had clocked up 83 SJI points and was knocked down to Gaynor Wheeler for €13,000.

The pony trade was on the fire from the get-go, and peaked when Seamus Killoran’s 148cms gelding Lincoln Rowan (Lot 28) was knocked down to Ballinasloe’s Laura Geraghty for €15,500. Bought to trade on, the five-year-old was by Murvey Ronan out of Ding Dong (Drimcong Cove) and, probably the pick of the bigger ponies, was certainly the catalogue standout on paper. He had enjoyed a fully rounded education in most disciplines, together with a recorded total of six SJI points to date.

There were a further two five-figure returns in the sector, the first of which at €11,200 fell to Kathryn Lynch’s The Real Clover (Lot 18), a six-year-old 138cms gelding by that good jumping pony sire Moores Clover out of Water Pebbles. Another eyecatcher, and winner of 134 SJI points in classes up to 1.10m level, he had also hunted with the Duhallow Foxhounds.

A strong trade at the top end saw several good returns in the four-year-old sector, the best of which at €11,000 was for James O’Reilly’s unnamed gelding (Lot 94a) by Je T’Aime Flamenco out of Huntingdale by Cruising. British show producer Hallie Crowe accounted for this lot who, bred by Vincent Burton, is a sibling to numerous graded jumpers. A further four made in excess of €10,000.

As always the three-year-old buyers were the most discerning group, but one who did appeal at €14,400 was Donal O’Connor and Stephen Howley’s unnamed gelding (Lot 114) by Sligo Candy Boy out of the imported Aishling Grannus (Grannus). A well-related three-parts brother to the 1.60m jumper Sligo Hard Times (Jose Bono Rodgriguez) by Balou du Rouet, this gelding was secured online by British event horse owner David Miles.

As the breeder and stallion owner, Padraig Howley, commented afterwards: “The dam was a mare that my son Keiron bought over from Germany. She died earlier this year, but we have three more out of her coming through.”

There was just one further five-figure price and at €11,000 this fell to Yvonne Purtill’s filly (Lot 152). British traveller Kim Sherman had waited all day to secure this lot, by Je T’Aime Flamenco out of Norway Beo (by Beowulf), a half-sister to the event horse Penhill Celtic (CCI4*), ridden by Boyd Martin, and the multiple Grand Prix-winning jumper Norway Venture (1.40m).

(Note: Cavan’s Thursday and Friday sales report and results will be in next week’s issue)