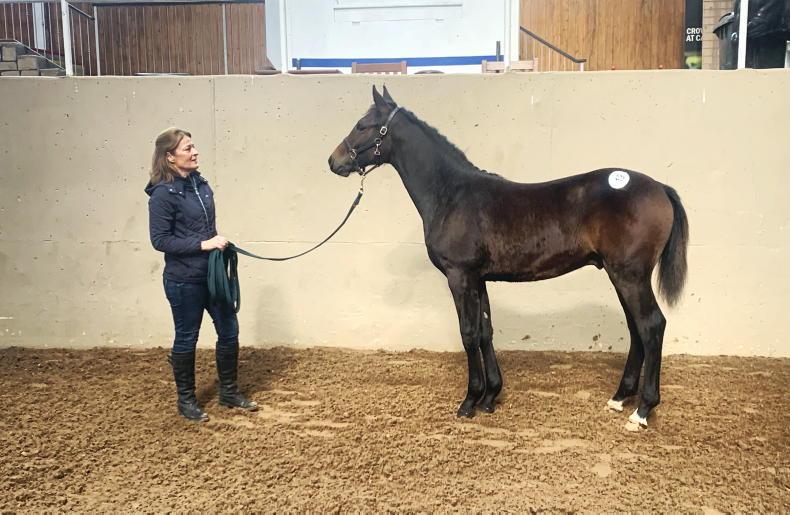 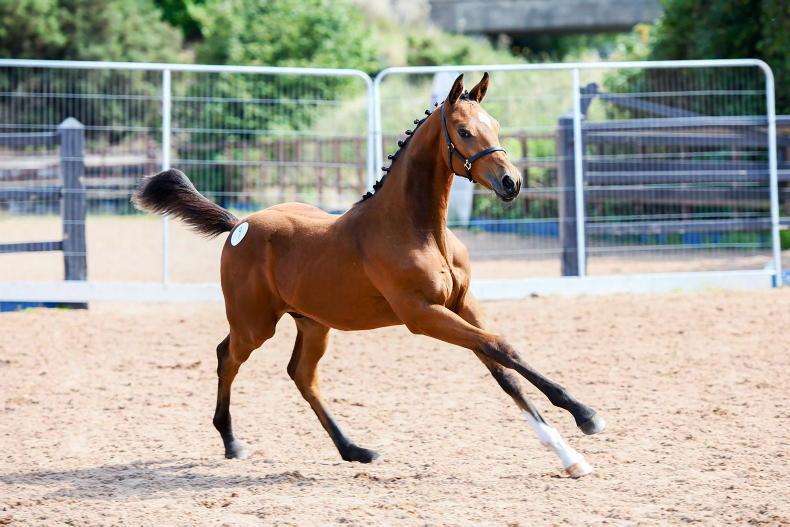 Consigned as Lot 19, Carnally Reuben is out of Reel’s Porsch mare Carnally Lavender Belle who did a small bit of registered jumping herself under the name Porshas Sister. “What I noticed when looking at the catalogue was that the dam is a full-sister to Porscha, who I well remember jumping. I only saw the colt at the sale and he struck me as a rangy, athletic, modern-day foal that should make a jumper down the line.

“I didn’t breed many foals myself this year so decided to buy a couple but this was the only one I bought here,” continued Moloney. “I thought there were a lot of nice, well-bred foals in the sale but, I think, that when you have an elite section (here, the Premier Selection), breeders expect to get a lot more for those animals than the non-elite ones are making and I’d say a lot of very nice foals went home.”

In addition to being a full-sister to Porscha (CSI3*), the sales-topper is a half-brother to the Cavalier Two For Joy gelding Cartoon (CCI3*).

A late substitution in the Premier Selection, the Stephanie Vallet-bred My Name Is (Lot 59), was knocked down to Britain’s Graham Smith for €7,250. This June-foaled chesnut colt by Qlassic Bois Margot is out of a Trizano Masseure mare from the family of the 1.60m siblings Chat Botte du Ruisseau Z and Heidi du Ruisseau Z.

Randalstown’s Gillian Creighton went to €7,200 to secure Annaghquin Foxy (Lot 43), an early April-foaled filly by Zirocco Blue VDL. Consigned by Philip Swaile of Ballynakilly Farms, the chesnut, who is out of the Royal Concorde mare Annaghquin Lady Jane (CSI4*), a half-sister to the Ard VDL Douglas gelding Shannondale Douglas (CCI4*).

Connor Wilkinson’s Sirlandro Boy (Lot 39), the last lot before the start of the Premier Selection, was purchased by Michael Condon for €7,000. This April-foaled bay colt by Colandro is out of the Sandro Boy mare Kilcorig Legacy.

Padraig Connolly’s late May-foaled colt CSF Olympic Playboy (Lot 83), who was knocked down to Philip Murphy for €6,700 may well be by Cornerado VDL, but his dam, Olympic Clover, is by Clover Hill out of a Sky Boy mare. The grey is a half-brother to the Cruising stallion CSF Olympic Cruz (CSI3*) among others. Back to the Premier Selection where Hartwell Stud’s Jonathan McCann’s Valkafcruz (Lot 58), a late April-foaled filly by Kafka Van De Heffinck was purchased by Ray Thornton for €6,250. The bay is out of the Valent mare Valmay Cruise, a full-sister to Clovalent (1.40m).

The early June-foaled SIEC Livello filly LHE Tilly Lady (Lot 44), who was consigned by her Co Wicklow breeder Louise Hegarty, was secured for €6,000 by Omagh’s Michelle McIlhatton. The bay is out of the Ramiro B mare Its Too Easy whose previous produce include the BGS Ocean View gelding SRS Newgrange (1.40m) and the Quidam Junior I mare Ballinteskin Gaia (1.30). Its Too Easy is a sibling to Dam Easy (CCI3*-S and 1.35m).

Foals certainly dominated trade with the top-priced yearling being Joshua Russell’s home-bred Annie Be Sure (Lot 42), a chesnut filly by Creevagh For Sure who was purchased by Trade Horse Ltd for €2,500 while the top-priced broodmare was Samantha Fegan’s Atlantic Bounce (Lot 107) who was knocked down to Ralph Trenier for €2,600.