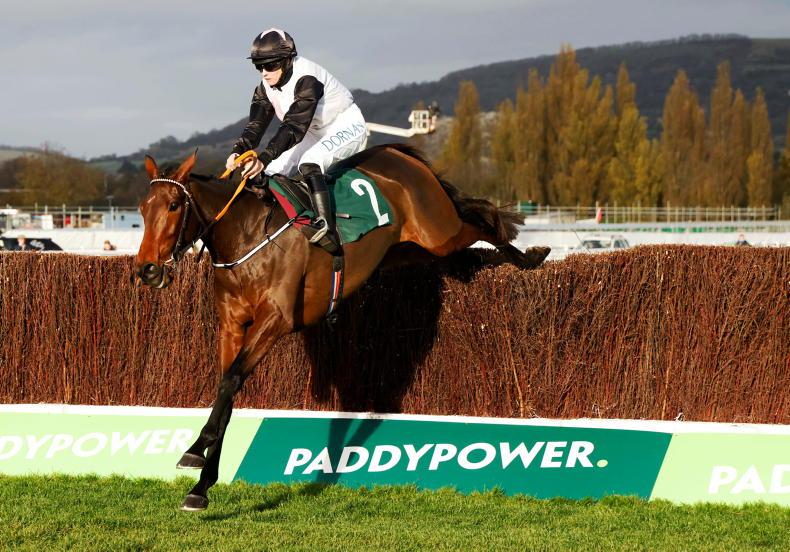 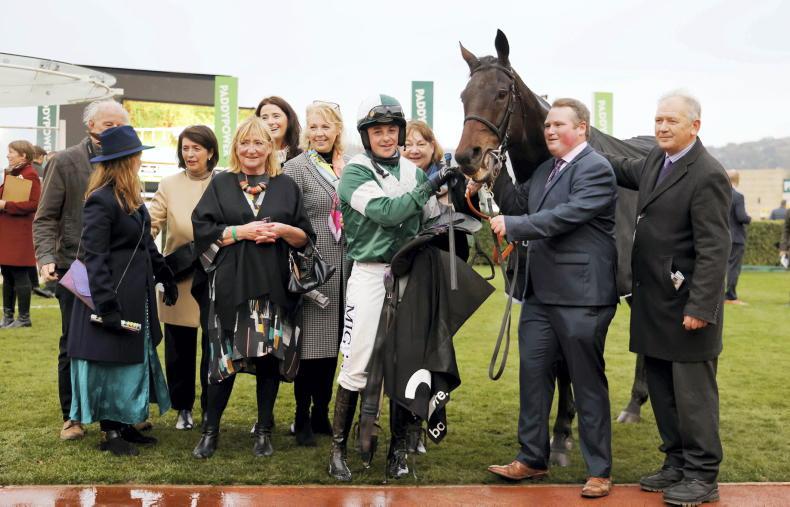 THE talking point before the first day of Cheltenham’s November meeting was the fact that the SSS Super Alloys Novices’ Chase was a match, and whether such contests should feature on television, or indeed at all.

The race was still the talk of the track after racing had finished, after it had turned into one of the most bizarre spectacles seen at Cheltenham in many a year.

As expected, Gin On Lime and Rachael Blackmore had set a fairly modest pace for hot-favourite My Drogo to track, and as Harry Skelton loomed alongside on the downhill run to the straight, the pace began to lift.

The Henry de Bromhead-trained Gin On Lime was beginning to send out distress signals, and My Drogo – winner of the Grade 1 Mersey Novices’ Hurdle at Aintree on his previous start – looked to be getting the upper hand as they swung towards the infamous second-last fence.

Despite the decision to move this fence from the downhill run to the home straight, it has continued to cause problems, and is responsible for more unlucky falls than the old fence, with tit coming pretty soon after a tight home bend.

Even in this two-horse race, the fence again caused carnage, with My Drogo falling despite seeming to jump it well enough, and Rachael Blackmore somehow remaining in the saddle despite the fact that Gin On Lime hit the deck.

The mare lost all four legs, but she stayed upright, and clambered back to her feet in her own time. Now at a standstill, Blackmore had to make a quick decision as to whether to continue with just one fence to clear, or to pull up, and she chose the former option, popping the fence and allowing her mount to trot over the finishing line. (The stewards subsequently cautioned the rider to take more time to assess the welfare of her mount).

Blackmore admitted that she didn’t think for a second about calling it a day, feeling that her mount never felt like she wasn’t willing to continue, and that she was back into a canter of her own accord, albeit needing her rider’s encouragement to get enough momentum to clear the last safely.

The decision to continue in such circumstances is likely to be a talking point, especially as the remounting of fallers has been banned on welfare grounds. I’ve seen exhausted and even injured horses remounted in the bad old days, but there is a significant difference between jumping straight back on a horse who has fallen, and continuing on one who has come to a halt after a bad error.

In the latter case, the rider is always in contact with the horse, and in a much better position to judge whether their mount is sound. Blackmore is an outstanding rider, and made the judgement to continue based on how the mare she was riding recovered her feet and showed a willingness to continue.

I’m certain that had she thought Gin On Lime was not moving properly or in any distress, she would have dismounted immediately.

Henry de Bromhead felt that the winner was not at her best on the day, a notion backed up by Rachael Blackmore, and she will now be given an extended break – one which was already in the offing before this run, it should be noted.

My Drogo remains a top-class chasing prospect, but is likely to be sore after his tumble, and he may also benefit from a bit of a break after this unfortunate experience.

THE day started with a big-field handicap hurdle for conditional jockeys, and provided an unexpected winner for Wexford native Peter Kavanagh, who came in for the ride on Fergal O’Brien’s Art Approval only when intended rider Liam Harrison cried off after a fall at Sedgefield on Thursday.

Harrison rode out on Friday morning, but felt he wouldn’t be able to give 100% on the well-backed 100/30 winner, thereby giving Kavanagh a first Cheltenham winner on his first ride.

Morning favourite Skatman was very weak in the betting on handicap bow, and the Paul Nicholls-trained novice failed to cope when the pace lifted down the hill before staying on.

He’s better than this run suggests, while An Tailliur was backed into favouritism, but was unlucky to slip on landing at the very first hurdle, eventually depositing the unfortunate Kevin Brogan on the hallowed Prestbury park turf. Not how he’ll feel about it, however.

Editeur De Gite, a last-fence faller at Ascot last month, came in for a fine ride from Dungarvan-born Niall Houlihan – also having his first Cheltenham winner – to win the two-mile handicap chase, the combination winning only narrowly from Stolen Silver (Charlie Deutsch) after Gary Moore’s gelding idled on the run-in to give Sam Thomas’s runner-up a chance.

The margin was a neck, and the pair were well clear. Moore is keen to aim Editeur de Gite at the Red Rum Chase at Aintree as a long-term plan, as main owner Steve Preston is from Runcorn, and would love a winner at the Grand National meeting.

Martin Keighley had to endure the heartbreak of having a Festival winner disqualified after Any Currency failed a drug test after winning the Glenfarclas Cross Country Chase in 2016, so he was delighted to have found a potential replacement in the shape of the talented Back On The Lash, who finished best under Sean Bowen to deny La Touche Cup hero Singing Banjo (Philip Rothwell/Barry John Walsh) by a neck in a thrilling finish.

The 2019 winner Diesel D’Allier, making his debut for Richard Bandey, looked sure to win when jumping the last big and well, only to be run out of things up the hill.

Byrnes back on Cheltenham scoreboard

THE Hyde Novices’ Hurdle went to the Charles Byrnes-trained Blazing Khal (Donie McInerney), and the rangy gelding proved a class apart despite showing a tendency to lug to his left in the latter stages.

He and runner-up Gelino Bello got close jumping the last, but the 9/2 chance asserted in the style of a smart staying prospect up the hill, and is definitely one to keep on side, his physique suggesting he has plenty more to offer. He may not want to race on ground much quicker than this given his size, however, and his waywardness was probably ground related, too.

Herbertstown rider McInerney was, remarkably, the third Irish-born jockey to ride his first Cheltenham winner on the day, and it was unfortunate that the course commentator got both his and Peter Kavanagh’s name wrong in the call.

A small point, but an important one for riders who will want to keep the videos of their wins as a souvenir of a special day.

The last race of the day brought another Irish winner when the Philip Rothwell-trained Mc Alpine gave James O’Sullivan a first Cheltenham winner.

The 33/1 shot stayed on well to beat a 50/1 shot in Castel Gandalfo and Rothwell, in and emotional interview on RacingTV, recalled his first win back with Native Jack in the cross-county 15 years ago.

“This is very special. I didn’t think it would take 15 years to get back here. Favourite place in the whole wide world. I love it,” he said. 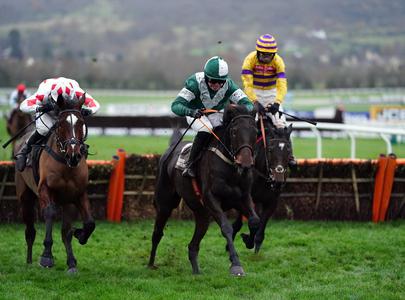 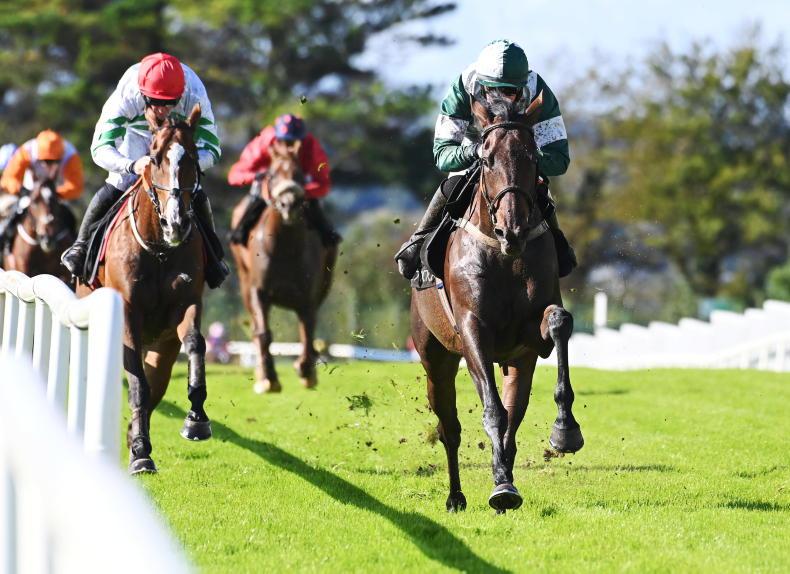 GALWAY TUESDAY: Blazing Khal on fire for Byrnes
Blazing Khal picked up smartly to take control on the run-in and score by just under three lengths