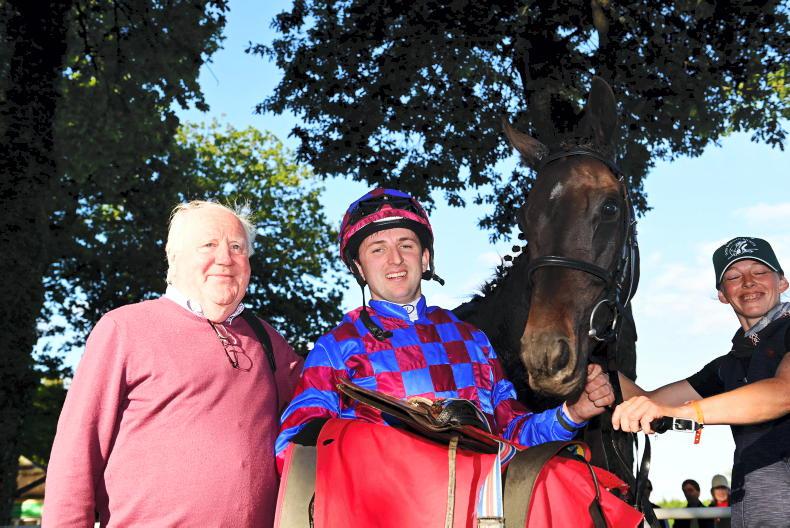 Stan Begely winner of the Corinthian Challenge in Gowran, with owner Patrick McCarthy

STAN Begley achieved a lifetime ambition this weekend when he won the second leg of the Corinthian Challenge Charity Race Series at Gowran Park Racecourse. Trained by Mark Fahey, Telecon made all to win staying on well under pressure in the final stages of the race. Advantage Point gave chase in the final quarter mile under Fiona Dowling but was held by half a length.

Ambitious Fellow was third under Darren Harrison while Takarengo and Jane Davis, who won the opening race of the series at the Curragh in July, finished fourth.

Stan works as a Breeding Management Assistant at Irish National Stud. He is the grandson of the late great Stan Cosgrove who passed away in 2019. Cosgrove was a pioneering veterinary surgeon and stalwart of Moyglare Stud for more than half a century and his namesake grandson is already making an impact in more ways than one in the racing industry.

After graduating from University College Dublin with a degree in Agricultural Science in 2016 Stan decide to continue to study at the Irish National Stud, where he participated in their breeding and management course.

Since then, he has spent time working at Arrowfield Stud in Australia and Coolmore America. Stan recently completed his master’s in Business Management with UCD Smurfit School.

Following months of personal training, early mornings riding out his diligence was rewarded at Gowan Park on Saturday. Stan commented: “It was such a thrill to win! The buzz was unbelievable, a bit surreal really. Telecon gave me a great spin around and he battled willingly up the straight. I am already looking forward to the finale of the Corinthian challenge at Leopardstown on the 22nd of October.

“I would like to take this opportunity to thank Mark Fahey and his whole team for their continued support throughout and the owner Pat McCarthy for giving me the opportunity to ride Telecon.

“The series is a great initiative to raise vital money for the Injured Jockeys fund and I would like to thank everyone who has supported me in particular my main sponsors Kildare House Hotel and Sycamore Lodge Equine Hospital.

The Corinthian Challenge is a three-race series open to amateurs who want to fundraise in a unique way while enjoying the experience of a lifetime. Fourteen riders are participating in the challenge this year.

Each rider sites a different reason for their participation, for some it simply offers the chance to experience the life of a professional jockey horse racing at some of Ireland’s best racecourses.

For most participants the reasons are personal, many challengers have close connections to those who have benefitted from the charity over the years and want to give something back.

The colourful mix of participants hail from Armagh to Kerry with interesting day jobs from insurance to engineering and even a member of An Garda Síochána taking part, every rider brings with them a unique story to tell.

Their commitment is substantial, in addition to training, riding out, getting race fit and staying sound throughout the four-month series, each rider has been tasked with a fundraising target of €10,000.

The series is run on an accumulation of points model and last Saturday’s result opens it right up with the competition all to play for in the final leg of the challenge at Leopardstown on October 22nd. In the interim, for the 14 Corinthian challengers training and fundraising will continue to support them in their quest visit, www.justgiving.com/campaign/corinthianchallenge2022.