Title: CORK SUNDAY: Mullins cousins combine with Its On The Line

Its On The Line, a ThoroughBid Sale purchase, clinched the John Thomas McNamara Series for Charlie Mullins at Cork 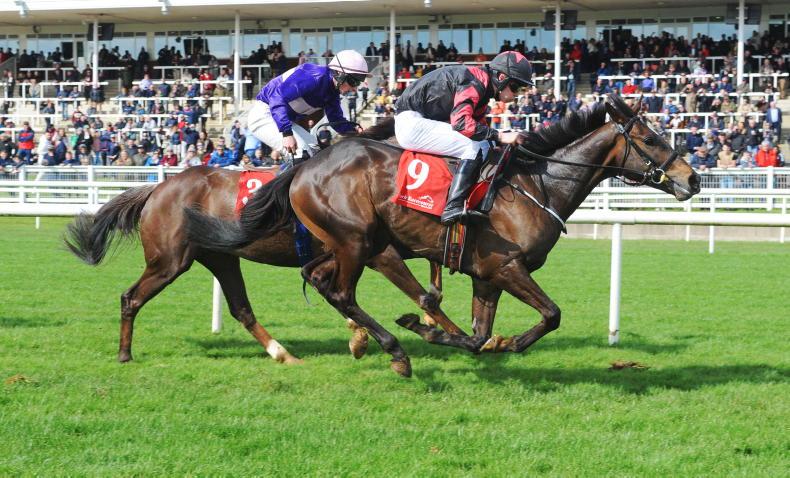 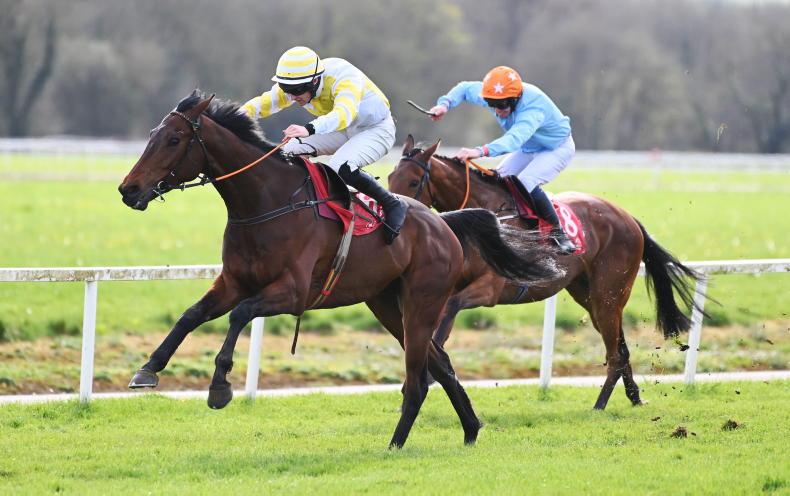 RANDOX Grand National-winning trainer Emmet Mullins helped jockey cousin Charlie Mullins secure the John Thomas McNamara Series with a success on Its On The Line (4/1) in the series finale, a hunters’ chase, at Cork on Easter Monday.

Mullins was sending out a first winner since his famous Aintree win with Noble Yeats nine days ago, and bargain buy Its On The Line was produced with a fine waiting ride to win by half a length from Earl Of Desmond.

Charlie, who was having his first ride over fences, clinched the series which is confined to riders with a 7lbs claim, with the win.

Emmet said: “That secures Charlie the series so it was great to be able to help him pull that off.

“He was a recent purchase and we bought him online at the ThoroughBid Sale (for £8,000 last month) and it was good to get a quick return. He was a Presenting and I felt he may have been waiting for good ground in the spring.

“He has a great step to him, covers a lot of ground when he is walking and has a real staying pedigree. He just needed to get a bit of confidence and I’d say the better ground will be a big help to him. He will keep going in these hunter chases for the next few months.”

Mullins was at Fairyhouse and Callaghan later commented: “He was up in trip today and it really suited him. He had a look at the first two hurdles and after that got into a great rhythm and went away nicely from the second last. If something came to him he would have gone away again.

“I had loads of horse left and the step up in trip definitely suited him. I’ve been with Willie full-time for three years.”

Garcon Doux left behind a poor recent run to cause a 50/1 surprise to land the Boulta Schooling Handicap Hurdle for trainer Philip Fenton, winning owner and wife Patricia Hogan and jockey Cian Quirke.

Following the race Fenton said: “He ran terrible the last day he ran in Gowran on heavy ground and today we said if could run a respectable race we’d be happy, but we got more than that.

“He had a nice run in Punchestown prior to Gowran and he will stay on the go for the summer. He should be alright in those rated hurdles.”

Highway back on track for Murphy

FIVE of the eight races were confined to horses with point-to-point form with the Jack Tyner Memorial Hunters Chase attracting a decent field, and it was Down The Highway (17/2) who came out on top for trainer Ciaran Murphy and jockey Timmy Love.

Murphy was at Fairyhouse where his Enjoy D’Allen finished ninth in the Irish Grand National and at Cork his assistant Dot Love said: “It is great to have the opportunity to stand in for Ciaran today and to have a winner and for my grandson to ride it makes it even better.

“Ciaran was riding out Enjoy D’Allen yesterday morning and I said can I ride this horse and he said ‘ah shur, why not’ and on we went, he was in great form! It was a brilliant ride and he trusted him. He went to the Foxhunters but didn’t enjoy that so much.”

The Eoin McCarthy-trained Ifeoinly (15/2) added to three point-to-point wins this winter with a success in the Rathbarry & Glenview (Mares) Hunters Chase, scoring for owner Brendan Walsh and providing jockey Brian Lawless with a first racecourse success.

The eight-year-old survived a final-fence blunder when beating Carrig Wells by five lengths.

“She is a lovely tough honest mare and I’m delighted for Brendan (Walsh, from Galway) who has had a great run with her this season,” McCarthy said.

Lawless, 23 from Delgany, had previously ridden 40 point-to-point winners and is based with Matthew Flynn O’Connor and Donnachadh Doyle.

The other chase on the card, the Coolmore N.H. Sires Mogul Handicap Chase was won by the Ted Walsh-trained Kildorrery (100/30), under jockey Shane O’Callaghan.

Kildorrery was left clear by the fall of chasing Nelly’s Money at the second-last, and won comfortably from R’evelyn Pleasure.

Walsh later reported: “He is owned by a lovely lady Denise Entenmann who was married to a late cousin of mine and lives in Long Island.

“The race fell asunder - six-runners, take your time and if he didn’t win today you could raffle him. Whatever danger was there fell at the second last.

“Shane kept him together nicely and he is not an easy horse to win on. Shane is there in the yard all the time and rides a bit for Ross (O’Sullivan, son-in-law) as well and is a good claimer.”

Point-to-point winner Monbeg Park swished his tail in the closing stages but won by three lengths from Senior Chief and afterwards Doyle said: “It is only by accident we have him as he did a suspensory joint when winning his point-to-point. Other than that he would have gone to the sales and made a lot of money.

“We will keep him for racing ourselves now and if he stays in one piece, you could see him winning something big. We’ll turn him out now and go hurdling next year.”

Jockey Davey Roche was the only non-7lbs claimer to ride a winner on the card, as his 5lbs claim helped Belle The Lioness to defeat runner-up Kates Hill by a neat five lengths, in the Cork & Waterford Mares’ Point-To-Point Bumper.

The winner carries the colours of Michelle Doyle and Sean Barton and with successful trainer Henry De Bromhead at Fairyhouse, his assistant and winning rider Roche reported: “She was really good. She was keen at home and it was just about getting her to switch off today and learn. She switched off, I could get into the race whenever I wanted and she quickened on down the straight.

“She was still green and was pricking her ears down the straight. She’ll do the job for us.”