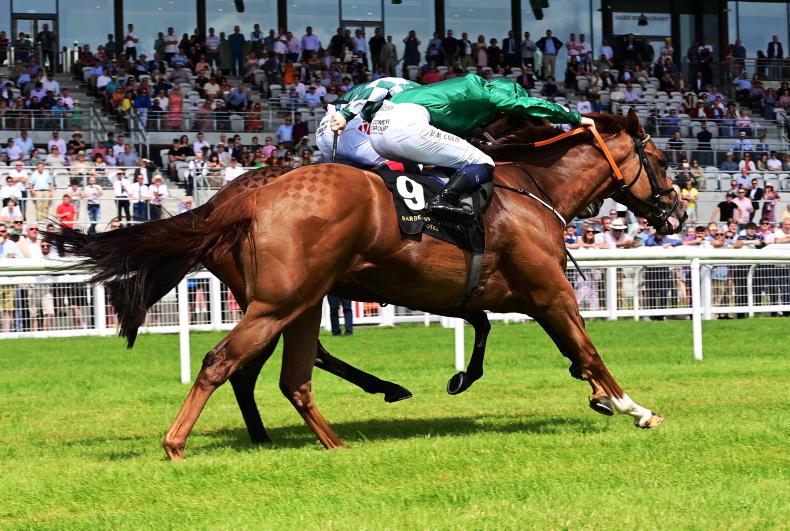 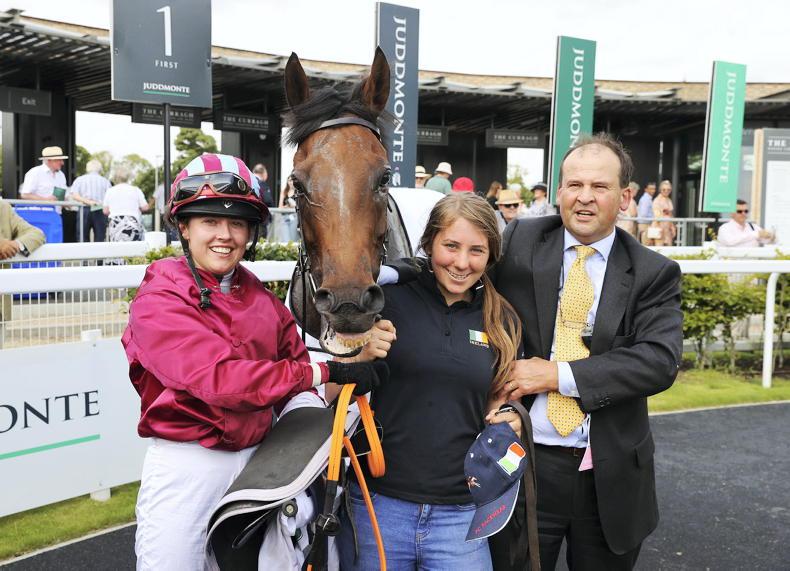 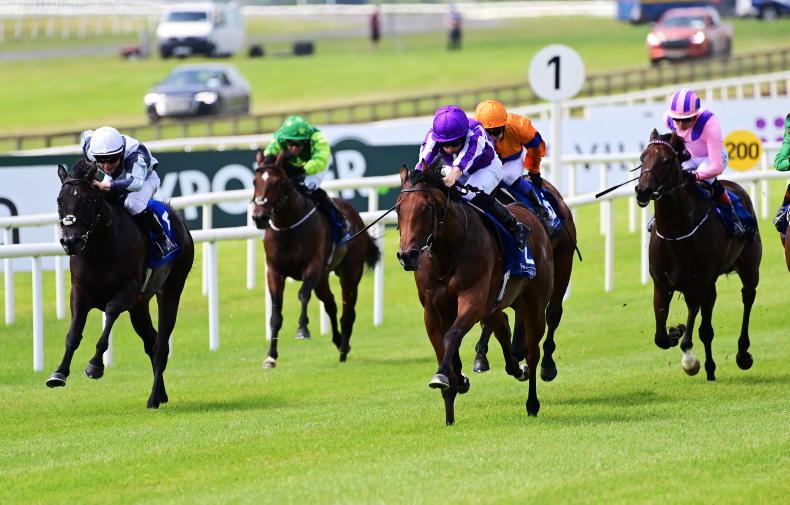 JOHNNY Murtagh endured a frustrating spell in the aftermath of Derby weekend but the trainer ended a three-week barren spell in great style as Ladies Church and Ben Coen upstaged some much better fancied rivals in the Group 2 Barberstown Castle Sapphire Stakes.

A very smart stakes-winning juvenile last season, the Mark Dobbin-owned filly failed to fire when a well-backed favourite for a Royal Ascot handicap last time. This race represented a significant rise in class for her but she was backed from 25/1 into 12/1.

Last year’s winner and favourite Mooneista arrived full of running as the last furlong loomed. Just in behind, Ladies Church was produced with a brilliantly timed, unyielding last furlong charge to edge the bobbing finish by a short head. There was a further gap of one and three-quarter lengths back to the English raider Equilateral.

“Ben gave her a peach of a ride,” reflected Murtagh. “She settled well today. When she relaxes early in her races, she has that turn of foot. It was a bit step-up in class for her. She’s a huge filly and was always going to be a better three-year-old and she’s learning how to sprint. We’ll step her up to Group 1s for the rest of the season and the Flying Five will be next.”

Easily one of the highlights of the entire weekend was the victory of Extensio in the Kildare Village Ladies Derby which made it a day to live long in the memory for trainer Pat O’Donnell and his daughter Sylvia. This career highlight saw his daughter partner her first winner on the track from around 20 rides.

A second to Harry’s Legacy at Leopardstown last month pointed to Extensio’s capacity to lift this prize and he was sent off a well-backed 6/1 chance. He was travelling strongly at the head of the main group as they closed in on the front running Dartington from the turn-in and he led a furlong from home before a half-length success over Pachmena.

“I’d have given up a Group 1 winner for my daughter to ride the winner of this race, we planned this two years ago,” exclaimed O’Donnell. “Both my children are in the industry, Patrick is in Hong Kong and I miss him a bit today. Sylvia rides out every morning for Ken Condon and that’s only her third ride this year. It’s a mammoth thing to do.

“I was fortunate to have a winner at Cheltenham in 1995 with Chance Coffey but I’m sorry to say to all those National Hunt aficionados that it pales into insignificance beside this.”

OAKS day concluded in fitting style as Jessica Harrington, Shane Foley and Zhang Yuesheng combined for another winner as Benitoite returned from 11 months off the track to take the TaxAssist Irish EBF Fillies Maiden over a mile.

The 3/1 joint-favourite, who was second in a maiden here last August on her only previous outing, came between horses to take charge late on and defeat Spring Feeling by three-quarters of a length.

“She has a beautiful pedigree so to win her maiden was very important. If we could win a listed race or get blacktype with her it would be great. She’s a gorgeous filly but she’s been a bit fragile,” declared the trainer.

The day began with a notable show of strength from Aidan O’Brien on the two-year-old front and Little Big Bear (2/5) was an especially impressive winner of the Jebel Ali Racecourse Anglesey Stakes.

Fresh from a Windsor Castle Stakes success at Royal Ascot, this son of No Nay Never revelled in the step up to an extended six furlongs.

Ryan Moore had Little Big Bear racing on the pace from the outset and waited until the furlong pole to ask his mount for more. When he did quicken up, Little Big Bear left his rivals toiling in vain and he reached the line just under five lengths ahead of the once-raced Yosemite Valley.

“It was lovely for him to step-up in trip that way and Ryan felt he ran through the line well,” observed O’Brien. “The plan beforehand was to come here and then go on to the Phoenix Stakes and I’d say that’s where he will go now.”

This Aidan O’Brien-trained son of Frankel was sent off at 10/11 to build on his eye-catching debut at Tipperary last month. He made plenty of the running for Ryan Moore and, when pushed along to quicken up inside the last quarter of a mile, he responded impressively. Despite needing only a hand ride, Hans Andersen quickly put daylight between himself and the remainder to win by one and three-quarter lengths from the newcomer Al Riffa.

“He should have no problem stepping into stakes company now and he could come back here for the Futurity,” remarked the trainer.

Quinn makes a successful raid
in the Scurry

An admirable 15-time winner and big sprint-handicap regular, the seven-year-old son of Choisir lined up off a fine fourth in the Wokingham at Royal Ascot as the 5/1 joint-favourite. After forcing the pace, My Wagyu looked to be in big trouble as a host of challengers ranged up with over a furlong to run. He could easily have faded at this point but he first dealt with the effort of No More Porter and then plumbed the depths to find more as the line loomed to hold the oncoming Big Gossey by a head.

“He’s a phenomenal horse and the syndicate have had him since he’s was a yearling (when he cost £26,000). He’s a remarkable horse and he always turns up,” reported the trainer’s son Sean. “The Wokingham fourth was a very strong piece of form and full credit to the horse - he kept finding. He’ll likely head on to the Stewards Cup at Goodwood now as he won the consolation race for it last year.”

The first nursery of the season went to Joseph O’Brien for the third year in succession as All Things Nice shrugged off top weight to justify 9/4 favouritism on just the third outing of her career.

The E S Racing-owned daughter of Sioux Nation was dropping down in trip to six furlongs for the DMG Media Nursery having previously won over just short of a mile at Bellewstown. The 85-rated filly, under Mikey Sheehy, made all the running and turned away a series of potentially menacing challengers over the last furlong and a half.

A game All Things Nice got to the line a neck ahead of Lasmuigh.“We will probably go into stakes company with her now and she’ll probably end up in the Goffs Million too. I thought she got a very good ride from Mikey,” declared O’Brien.