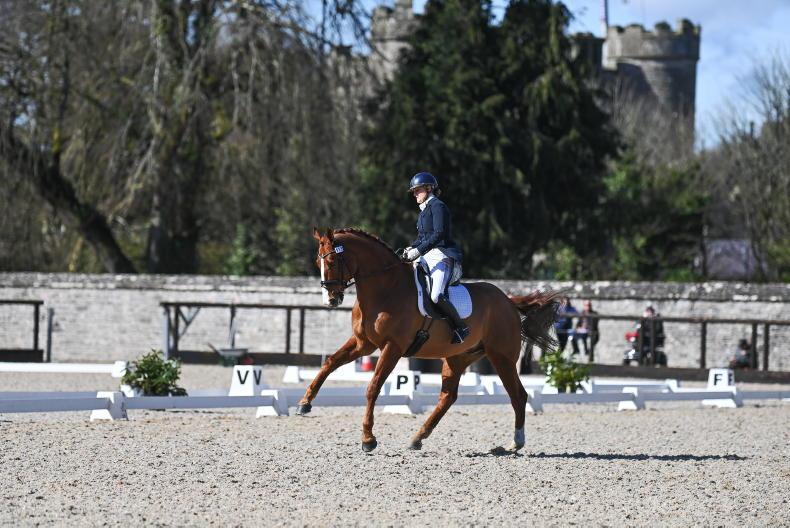 INCONGRUOUSLY, there was wall to wall sunshine for Dressage Ireland’s national winter finals at Castle Irvine, Necarne last weekend when most of the action at the Co Fermanagh estate took place in the iconic walled garden.

Staged in association with Fermanagh & Omagh District Council, the finals attracted good support at the lower grades, with 39 combinations competing in the Preliminary championship, but, not so at the higher levels where there were some notable absentees.

In the Big Tour, Josephine Delahoyde was left to compete on her own in Sunday’s Grand Prix Special with Lets Go 110 following the withdrawal of her sole rival, Kevin Acres. The latter won Saturday’s Grand Prix with Con McCarthy’s Dutch Warmblood gelding Ganesh (64.728), an 11-year-old by Jazz. The Marlton Stud rider and her 18-year-old Holsteiner gelding by Limbus completed on a combined percentage score of 128.441%.

Eight combinations contested day one of the Small Tour championship when the Prix St George was won by Kildare’s Belinda Breterton with her Dutch Warmblood gelding, Galaxy Moone (66.839). The combined scores of visiting judges Gwyneth Lewis (C) and Clive Halsall (M) had Laragh O’Grady second on her Irish Sport Horse gelding, Mullentine Emerald Wolfe Tone (65), although Lewis only had her in sixth.

In Sunday’s Intermediate I, former national champion O’Grady and her 11-year-old chesnut son of Jaguar Mail topped the scores of Suzanne Petty (C) and Pam Bushell (M) on 66.397 ahead of Breterton who fared better here on Deco (66.177), her 14-year-old black Dutch Warmblood gelding, as Galaxy Moone could only finish fifth (63.530).

When the two lots of scores were added together to decide the destination of the title, it was O’Grady and her Heather Allen-bred Mullentine Emerald Wolfe Tone (131.397) who were winners of the cash, sash and championship rug with Breterton claiming the reserve slot on Galaxy Moone (130.369).

In the Advanced Medium championship, it was Horse Sport Ireland’s youth dressage team manager Dunphy who claimed the honours with LEB Hugo (131.274), a Woodlander Rockstar nine-year-old, ahead of Dowley and Insticator B.S. (129.455).