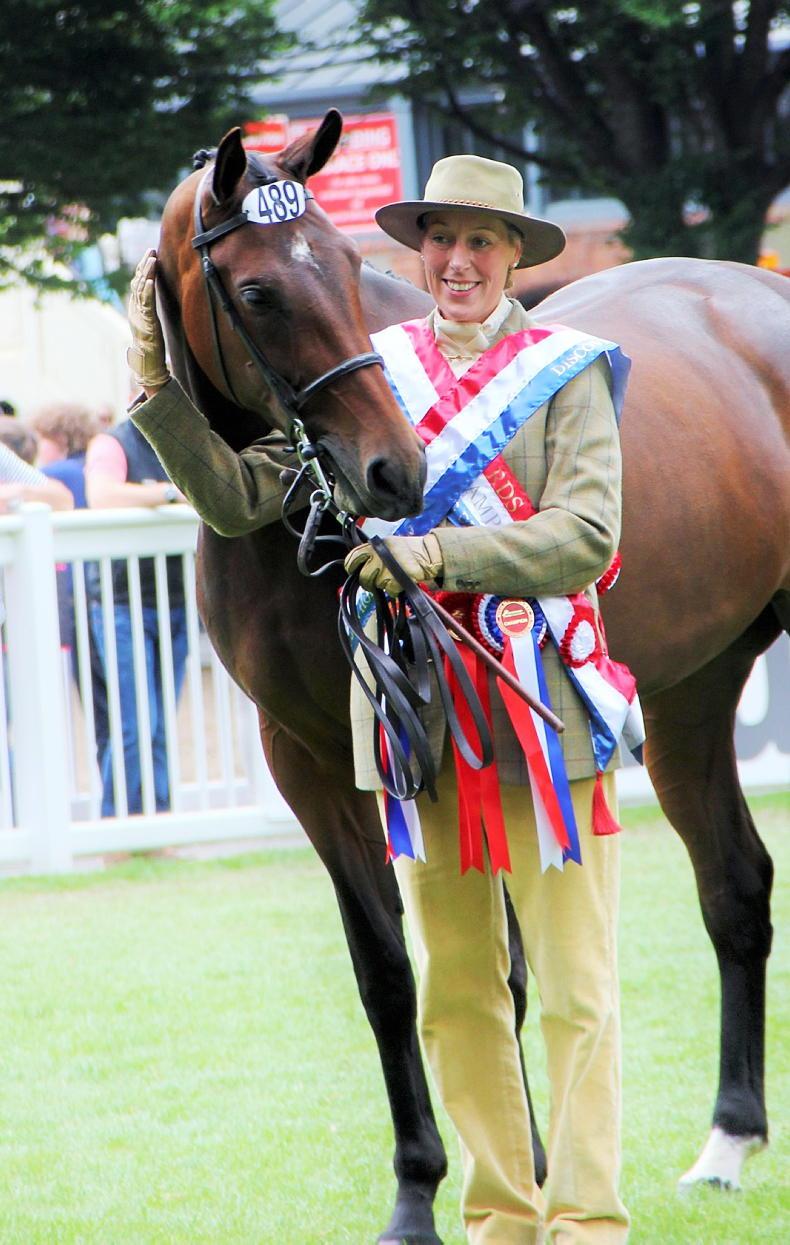 Ballykelly Notalot is on her way back to the RDS for next week's The Irish Field Breeders' Championships. Pictured with Rebecca Monahan when they swept the boards as Dublin young horse champion, Notalot as a three-year-old \ Susan Finnerty 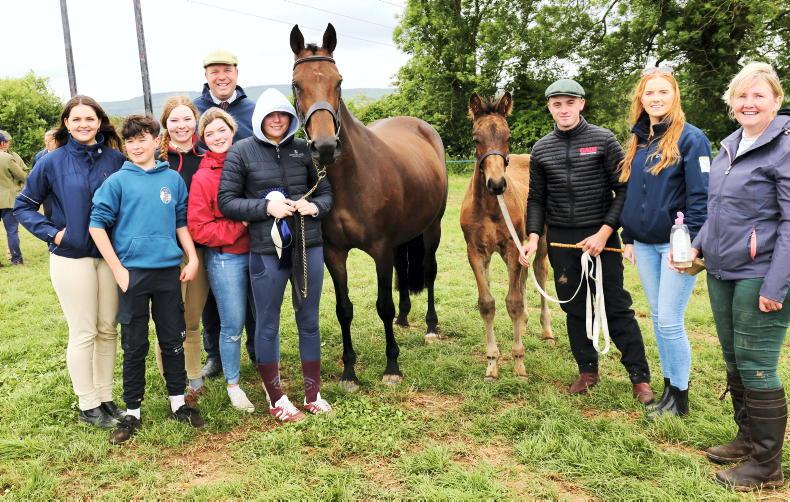 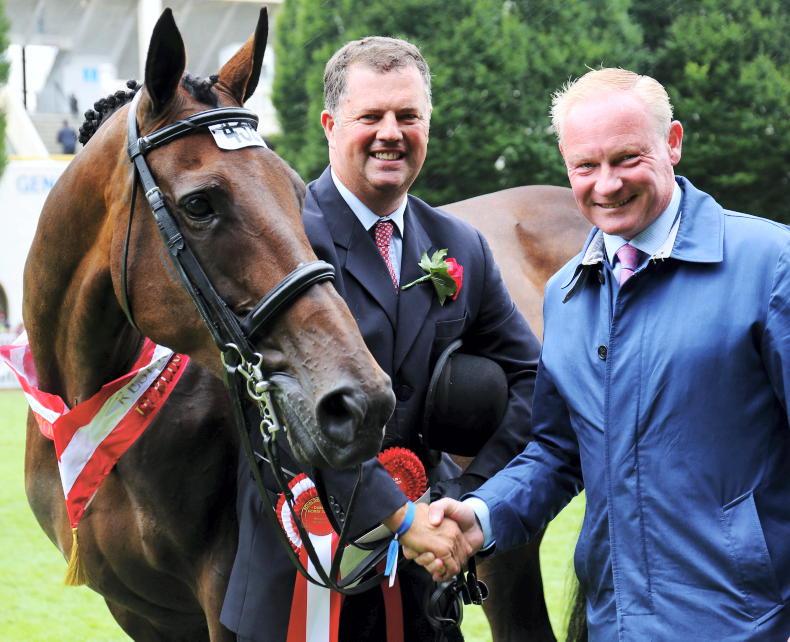 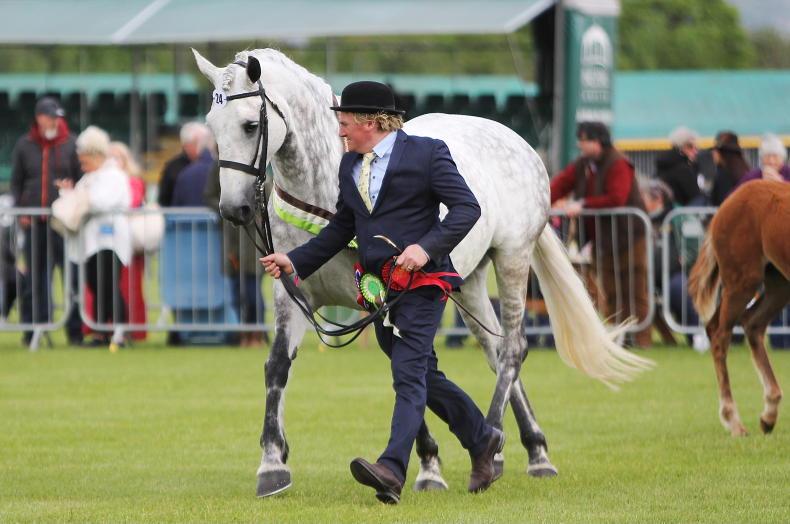 BALLYKELLY Notalot makes another Breeders’ Championship appearance for Wexford owners Margaret and Des Jeffares, after the Lancelot mare secured her place in the Dublin final. A prolific winner as a three-year-old for previous owner Rebecca Monahan, she won a slew of titles as a three-year-old in 2015, including the All Ireland final at Bannow & Rathangan and Laidlaw Cup young horse championship at Dublin.

Completing a Dublin-qualified double for Lancelot mares is Linda Wafer’s Hot To Touch. Linda’s husband Maurice showed his uncle Patrick’s winning mare Parkmore Evita in 2019 so there will be some friendly family rivalry in Ring 1 next Friday.

Bought by the Carnew couple for son Conor and daughter Katie to compete in young rider and Children on Horses classes, the pandemic sent her to the breeding paddock instead and now to the Breeders Championship final.

Hot To Touch goes to Dublin with a colt foal at foot by the Quidam de Revel grandson, Quality Time TN.

Armagh is a lucky hunting ground for the Rothwell family and this time they secured an early place with the Financial Reward mare Greenhall Push Button. No stranger to Dublin - the last time this granddaughter of the 1998 winning mare Greenhall Cailin Deas was in the RDS three years ago, she finished up as the champion lightweight, mare and reserve supreme hunter.

She returns to Dublin with her third foal, all by the Clinton son Dignified van’t Zorgvliet.

The second combination to qualify here is Danielle Cusack’s Hallowberry Destiny, the first of three former winning mares in this year’s line-up. 2018 was this Ramiro B - Cavalier Royale mare’s crowning moment in Ring 1 when she and her Clonaslee Captain Cristo colt MD Sandyhill Sir Charles were champions.

This year’s full-sister foal is also by the traditionally bred Clonaslee Captain Cristo, by Captain Clover.

The midlands qualifier saw two more gain their Dublin passes, including Martin and Mary Murphy’s Castlegate Sweet Emotion, a winner of the lightweight broodmare class on her most recent Dublin appearance in 2018. With their Fuerty Princess not returning in a bid to retain her Irish Draught champion tiara, the Mayo couple’s hopes are pinned on this Mermus R - Limmerick mare to carry on their red ribbon run.

Her filly foal is by the Heartbreaker son Hardrock Z.

It was a good day for Mermus R stock with Greenhall Catwalk making it two out of two for the Burggraaf son. The second of Derry Rothwell’s finalists this year, both her Cruising dam Millennium Cruise and grandam Greenhall Cailin Deas have won at the final.

Catwalk was third on her most recent Breeders Championship appearance in 2019 and her colt at foot is her fourth foal to date, all by Dignified van’t Zorgvliet.

Future Girl makes her Breeders Championship debut for Crossmolina owner Anthony Gill. By the Oldenburger O.B.O.S Quality, sire of several five-star event horses, including Luckaun Quality, she is out of the thoroughbred mare Flynns Cliché, by the St Leger and Gold Cup winner Classic Cliché. Her second dam is by the good National Hunt sire Mandalus.

Her colt foal is by the Holsteiner stallion Colandro, sire of Shane Sweetnam’s Buckle Up.

The second pair to qualify at Athlone is Yvonne Pearson’s Kief Queen B, by the thoroughbred Munther and out of Madam Noir, by Kings Master, herself a frequent winner of Dublin ribbons.

Another lockdown family project story emerged from the third qualifier where Joan Ruttle’s Harlequin Charm and her colt foal, by the Chacco-Blue son Conticco, booked their place.

By Harlequin du Carel out of a Cavalier Royale dam, the mare was bought by Joan and her husband Liam to produce potential young horses for their children: Carol and Nathan. Both have already won at Dublin in working hunter and leadrein classes but this will be their parents first venture into the Breeders Championship.

Another first-time finalist is Mayo’s Liz Murphy whose RockNRoll goes to the RDS with a colt foal, another by Quality Time.

By Aga Khan hero Pacino, sire of Bertram Allen’s WEG horse Pacino Amiro, RockNRoll is out of a Nigrasine-Aristocracy mare and she is a half-sister to Rockshore, winner of the Balmoral four-year-old event horse class.

Parkmore Evita became Patrick Wafer’s second winning mare in this championship in 2019, having already won in 1990 with Parkmore Jewel and Parkmore Chance, the only purebred Irish Draught combination to ever do so.

Fresh from her big win in the Banner broodmare championship at Clarecastle, this Ghareeb mare is one of a handful to have completed a Breeders Championship winning mare title and Coote Cup crown, all within 24 hours at Dublin.

The Numero Uno son Tyson is again the sire of her latest foal, a full-sister to the 2019 winning foal Knockout, entered in the three-year-old gelding class.

Another Breeders Championship/Coote Cup double titleholder, another by Ghareeb and another with a Tyson filly foal at foot. That’s John Burchill’s 2016 dual champion Slatequarry Sasha, who viewers may have caught a glimpse of when watching RTE’s Horse Country, which features the West Cork family.

Like several of the mare and foal finalists, they will also line out in the following morning’s Coote Cup classes.

The two distinctive greys in this year’s final both qualified at Kilrush. Diamonds For Douglas goes to Dublin with her own performance C.V, having jumped up to 1.50m Grand Prix level with Joan Greene. By Ard VDL Douglas, Diamonds For Douglas is out of a full-sister to Richmont Park’s sire, Coevers Diamond Boy.

Her Air Jordan Z colt sold well at the Bolesworth foal auction in 2019 and this year, she has a colt foal at foot by the Mr Blue-sired Zirocco Blue VDL.

Liam Lynskey also appears on Horse Country and he lines out in Ring 1 with DS Bounce With Me Baby. A pure-bred Draught - entered too for Thursday’s Draught mare class - she is a daughter of Liam’s late stallion Moylough Bouncer out of the Mount Diamond Flag dam Mount Diamond Princess.

The traditionally bred Cruising-Clover Hill son Cruising For Chics, another of Derryronane Stud’s resident stallions, is the sire of her filly foal at foot.

Brookfield Miss Lux is no stranger to Ring 1 having been here before as the winning foal when her Cavalier Royale dam Kildysart Royale won the first part of a back-to-back double for Kieran O’Gorman in 2009. She duly followed up the next year, this time with a full-brother to Miss Lux at foot and became one of four mares (Assagart My Only Hope, Golden Sunset and Springpark Lady Nell being the other three) to win on two or more occasions.

The Lux Z mare returns with a filly foal at foot by O’Gorman’s own thoroughbred stallion Munther.

From a frequent finalist to a first-timer. Although Dermot O’Brien and Stonepark Imp will make their Breeders Championship debut, the Limerick owner is well remembered for exhibiting the Irish Draught twin foals, ‘Thelma’ and ‘Louise’ at Dublin, back in 2006.

Stonepark Imp is by the Imperius son Master Imp, the leading sire in the 2014 WBFSH, British Eventing and USEF rankings, the only eventing sire to do so. Her colt foal at foot is by the O.B.O.S Quality son Lagans OBOS Quality.

Snapshot of the hopefuls

That’s a snapshot of this year’s hopefuls. Who will win? We’ll know next Friday around 12.35p.m as the show jumping section starts first at 11.05am, followed by the eventing half at 11.50a.m.

With the Laidlaw young horse championship beforehand and the thoroughbred stallions on parade immediately afterwards, seats and elbow room will be at a premium for the ringside supporters. Get there early.