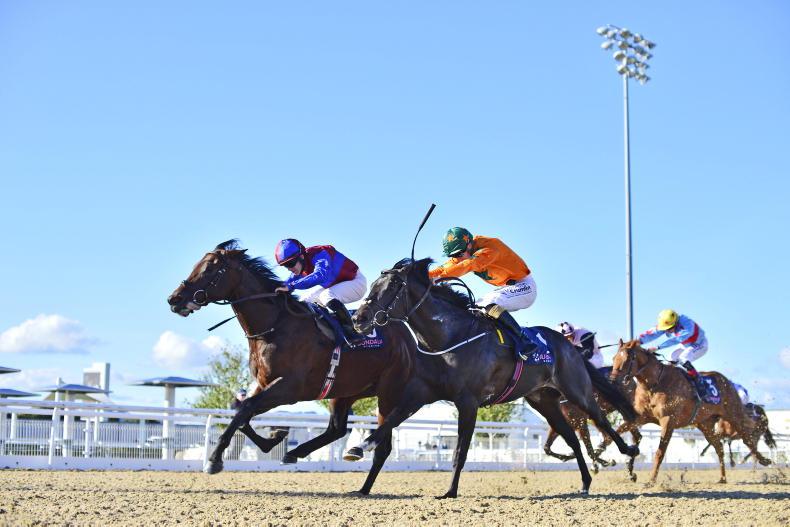 DUNDALK hosted its first Friday evening meeting this autumn with Aidan O’Brien and Wayne Lordan teaming up to land the two most valuable races for the Coolmore partners, with the odds-on pair Congo River and Gulliver’s Travels.

Congo River, just denied at Navan last month, went one better in the opening Irish Stallion Farms EBF Race although the 4/7 chance needed to be driven right out inside the final furlong to beat Dontspoilasale by a neck.

Stable representative Chris Armstrong said: “He was unlucky the last day in Navan and he’s run in a couple of decent maidens. Wayne gave him a lovely ride and kept it simple.

“He’s our only horse by Mendelssohn and it’s nice to get a winner for the sire. Five is his trip, he likes quick ground and he’ll come back here for the Listed Legacy Stakes at the end of the month.”

Gulliver’s Travels completed the double in the 12-furlong conditions race. The four-runner contest was quite a tactical affair with the well-backed 8/11 shot making most of the running.

Lordan’s mount looked in trouble when headed by Longbourn inside the final quarter mile but rallied strongly in the closing stages to beat that rival by two lengths.

“Wayne knows him well as he won on him in Cork. He’s coming along with every run and he’s a work in progress. He’s a horse that stays extremely well,” said Armstrong.

“We have him entered in the premier handicap at Listowel, whether he gets in or not, and we’ll see how he comes out of the race.

“There are plenty of options for him including a mile-and-a-half handicap back here or you could try him up in group company in something like the two-mile Loughbrown Stakes (Curragh, October 23rd).”

DYLAN Browne McMonagle also partnered a double when taking both divisions of the Irishinjuredjockeys.com Handicap aboard Darkdeserthighway and Coviglia.

Darkdeserthighway landed something of a touch in division one, having been 22/1 overnight and backed on track from 9/1 into 7/2 favourite. The Michael O’Callaghan-trained filly challenged on the outer in the straight and got well on top inside the final furlong to beat James Henry by two and a half lengths.

“She had a good run the last day in Roscommon over seven on soft ground. Back up to a mile today and back on a better surface it worked out lovely,” said the winning rider.

“She travelled into the straight really well and when I went for her she picked up well and hit the line well.”

Browne McMonagle looks certain to retain his champion apprentice title and moved onto the 34-winner mark for the campaign when also producing Coviglia from off the pace in division two, finishing strongly to get the better of The Bog Bank by a length and a half.

“He’s a great horse, he’s consistent and runs his race all the time,” said Donegal-based Charlie Moore, who trains the 11/2 shot for Kyle Browne McGuigan.

“He loves it here and won at the track back in March. He comes out of the stalls slow, it’s a fault he has, but he got there in the end.”

Billy Lee edged one ahead of Colin Keane (77-76) in the flat jockeys’ championship after Arriniti readily landed odds of 1/2 in the six-furlong Irish Stallion Farms EBF Median Auction Maiden.

Trained by Paddy Twomey for Team Valor, the Karakontie juvenile quickened up nicely in the centre of the track, well over a furlong out, to beat Song For Whoever by two and three-quarter lengths.

“The draw wasn’t too kind but she bounced lovely and floated around,” said Lee before adding, “She loved the surface and I’d imagine she’ll maybe be coming back here for one of the listed races, whether it’s over five or seven.”

Hodd’s Girl (8/1) made it two wins from three starts since joining Ado McGuinness this summer in the View Restaurant At Dundalk Stadium Handicap. The grey mare quickened up between horses a furlong out under Adam Caffrey to beat Sister Lola by a length and a quarter.

“He gave her a great ride because we were drawn wide enough. The horse was there to take him where he wanted to go which was a big help,” said McGuinness, who trains her for the Rocky Horror Partnership.

“She’s improved and we’ll probably have a shot at a bigger handicap here later on, either over six or seven. She loves the surface.”

Draco Pulchrac (6/1) got off the mark at the 14th attempt in the Find Us On Twitter Handicap. The Newtown Anner-owned filly, third over a similar trip at Navan last time, travelled well to lead over a furlong out and stayed on strongly for Ben Coen to beat Wojood by two and a half lengths.

“She was due that. She’s been knocking on the door but things just haven’t gone her way. It’s great to get a bracket into her for the man that owns her,” said trainer Tony Martin.

JOUPE, 16/1 in the morning and sent off the 100/30 favourite, was another good result for punters in the William Hill Apprentice Handicap.

Owned and trained in Donard, Co Wicklow by Peter Lawlor, the Lope De Vega mare was patiently ridden by Daniel King and came with a sustained challenge on the outer before getting up on the line to pip Cozone by a nose.

“It was her first time over this trip but she’s very genuine and I knew she’d stay. We’ll come back here in a fortnight and I might even step her up again,” said Lawlor. “Dan (King) gave her a fantastic ride. He settled her out the back and we ride her the same way all the time, come with a run around the outside.”