“We will look at six and seven-furlong races on the turf and long term I am targeting the Sovereign Path in Leopardstown on Champions Weekend,” declared Johnny Levins on Prisoner’s Dilemma 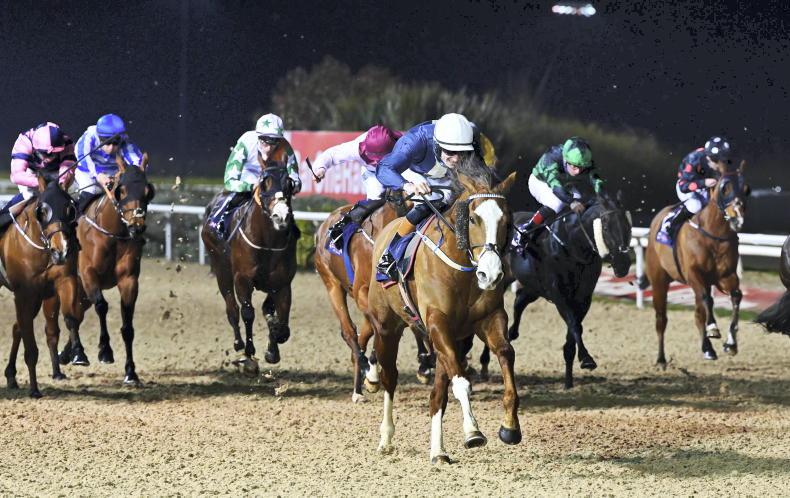 AN impressive season for Prisoner’s Dilemma ended on a high as he produced the performance of the night on the final evening of the winter season in the six-furlong handicap.

Already a dual winner on the polytrack in recent months, the Johnny Levins-trained six-year-old was trying this trip for just the second time in his career and he could easily be an emerging force at sprint distances.

After taking his time off the pace, Donagh O’Connor produced his mount to lead just over a furlong from home and the 11/2 chance quickly opened up a commanding advantage to reach the line two and a quarter lengths ahead of Inflection Point.

“We will look at six- and seven-furlong races on the turf and long term I am targeting the Sovereign Path in Leopardstown on Champions Weekend,” declared Levins.

“They went very fast up front and Donagh rode with a good clock in his head and picked up the pieces.”

A good winter for Lee Smyth ended with a bang as the trainer produced Spirituoso to strike at 66/1 in the 45-65 rated handicap over an extended 10 furlongs.

A 2,000gns purchase at the Tattersalls July Sale, this four-year-old had largely struggled for form since then but she returned in a great order from two months off and came with a strong late charge under Joe Doyle to pick off Dr Patrick in the final yards.

The daughter of Charm Spirit is owned by the trainer’s stalwart patron David Adam.

The evening racing began with a second polytrack success for the reliable Samrogue (4/1) in the 45-65 rated five-furlong handicap. Ross O’Sullivan’s charge, who has finished no worse than fourth in six outings here since late October, was given a fine ride by Conor Hoban who produced her from off the pace to edge out the favourite Collective Power.

The winner is owned by Yvonne Lavin.

“We forced her along a little bit early on over a couple of races and but Conor said she doesn’t have to be forced along. He followed and switched out and it worked perfectly today,” declared O’Sullivan.

“Conor said she’ll go on grass too. She hasn’t had a hard winter and when she last ran in January we said we would wait for this as it’s the final day of the winter series and the prize money is very good.”

HE may have been a little frustrating to follow at one point but Dances With Stars, whose trainer Joseph O’Brien was crowned top winter series trainer for the sixth year in succession, has really got it together and made it three wins from seven outings in recent months in the mile-and-a-half handicap.

Mikey Sheehy was again on board the Charles Fipke-owned five-year-old who was sent off the 6/4 favourite, and the pair struck the front to carry the day by half a length from the always prominent Effernock Fizz.

“He’s a really likeable horse. I was waiting for the gaps to come in the straight and when they came, he was good and game for me,” stated Sheehy.

Eskimo Comet brought the curtain down on a splendid winter campaign for Luke Comer as he returned from almost five months off to land the Irish Stallion EBF Median Auction Maiden.

A 10th winter season winner for his trainer-owner-breeder, this son of Red Jazz was a promising third on his debut here in early November and he built on that with a narrow success.

Sean Davis was on board the 9/2 winner who raced on the pace throughout and kept pulling out that little bit more in the closing stages to get home by a short head from National Generaux.

The winning rider picked up a two-day whip ban.

GAVIN Cromwell could have a progressive three-year-old on his hands in Singsong Lady who struck under Conor Maxwell in the three-year-old mile handicap. This daughter of Cotai Glory finished down the field on her most recent outing a month ago but produced a display much more in keeping with her previous efforts here.

The Nora Byrne-owned filly found herself a bit short of room when an errant Hey Kameir went left early in the straight but she shrugged off this interference. It wasn’t long before Conor Maxwell had her challenging for the lead and the rider only needed to push her out in the closing stages to record a neck success over Aristovic.

“She’s a smashing, big filly with loads of scope. She’ll run on the turf and will want nice ground,” reported Cromwell.

Skontonovski has been a revelation since being picked up for 6,500gns at the Tattersalls July Sale and he bagged his fifth success since then in the mile handicap. The Adrian McGuinness inmate was some 26lb higher than when recording his first Irish success in September but this mattered little.

Colin Keane got him into a narrow lead and the pair lasted home in a bunch finish to defeat Super Over by a nose with the favourite Elzaam Blue a further head back. The winner is owned by Mark Devlin.

Maestro Stick, on his fourth outing for Keith Clarke, registered the first success of his career in the 45-65 rated seven-furlong handicap. A five-year-old son of Frankel, this Phoenix Bloodstock-owned gelding won quite comfortably for Gavin Ryan.

He headed Mullacash Buzz with a furlong to run and stayed on strongly to finish with two and a quarter lengths to spare. This 8/1 chance could progress further over the coming weeks.