Title: EVENTING: Duffy bounces back from injury to win 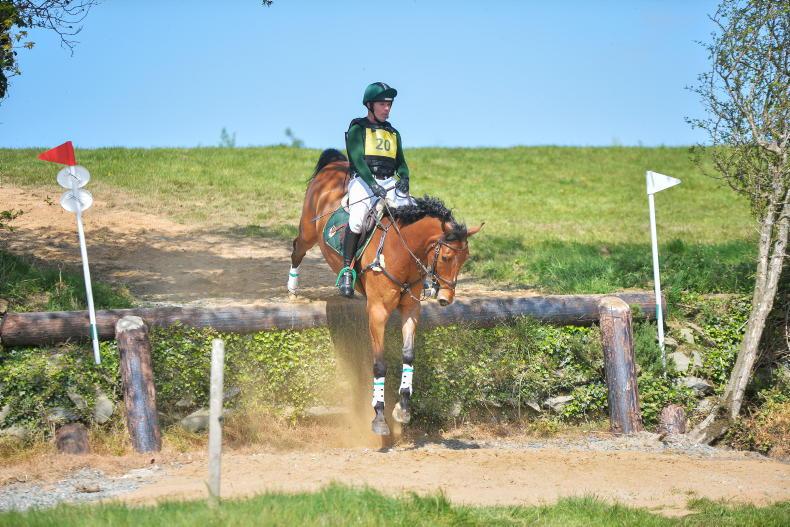 NOW an established venue on the eventing calendar, Frankfort hosted the first of three scheduled fixtures last Sunday. Organiser Will Kearney and his team make efforts to upgrade the facilities on every running, and notable among the most recent improvements was the much-appreciated enlargement of the show jumping arenas, and the softer turning lines across the country.

The feedback was positive from all quarters, most notably from senior rider Fraser Duffy, who having returned to competition following a serious neck injury, won one of the feature classes. Speaking afterwards Duffy commented: “The cross-country keeps getting better. They are becoming wiser on how to use the land they have, and my horses always jump well around here.”

Co Wicklow’s Heidi Hamilton turned her seasonal eventing debut into a winning one, when she comfortably landed the EI 110 (O) from the front. Teaming up with Paula Cullen’s home-bred mare Paulank Kirikee, Hamilton nailed the first phase with the only sub-30 score, progressing to win by over six marks.

“For her first run of the year I’m very happy,” declared the rider. “She only started eventing 17 months ago, and over the winter we’ve been doing lots of show jumping at Barnadown.” Out of a sister to Cullen’s famed Badminton winner Paulank Brockagh, and by the advanced eventing stallion Jumbo (BSHR), the eight-year-old Kirikee has a full two full siblings competing in America.

Chasing throughout and the sole runner of eight starters to complete within the time, James O’Haire filled second with Liberty Belle, from Katherine Duffy, and Thaddias Brown.

Fraser Duffy’s comeback victory came in a far more competitive EI 110, in which 21 went to post, and nine picked up penalties in the country. It was certainly a rewarding one for the Kilkenny-based rider, who having broken his neck in four places last autumn, and confined to a ‘halo’ for three months, had only recently returned to competition.

In fact, the past few months were spent in Florida, where charged with the selling of a number of Fernhill horses, he was able to recuperate in the sun.

“I was very fortunate in many ways and the neck felt great today,” he said. Duffy’s winning partner was Carol Gee and Clare Corballis’s highly regarded six-year-old Fernhill Muse. A son of Mermus R, and bred by Justin Burke, the gelding had three runs last autumn and was never placed lower than third. “The team at home in Kilkenny did a brilliant job in keeping him (and the others) going while I was away. I was thrilled that he came back so strong after the winter as I wasn’t sure what to expect,” said Duffy.

In second place on the flat, the winners did not have things quite their own way, and were promoted only when leaders Meabh Bolger and MBF Back To Back opted to go for a quiet (and subsequently slower) spin in the country. Bolger’s drop from contention also benefitted Sam Watson who slotted into second with the consistent Grantstown Charisma from third-placed James O’Haire (Jamaica Rose).