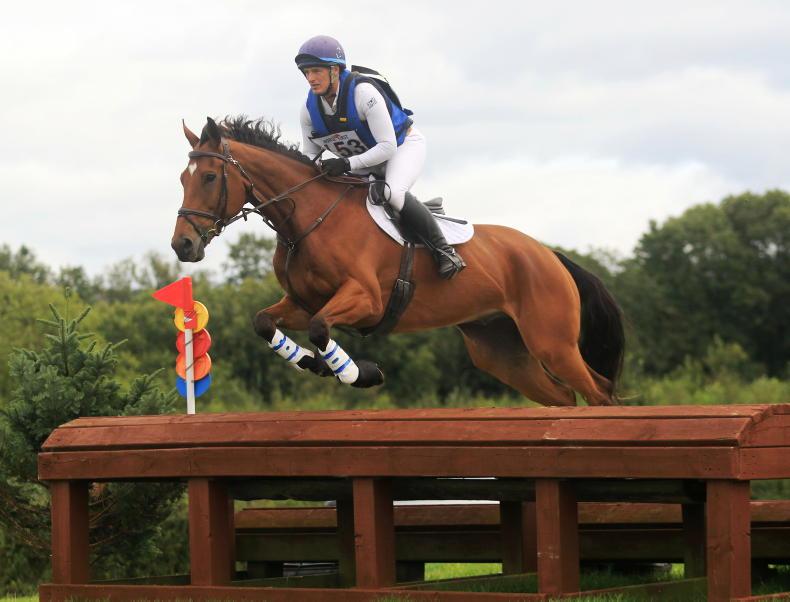 THE final one-day event in the Northern Region of Eventing Ireland for 2022 was held last Saturday at Alan and Muriel Campbell’s Dirraw Farm Equestrian on their organic farm outside Finvoy, where one can never fail but to be impressed by the pristine condition of the Co Antrim venue.

The fixture continues to be supported by local agricultural machinery distributors Rea’s of Finvoy, who had some of their stock in place as dressings on the Adam Stevenson-designed cross-country tracks where a new start position had given him scope for change.

Having welcomed underage European medal winners Tom Rowlatt McCormick (Junior) and Ben Connors (Pony) to the event, commentator Raymond Bready paid tribute to the late Queen Elizabeth II. Mike Alcorn then delivered a reading of the ‘Ode to the Horse’ before a two-minute silence was observed.

Tullymurry’s David O’Connor was the rider in form, winning two of the registered classes and one of the day’s three training competitions.

He struck first in the EI110 where he led throughout on Amy Salmon’s Irish Sport Horse gelding Las De Coeur, although adding 2.8 cross-country time penalties to the winning dressage score (26.3) he was awarded by Lucinda Webb Graham.

This was a first success for Las Da Coeur who is by the thoroughbred stallion Clerkenwell and was bred by Rachel Ferres out of her Zaffaran mare CCH Allure (CIC3*). “I’m delighted that this horse jumped a double clear to win for Amy who has worked hard with us this season,” said O’Connor. “I think he has the ability to go up the levels so is an exciting horse for the future.”

Two others left all the poles intact on the Aaron McCusker-designed show jumping track, Darragh Hanlon on Omaybe (having her first start at this level) and Jim Newsam on MMG Candy du Carel. Disappointingly, both retired on the cross-country course where Orla McGlynn and Red Raclette were eliminated when parting company at the 18th of the 19 fences, the Birch double.

With two fences down show jumping and a small number of time penalties between both jumping phases, Casey Webb finished some way adrift in second on the thoroughbred gelding Hiya Sonny (42.3). Tara Dixon was also a long way further back in third with Smart One (60.7) having notched up 17.2 time penalties on the final leg.

O’Connor brought up his double in the EI90 where there were just six starters. Here, Webb Graham’s leader after dressage on 28 penalties was Lucca Stubington with the thoroughbred gelding Kessler.

However, they left two poles on the floor and dropped to third as O’Connor completed on his flatwork mark to win with Tullymurry Vegas (30.5). Laoise O’Farrell split the pair with Miss Mojito whose completion score of 33.4 included 2.4 cross-country time penalties.

O’Connor’s traditionally bred Tullymurry Vegas, who was having his third start, is a four-year-old grey by the Irish Draught stallion King Of Mourne. He was bred in Co Down by Samuel Brown out of the unraced Zagreb mare Sioux City whose family, in its further removes, features blacktype winners such as Bachelor’s Hall and Aquilifer.

“Vegas was only backed in the spring so has taken to it all very well,” commented O’Connor. “He is naturally a careful horse, which makes riding him easier, and he has such a good brain for a four-year-old.

“Many thanks to the Campbell family for holding such a great event. There was so much grass cover the ground conditions were perfect. There was a great variety of cross-country fences making that phase challenging enough so it wasn’t a dressage competition.

“Elaine (David’s wife) and I have loved this season’s eventing and we hope that, even with the increase in the cost of living, our sport continues to recover after Covid and encourage more new members to join. The new 80/90 training classes are a perfect gateway for this to happen.”

It wouldn’t seem to be a Northern Region event without a win for Steven Smith who finished first and second in the three-runner EI110 (Open) with Terry Johnston’s 14-year-old Porsch gelding Hi Happy Harry (22.3), who completed on his winning dressage score, and Newferry Jagermeister (24.4) who was a second over the time in the show jumping ring.