Title: FEATURE - Lucy Thompson: "The atmosphere in Pratoni was magical" 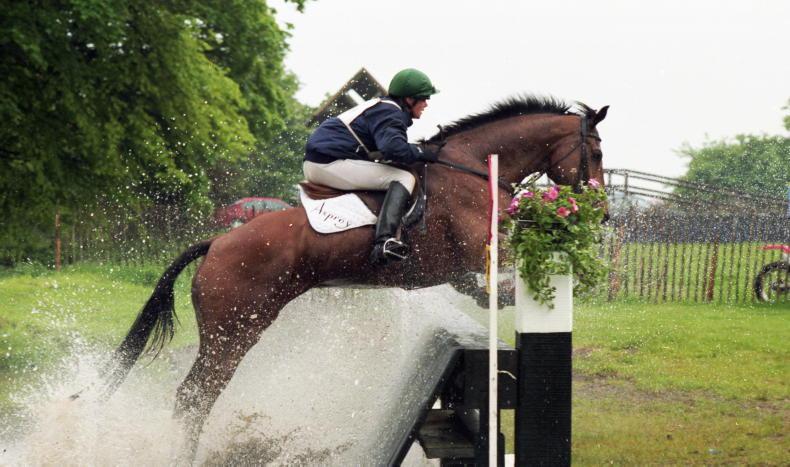 Lucy Thompson, winner of the gold medal in the1995 European open championships in Pratoni, pictured in action at Punchestown in 1997 when she won the CCI**N on Gold Dust III\ Tony Parkes 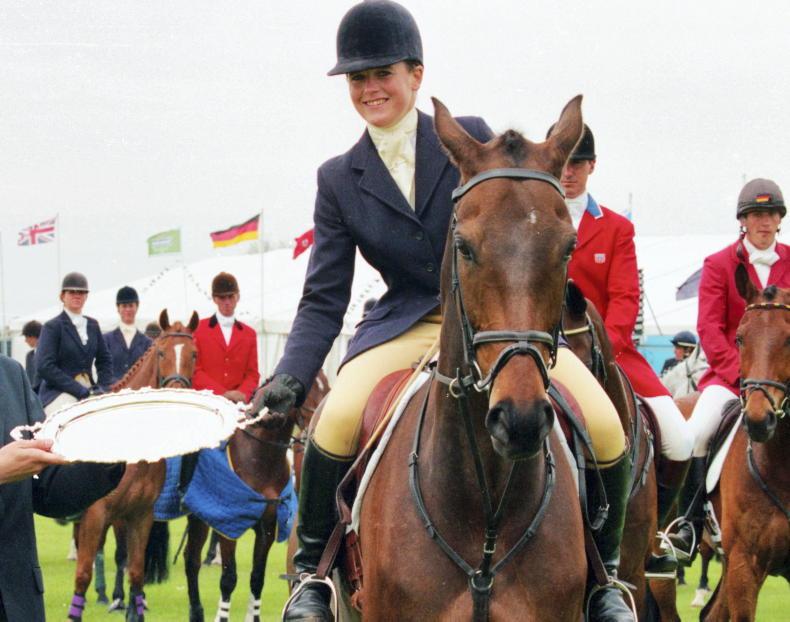 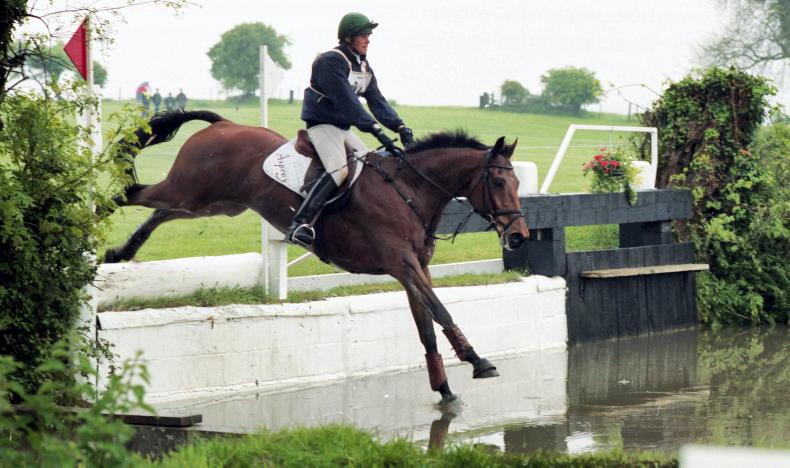 NEXT week’s World Eventing Championships are taking place at the wonderful Italian venue of Pratoni del Vivaro, south-east of Rome, where, in 1995, Lucy Thompson won individual gold for Ireland at the European open championships, leading the squad to team bronze.

The selectors and chef d’equipe, the late Peter Young, had a dramatic build-up to the championships as the late Captain David Foster (who had been on the Irish gold medal-winning team at Luhmühlen in 1979) had broken his hip, while Commdt Gerry Flynn (then Captain) had been forced to withdraw The Golden Duke.

Then, to add to the drama, Sue Shortt, who had only been drafted on to the squad two weeks earlier, found herself on the sidelines in Italy as her intended mount, Menena, was withdrawn at the first horse inspection.

This left a team of Thompson and the British-bred mare Welton Romance, Eric Smiley and Enterprise, Mark Barry and Vagabond Collonges and Virginia McGrath with The Yellow Earl. Alfred Buller made his international debut as an individual at these championships with the thoroughbred gelding Sir Knight.

Born, reared and educated in England, Thompson had only declared for Ireland at the start of the year. “I grew up in the South of England, my late father Chris Bywater being a GP in Lingfield which is famed for its racecourse. I was mad on horses from the get-go. I rode in my maiden name Lucy Bywater until my marriage in 1984 to Karl Thompson from Newport, Co Mayo.

“I had a very good thoroughbred jumping pony (Katie) who was very tricky and taught me about mares. We had good successes at J.A. Level. All my Junior and Young Rider eventing results were on The Countryman (an Irish-bred three-parts thoroughbred by Bliss) who was my first horse. He was given to me as an unbroken four-year-old on the occasion of my 13th birthday by my maternal Irish granny, Esther Kiely from Dublin.

“The decision to ride for Ireland in 1995 was not made lightly. I was sponsored from the age of 18 by Asprey, the jewellers in Bond Street, London, without whose support I would have followed my planned career of Fine Art and Design.

“Mrs Asprey, who attended every major event until her death at 93, became like a grandmother to me. She was central to the decision as her father had played polo for Ireland. She bought Welton Romance in her 90s as she felt there was still much more fun to be had. Pratoni was the highlight of a wonderful 25 years of support and sponsorship,” Lucy told The Irish Field.

While the competition (not the medals) was open to teams and individuals from countries outside Europe, their representatives never got to the front at any stage. Following the first day’s dressage, Britain’s Mary King led on King William (36 penalties) ahead of the USA’s David O’Connor with the Irish-bred Custom Made (42), an 1985 gelding by Bassompierre. At the end of play on day two, the unbelievable had happened with Ireland’s Thompson topping the leaderboard on Welton Romance (35.8), pushing King down into second.

As this writer was enjoying her holiday at the championships, I refer to the report written by Grania Willis, then editor of the Irish Horse World section of The Irish Field and equestrian correspondent with The Irish Times. Thompson’s test was so impressive wrote Willis that “spectators broke into applause even before she made her final salute.”

The speed and endurance phase over hilly terrain was tough with former Olympian Bill Buller, Alfred’s late father, describing the 27-fence cross-country track as the strongest he had ever walked. Sadly, the team’s pathfinder, Mark Barry, didn’t get to find out how Vagabond Collongnes would cope with the cross-country course as, while checking his watch on the figure of eight steeplechase track, he jumped the second fence a second time and was eliminated. Another rider did the same later in the day.

Virginia McGrath, who was next out for Ireland on the speed and endurance phase, came home clear but with time penalties with The Yellow Earl before Thompson and Welton Romance were clear in the day’s fastest time to remain on their dressage score overnight.

Eric Smiley and Enterprise also jumped around clear but failed to beat the clock by a second. These results left Ireland second overnight behind Great Britain. Our individual Alfred Buller parted company with Sir Knight at the 21st of the 27 fences but, once reunited, as one then could, they went on to complete the phase.

The Irish drama continued in the final show jumping phase. McGrath and The Yellow Earl lowered three fences while Smiley had one down, finishing seventh individually. Thompson had a fence in hand when going in last but used up that advantage when Welton Romance “went straight through the planks”.

However, she kept her composure to leave the rest of the fences intact, inside the time, setting off wild celebrations around the ring. Placing second individually, Marie Christine Duroy helped the French claim team silver with Ireland having to narrowly settle for bronze.

Even though we supporters found ourselves in the most unusual position of preparing to hail an Irish champion, we had our flag at the ready in the stands, waiting for the tricolour to be raised over the arena and for Amhrán na bhFiann to be played over the tannoy. The arena party got the flag right but the drama continued to the end with God Save The Queen first ringing out to boos from the Irish before the recording was hastily changed! “The atmosphere in Pratoni was magical,” reminisced Thompson. “Everyone involved in Team Ireland added 100% to the whole trip. Jimmy Larkin transported the horses in the Bullers’ lorry and put up with me endlessly reciting every move of my dressage test while Alfred took it one step further and ran the test on foot in the practice arena.

“John Watson was a brilliant assistant chef d’equipe, protecting me from a rather horrified British powers-that-be and press who suddenly realised there was a possibility I might win for Ireland. Then there were the fantastic grooms who didn’t let any tensions get in the way of the craic and the squad who always watched each others’ backs. I was especially thankful to Sue Shortt who organised Andrew Nicholson to brief me out of the 10-minute box as the cross-country time was so tight.

“As for the supporters, what can I say? There is no support like that of an Irish crowd. That embarrassing mistake of playing the British anthem at the prize-giving was quickly rectified but nearly caused the Irish section of the grandstand to collapse!

“If asked to compare my years representing Great Britain and Ireland I would have to say I enjoyed both and have some wonderful memories. But they are not comparable. Ireland breathes horses. It’s not only a sport, it’s a way of life, steeped in history; generations of knowledge and breeding, both horse and human. This shared love of the horse makes Ireland unique and very special.”

Since retiring from the saddle, Thompson has dabbled in pinhooking National Hunt horses and has done a lot of coaching of horses and riders for eventing, with a special emphasis on the young.

Sadly, ill-health in recent years has meant Thompson has had to cut back on her commitments, but she still retains a huge interest in eventing and will be closely following the action at Pratoni next week.