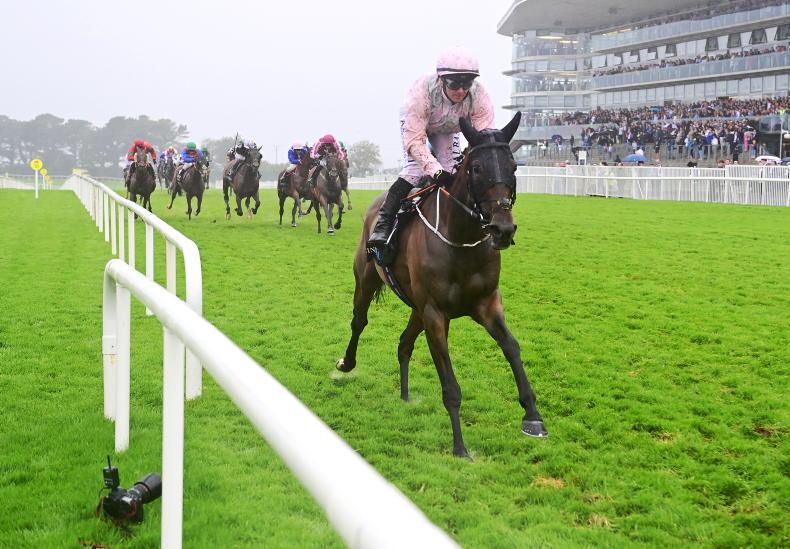 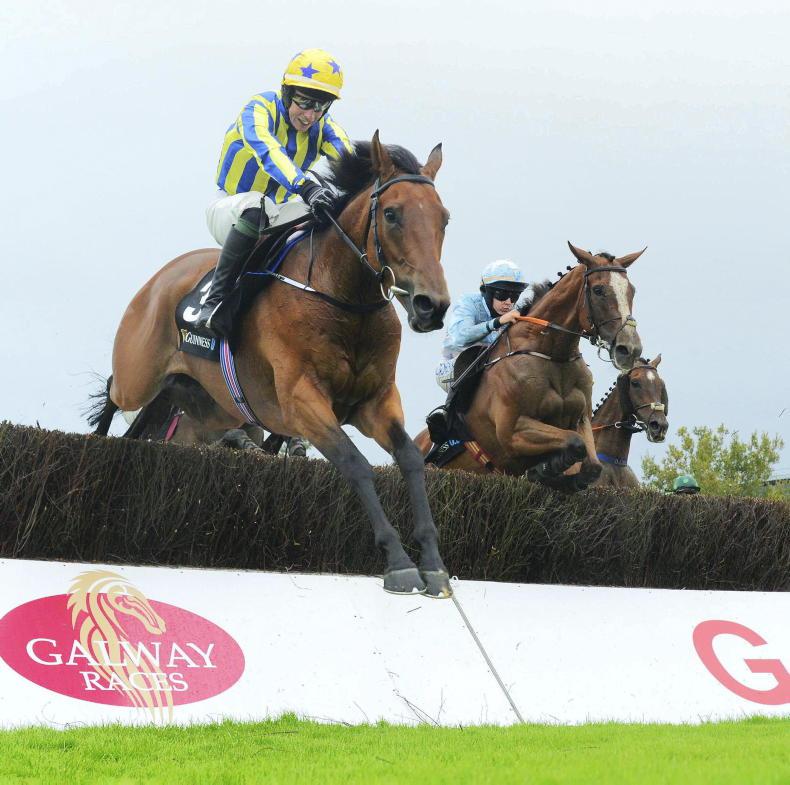 JOE Murphy annexed yet another big prize at his beloved Galway as Sionnach Eile transitioned seamlessly from the comparatively humble surrounds of a Ballinrobe handicap to claim the €110,000 Guinness Handicap over a mile and a half last Friday evening.

A half-brother to the Murphy-trained Swamp Fox, who won the amateur riders’ handicap on the Monday night here back in 2016, the Tom Egan-owned five-year-old was slapped with a 12lb hike in the weights for his recent success at Ballinrobe.

This actually left Gary Carroll’s mount having to contend with joint top-weight but the rain that fell throughout the evening and turned the ground soft proved no hindrance to the 9/1 chance.

Initially Sionnach Eile cut out the running before relinquishing the lead after going half a mile but he remained well placed and was back in front a quarter of a mile from home.

From this point on, Sionnach Eile turned this into an utterly one-sided affair as he powered away from a discouraged field.

All the way to the line, he maintained an unrelenting gallop which saw him carry the day by six and a half lengths from the much improved Dame Rapide.

“We have him entered in the Irish Cesarewitch and we had a little question about him getting the two miles but after that performance I think he’ll get it. He will jump hurdles down the road and maybe in two years’ time he could run in the Galway Hurdle,” declared the trainer.

“He’s from a great pedigree. His brother, Knappers Hill, is a very good horse in England and of course he’s a half-brother to Swamp Fox. We were praying for rain and it came and there’s two things associated with an Irishman – an All-Ireland and Galway – and if you can get to one of them you are doing well.”

Gary Carroll earlier looked as though he might have bagged the seven-furlong James’s Gate Irish EBF Median Auction Maiden aboard San Anton who looked to have been delivered with a superbly-timed effort to strike the front in the last furlong.

However, in a bobbing finish he lost out to Jessica Harrington’s Roman Hands (3/1) who was building on a second at Bellewstown last month.

The Champion Thoroughbreds-owned winner was always on the pace and responded very well to Shane Foley’s promptings as the line loomed to score by a nose. The winning rider picked up a two-day whip ban for his efforts.

“He is an improved horse,” remarked the trainer’s daughter Kate. “He’s thriving and was very tough. As soon as the horse came to him he wanted to battle and he keeps improving. It is great for Champion Thoroughbreds who are a big Australian racing syndicate who also have another two year old with us,”

Another winner for the Harrington-Foley axis came courtesy of Willamette Valley (15/2) in the Guinness Irish EBF Fillies Maiden over a mile and a half.

This Craig Bernick-owned filly needed to step forward on the form of her first two starts but did so and clearly enjoyed the ground which often brought out the best in her dam, Fire Lily.

Willamette Valley was the only member of the field to get to grips with the front-running Ark and she moved ahead of that one over a furlong out.

Ark did not lie down once headed and was coming back again inside the distance but Willamette Valley held on by a neck.

“She loves that soft ground and we’ll think about looking for blacktype,” stated Kate Harrington. “She’s very game and I’d say this trip is a minimum for her.”

A MEMORABLE meeting for Peter Fahey got even better as he made it four victories at this year’s Festival when Sit Down Lucy secured the €80,000 Guinness Galway Tribes Handicap Hurdle over two miles.

Owned and bred by Padraic Ryan, this mare was produced in fine shape off a near two-month layoff and she was always to the fore under Sean Flanagan in a race that suited those that stuck close to the pace.

Indeed, Sit Down Lucy was vying for the lead from before half-way and it was after the last that she finally saw off fellow pace-setter Sil Ver Klass. When Ebasari got the last all wrong it was left to the staying on Teed Up to lead the chase.

He closed down the leader all the way to the line but his challenge came up half a length short.

“She’s a lovely, consistent filly and we always knew there was a good day in her,” said Fahey. “I don’t know what it is but the last three or four weeks the horses have clicked into form. I worked her last week with Darren (Harrison) riding and couldn’t believe the work she did. “The horses couldn’t have picked a better week to hit form. Her owner Padraic is a local from Tuam and he has always had horses with me so to come here to Galway and to get a winner for him is great.”

It was a tough meeting for odds-on punters and another short-priced favourite went astray in the Rockshore Irish Lager Race over a mile and three-quarters where Sandhurst (8/13) was floored by Shanroe.

In a race decimated by non-runners which resulted in just three horses going to post, the classy Karl Thornton inmate turned out fresh and well on his first outing since October.

Last year’s Ebor Handicap fourth came between Dinard Rose and Sandhurst to make his bid early in the straight and it wasn’t long before he got to the front.

Sandhurst was coming back for more at the finish but the Brian Smyth-owned eight-year-old finished with half a length to spare.

“It was a good performance as it has been an awful year for him. He has been sick since running in York last year, I’ve been trying to get him right and I’ve had to be patient,” commented Thornton. “I wanted to get a run into him before going back to York and this place was ideal.”

After hitting the crossbar on a number of occasions over the previous four days, Andy Slattery senior and junior did get amongst the winners as Flame Of Eire (17/2) followed up a recent Limerick triumph in the 50-70 rated Arthur Guinness Handicap.

The Mary Harney-owned filly responded well to pressure to close down the clear leader Brown Eagle from the turn-in and led inside the distance before getting to the line half-a-length in front of the staying on Molly’s Gamble.

“I thought this was my best chance of the week but when the rain came I didn’t know how she would handle it. She is still raw and I think she will be a better four-year-old” stated Slattery senior.

Henry and Rachael on the scoreboard

GABBYS Cross got Henry de Bromhead and Rachael Blackmore off the mark for the week as he sprang a 22/1 surprise in the €80,000 Guinness Galway Blazers Handicap Chase over the Plate course and distance.

Off the track since running fifth in a Grade A handicap at the Punchestown Festival and successful in a decent novice handicap chase at Naas in February, this Roger Brookhouse-owned seven-year-old took his form to a new level with this victory as he made it four wins from 14 starts.

In a well-run race, Gabbys Cross took his time towards the rear of the field but he began to pick his way through the pack over the course of the final circuit with the result that he found himself in front after the last.

His work wasn’t quite done at this stage as he was kept up to his work for the duration of the straight by the game and always prominent favourite Busselton. The latter couldn’t ever peg back Gabbys Cross though and went down by two and a quarter lengths.

“It is brilliant to get one on the board, he did it really well and is progressing all the time. He didn’t jump fantastically today, made one or two mistakes but got up the hill really well and stayed really well,” declared the rider.

Further evidence of the resurgence of the Matthew Smith string was in evidence in the concluding 50-75 rated Hop House 13 Handicap where La Hacienda (10/1) struck under Jake Coen.

This ABD Syndicate-owned five-year-old had run some good races at this track last year but looks an improved performer in 2022 as she was making it two wins from her last three starts.

The 10/1 chance came with a sweeping effort inside the distance to consign the favourite, Unanswered, to his second runner-up finish of the meeting.