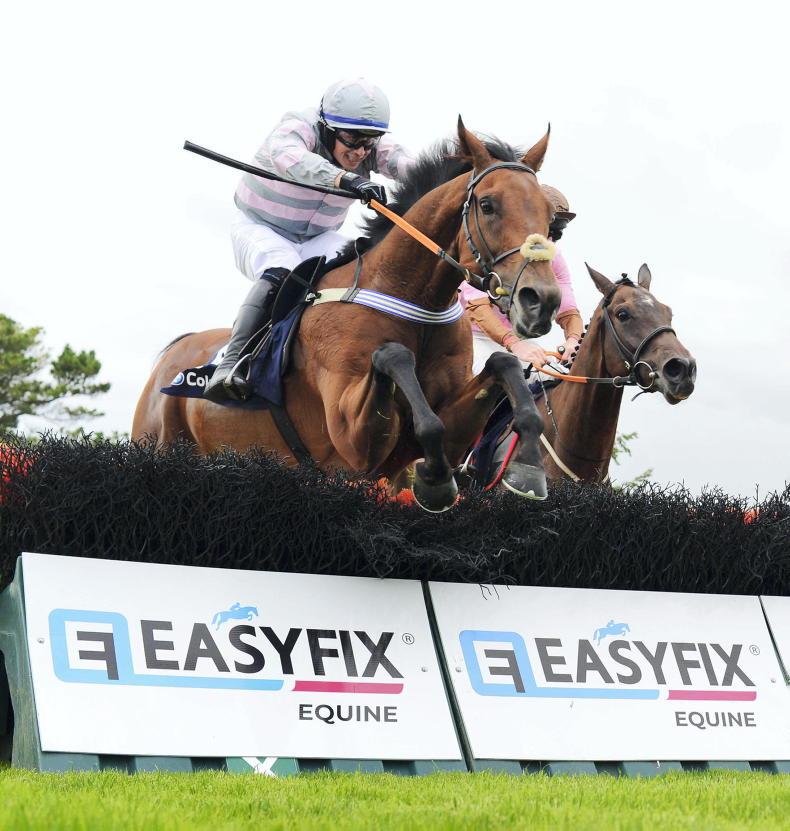 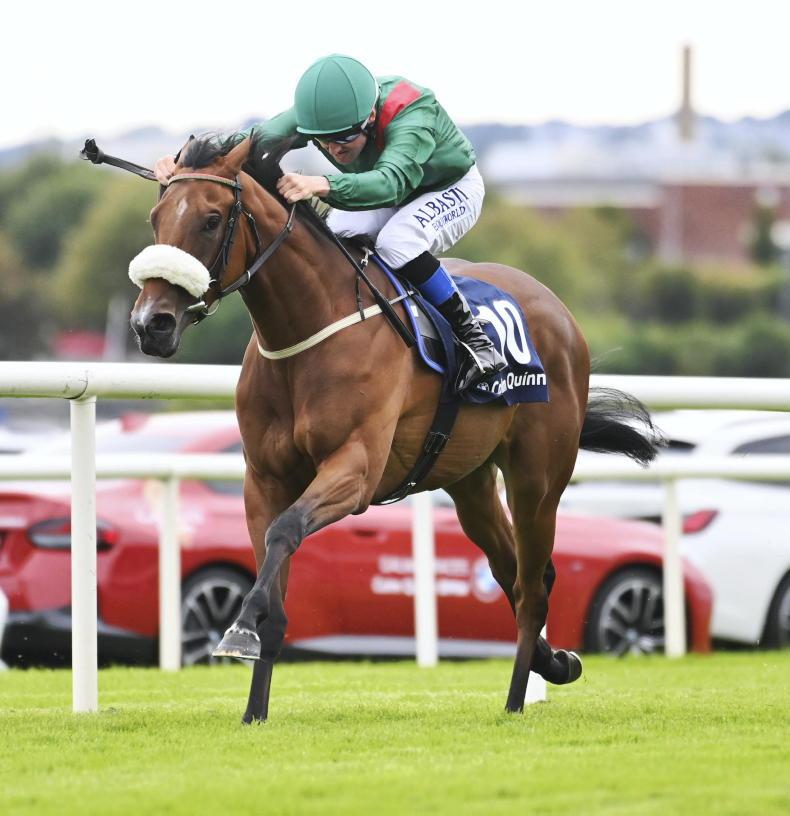 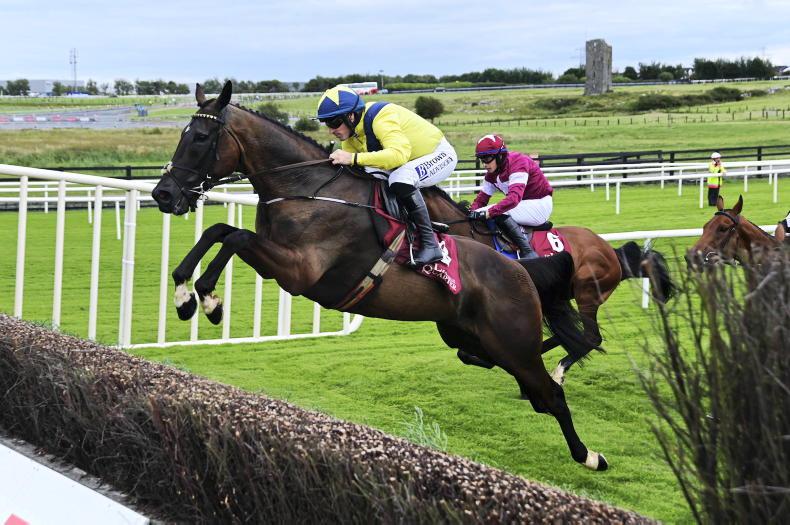 FOR the second evening in succession there was something of a turn up in the opener as Flaming Moon (11/1) upstaged several better fancied rivals to take the Listed Colm Quinn BMW Novice Hurdle for Matthew Smith and Bryan Cooper.

This five-year-old hadn’t been in the best of form on his recent starts but his winter form included a second in a maiden hurdle at Leopardstown at Christmas and his trainer’s uncanny knack of producing his horses in the form of their lives for this meeting was again in evidence here.

Flaming Moon made a good deal of the running and, crucially, he was quicker at the last two flights than the chasing Amir Kabir which enabled him to defeat that rival by half a length while the evens favourite, Tax For Max, had to settle for a close fourth.

Owned by Debbie Kelly and Gordon Cranston, Flaming Moon was taking his career earnings past €60,000 having been picked up for a mere €2,000 as a yearling.

“He always showed plenty. He won a couple on the flat and he had some nice placed form over hurdles. I was a bit hesitant to declare him but I said he was entitled to take his chance and I’m delighted,” remarked Smith.

“He’s fairly hard on himself unless you go on in front and he’s probably better off galloping away. Our horses were a bit out of form a month or two ago and we gave them a bit of time off.

“We started having a few runners in Killarney two weeks ago and had a couple of winners so we seem to be back in form, thankfully.”

Another evens favourite came up short in the next as a back-to-form Enniskerry (8/1) saw off Midnight Run in the Latin Quarter Beginners Chase over two and a quarter miles.

The Barry Connell-owned and -trained winner hadn’t been at his best on his last couple of runs but was restored to peak form under Sean Flanagan for whom he produced a bold and enthusiastic display up front.

On the long climb to the line, Enniskerry was joined by Midnight Run, but the eight-year-old son of Jeremy fought off that rival in determined fashion to score by six and a half lengths.

“It was his first run over fences and we were hoping he’d run well. He can be quite keen-going but fences seem to suit him and have settled him down,” said Connell.

“Hopefully we have a graded horse on our hands and he might have a break now and we’ll aim him at some of those early-season graded novice chases. Maybe he could be a horse for the Drinmore.”

Easily one of the stories of the flat season has been the remarkable progress of Dunum (5/1) who made it four wins on the spin in the 50-80 rated Caulfield Industrial.com Handicap over seven furlongs.

As he has been for the four-year-old’s three previous wins, Wayne Lordan was on board the Maurice Burns and Michael McCartan-owned gelding.

A stall-18 draw made this a significant ask for Dunum but he got into a good position, responded well to pressure to strike the front entering the last furlong and get home by half a length from Shawaamekh.

“He’s a very tough horse and Natalia and her partner Craig have done an amazing job with him,” observed Lordan. “He jumps and travels and makes life easy for you but it was a big ask for him today given where he was drawn and he’s done well to win.”

Tahiyra a name to remember

DERMOT Weld’s opening winner of the Festival arrived in style as the newcomer Tahiyra (7/2) dismantled her rivals with style and authority to run out a resounding winner of the Colm Quinn BMW Irish EBF Fillies Maiden.

A Siyouni half-sister to the brilliant Tarnawa, this filly couldn’t have made a more impressive start to her career in a maiden which boosts one of the most impressive rolls of honour in the country.

The Aga Khan-owned Tahiyra powered through the race for Chris Hayes and surged to the front over a furlong from home before galloping out to the line in great style to defeat the odds-on Dower House by some five and a half lengths.

“She had been working well. She’s slightly smaller than Tarnawa but she’d been doing everything right and hopefully she will show the wonderful courage and constitution that Tarnawa did throughout her career. Her next start will be at stakes level,” stated Weld who was sending out his first winner for six weeks.

“My horses have been a bit out of form, we had a virus towards the end of the spring and early summer and it has taken me a long time to get shot of it and to get everything clear. It wasn’t easy to identify, but I’m happy now we’ve everything right.”

A good evening for Gavin Ryan yielded a double which began when Pat Murphy’s Coreman (100/30) saw off the favourite, Karakoul, in the Caulfield Industrial Irish EBF Maiden.

In the colours of his breeder Maureen Hehir, Coreman got off the mark at the third attempt in a race where the outcome only ever seemed to concern Murphy’s charge and Karakoul. The latter eventually had to give best inside the last furlong as Coreman got on top to prevail by two lengths.

“Gavin gave him a great ride, he rides him plenty of work so he knows him. It’s great to get a Galway winner and it’s great for the yard. He’ll go into handicap company now and could be a nice mile handicapper for the rest of the season,” reported Murphy.

Ryan brought up his double on Mark Fahey’s Clear Quartz in the 50-70 rated Caulfield Industrial Handicap over an extended mile.

Now a three-time winner, the 15/2 chance was produced in fine shape off a two-month break as he raced on the pace before holding the late charge of Turbine by a length and a quarter.

Clear Quartz is owned by Jean Bird and he was providing his trainer with a first Galway Festival success.

“That’s magic. Gavin was super on him and I’m delighted for Jean. He’s a tough horse, a genuine horse and I’m just delighted to have my first winner in Galway,” remarked Fahey.