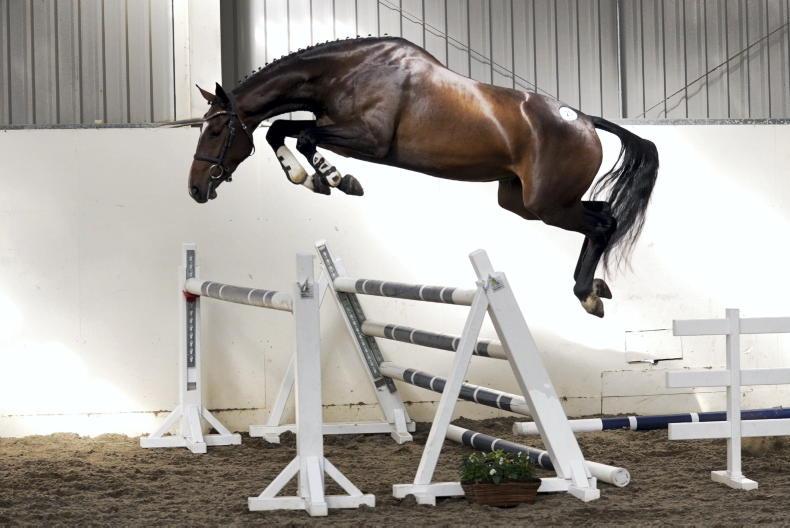 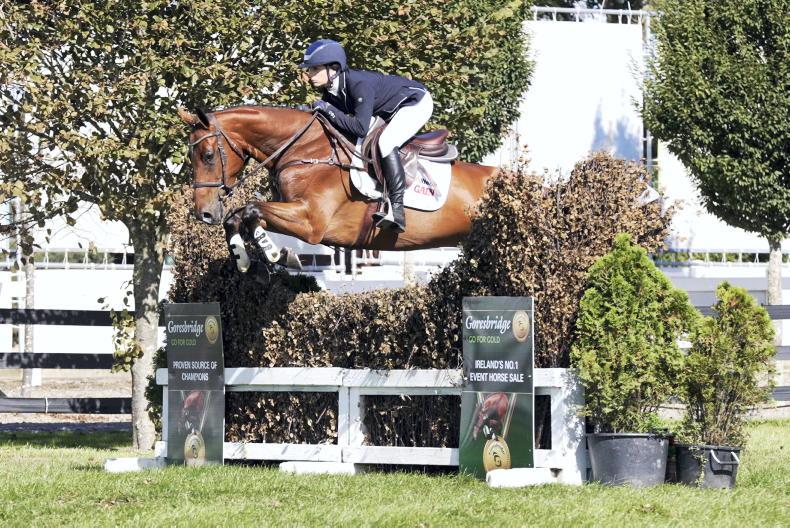 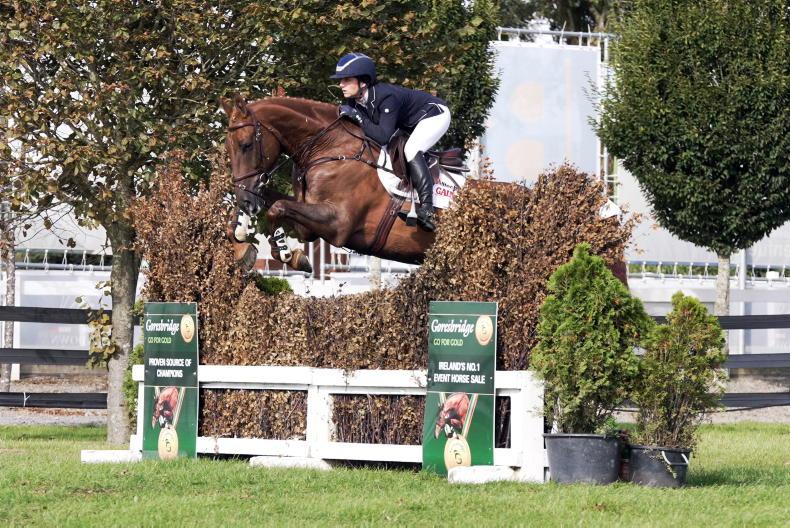 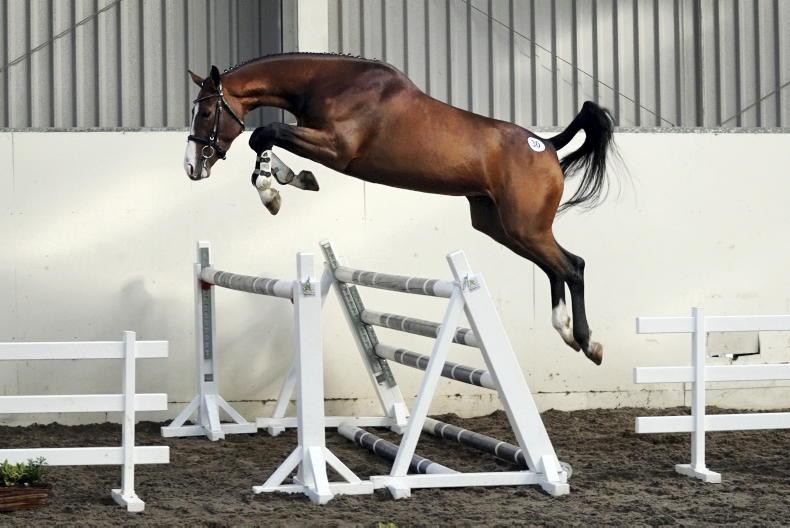 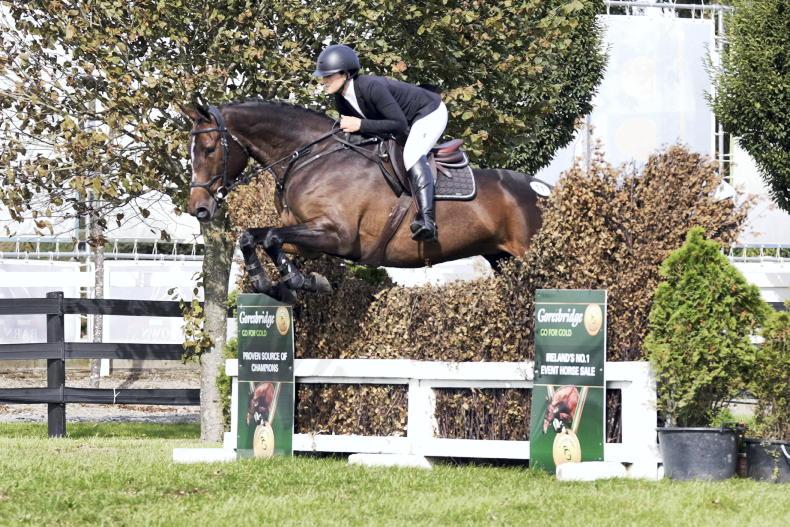 Lot 11, Elizabeth Ahern and Felicity Ward's EPA Elegance, a four-year-old filly by Wido (BWP) out of Miss Courcel (ISH) was secured for €40,000 by a telephone bidder at the Goresbridge Go For Gold Sale \ Tadhg Ryan Bit Media 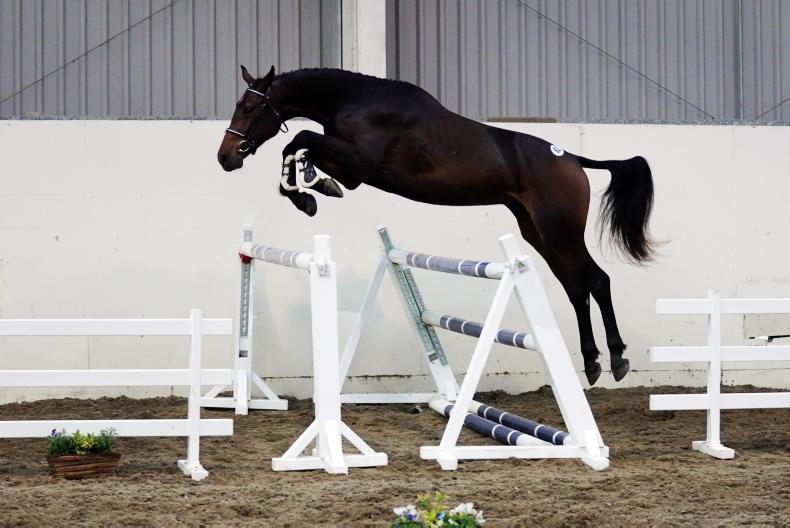 DJ O'Sullivan's Lot 62, NPS Lanzarote, a three-year-old gelding by Campagne II Z (ZANG) out of Fatima F (KWPN) was sold for €40,000 to Andrew Williams at the 2021 Go For Gold Sale \ Tadhg Ryan Bit Media
Previous Next

By Padraig Howley's Sligo Candy Boy (ISH), the brown filly is out of Monalease (GB) (TB) by Terimon (TB) and from the start, there was razor sharp competition among bidders with an opening online bid of €24,000 starting the ball rolling.

Described as a home-bred filly with 'a real wow factor,' she's a half-sister to Chincalease Cowboy (CCI3*-L), ridden by Britain's Laura Meadows, and also to last year's Go For Gold graduate MBF Gambler. MBF Starburst was knocked down in double quick time to Kentucky-based Knowles to get the three-year-old division of the top sale off to a glittering start. Prior to her sale, the sale-topping honours was temporarily held by Flynn and Bolger's Lot 15, MBF Major Lazer K. Described from the rostrum as 'a star of the future', the four-year-old bay gelding by Emir R (KWPN) out of L (Old) by Landsieger I (Old) opened at €20,000 and shot up to be on the market at €60,000. He was snapped up in the room by Andrew Williams of GHF Equestrian at €79,000 and topped the four-year-old division returns. Four lots later, the same vendors sold their RDS 2021 four-year-old champion, MBF Celtic Claddagh for €49,000. The chesnut gelding is by Celtic Hero B Z (ZANG) out of Janis B (ISH). Lot 11, Elizabeth Ahern and Felicity Ward's EPA Elegance, a four-year-old filly by Wido (BWP) out of Miss Courcel (ISH) was secured for €40,000 by a telephone bidder at Goresbridge

Fetching €40,000 from a telephone bidder was Elizabeth Ahern and Felicity Ward's EPA Elegance (Lot 11), a four-year-old filly by Wido (BWP) out of Miss Courcel (ISH). Williams struck again for DJ O'Sullivan's Lot 62, NPS Lanzarote, for €40,000. The three-year-old Campagne II Z (ZANG) bay gelding out of Fatima F (KWPN) by Diabeau (BWP) was described as 'an elegant modern event type with a great potential over a fence'.