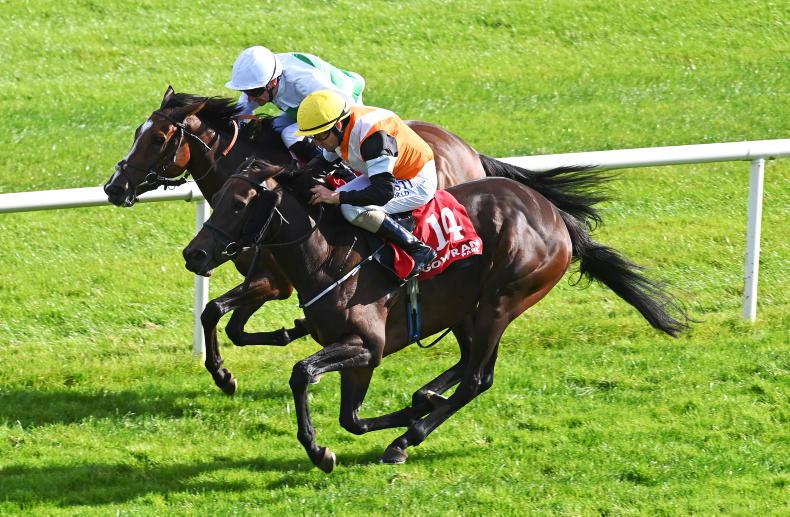 Jessica Harrington’s charge had been a listed winner at the track on her last visit, when opening her account, and stepped up again to land this nine-furlong prize.

Shane Foley produced his mount to lead over a furlong from home but the Muhaarar filly was soon tackled by English raider Kawida.

Paris Peacock found plenty for pressure in the closing stages to record a neck success at odds of 8/1.

“I think she’s improved since she got her head in front!” said Harrington afterwards. “It was rock hard here the last day but she didn’t mind the bit of ease today.

“Shane said today they went quick, he was in behind and when he pulled her out she took him into the race almost too quickly.

“When the other filly came to her she put her head down and went again. She’s been a revelation considering we couldn’t win a maiden with her.

“We’ll talk to Craig (Bernick) about what we do now. We have a few ideas but she’s won a listed race and won a Group 3 so what more can I ask of her now.

“She’s a nice filly with a nice pedigree. I’d say she might end up in America next year.”

It was a double on the day for Harrington and Foley who had also struck in the opening seven-furlong conditions race with Maud Gonne Spirit.

Olivia Hoare’s Intello filly was making her first start since last October and the 11/2 shot came with a strong surge inside the final furlong to beat Pretty Rebel by a neck.

“That’s great, she’s nearly a year off the track because of the ground. I haven’t been able to run her all year,” revealed Harrington.

“I have her in at Tipperary in a couple of weeks (Group 3 Concorde Stakes) and I’m just hoping for rain. She loves the soft ground.

“She was fourth in a listed race last year and she’s shown that she hasn’t lost it which is a great thing.”

JOSEPH O’Brien is eyeing up stakes races for Mister Mister after he got off the mark in impressive fashion in the mile maiden for colts and geldings.

The 5/2 shot had been a fast finishing third on his last visit to the track and quickened up smartly to lead over a furlong from home under Dylan Browne McMonagle.

Despite drifting to his right he soon settled matters, going on to record a three-and-three-quarter-length win over Covent Garden.

“It’s nice to see him go and win like that because it wasn’t a bad race and there was plenty of talk before it,” said O’Brien.

“He has plenty of options now, there is the Killavullan and the Eyrefield. He has a few fancy entries as we’ve always held him in high regard.

“I was a little worried as his runs have been on better ground but he obviously handled it well, and being by Sea The Moon would suggest he would handle it.”

In the preceding fillies maiden, the Jim Bolger-trained Speirling Beag proved a game winner in a tight finish to the mile contest.

Kevin Manning’s mount came to take a narrow lead inside the final furlong and the 15/2 shot stuck her neck out late-on to record a half length win over Lumiere Rock.

“She had a good run in Cork the last day. She stays very well and handles that ease in the ground,” said Manning, who was wearing the colours of Ennistown Stud.

“She stepped forward again from Cork and we’re happy with that performance. I think plenty of winners will come out of that, it was a decent maiden.”

The other maiden on the card was restricted to three-year-olds-plus who had a rating of 75 or less and it proved a nice opportunity for the Ballydoyle colt The Lute Player.

Having disappointed on his most recent outing in testing conditions at Cork, the Caravaggio colt confirmed earlier promise when landing the nine-furlong contest.

The 12/1 shot ran on well for Seamie Heffernan inside the final furlong to get up in the closing stages and beat front-runner Only For Me by half a length.

Stable representative Chris Armstrong said: “It’s nice to get a win for him and the step up in trip helped him.He had a good run first time back this year in Navan and last time in Cork just got bogged down in the ground.

“Stepping up in trip he just rode him a little bit quieter and the blinkers helped his concentration.

“We’ll look for a nice handicap somewhere for him next.”

on Dare to Flare

AMY Jo Hayes produced Dare To Flare with a late flourish to land the spoils in the apprentice handicap over nine furlongs.

The 10/1 shot was slow from the stalls but got a lovely run up the rail in the straight and grabbed Brewel Hill close home for a head victory.

Trainer Andy Slattery said afterwards: “My two were drawn 18 and 19. I kind of knew Heather Bear had no chance out there (finished 10th) but this lad breaks bad so I said it would make no difference to him.

“I thought an apprentice race would help him because they’d go too hard early. She got a golden highway up the inner.

Miracles In May also came with a well-timed challenge to land the 47-65 mile handicap under Ben Coen.

The Mark Cahill-trained gelding got a nice split between horses over a furlong out and the 15/2 shot led in the final 150 yards to record a length-and-a-half win over Take My Hand.

“He was in good form since the last day and I’d say the step up to a mile suited,” said Cahill, who trains the Approve gelding for Frank McNulty.

“It went well today and I think there is another race in Cork on Tuesday week. We might try and aim for that all going well.” 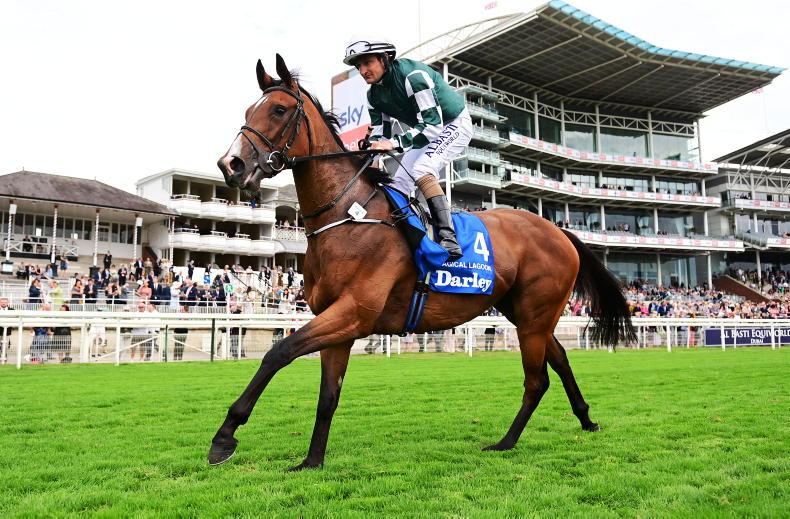 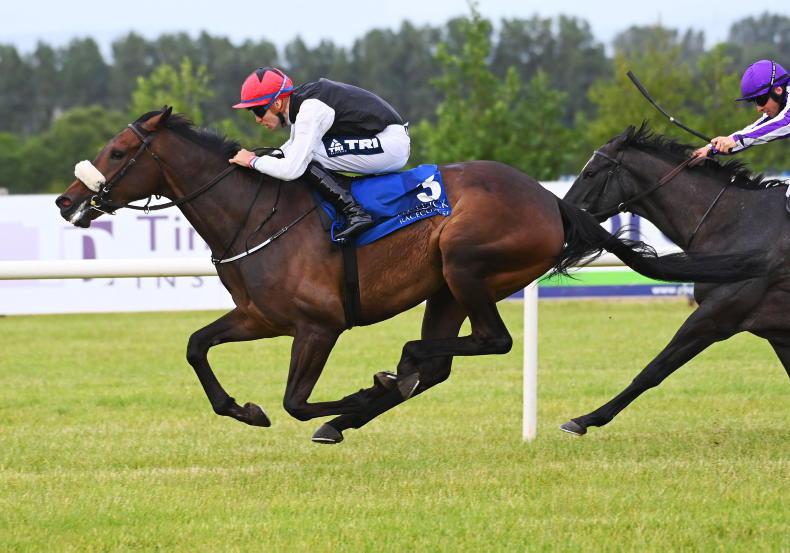 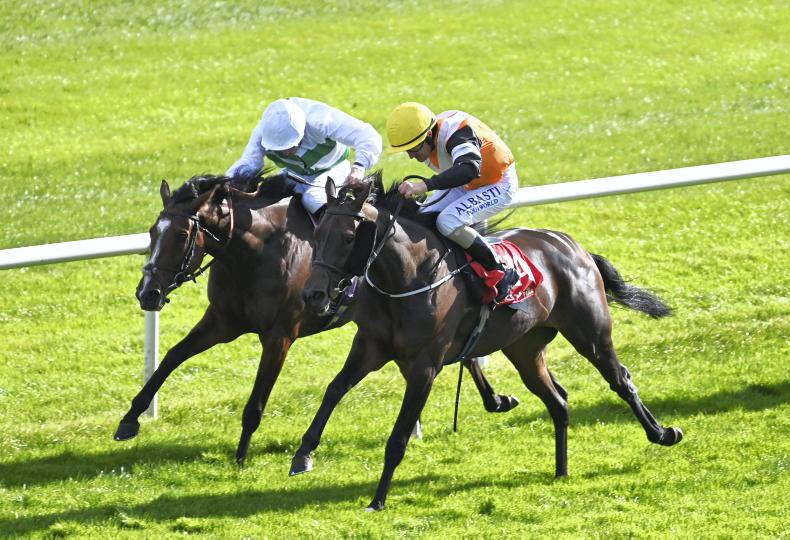 Andy Bate
ANDY BATE: Peacock on a par with previous efforts
Andy looks back at the time performances on the Gowran Friday card where Shane Foley made a winning move on the Harrington filly 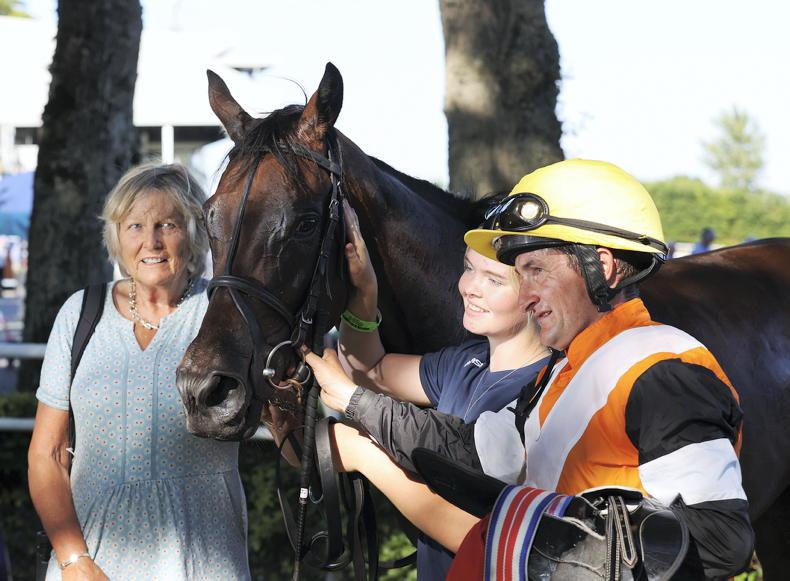 Irish Field Contributor
VIDEO: Paris Peacock struts her stuff in Gowran Park feature
America could be on the cards for the improving winner of Saturday's Group 3 contest