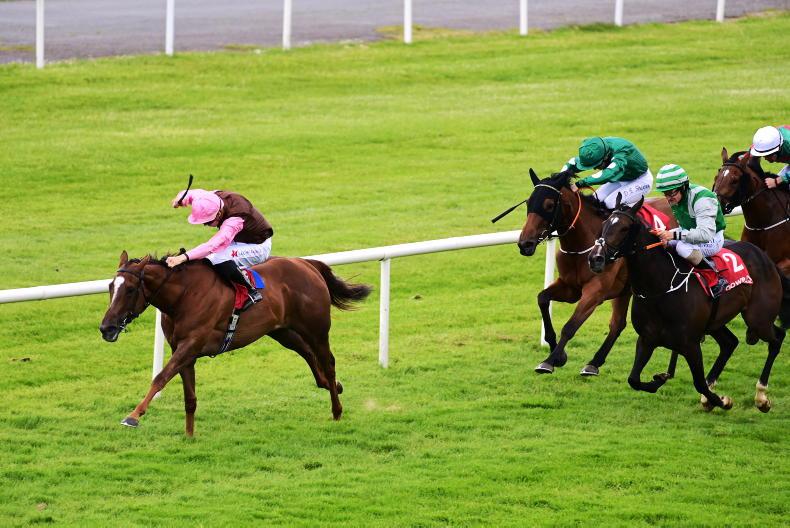 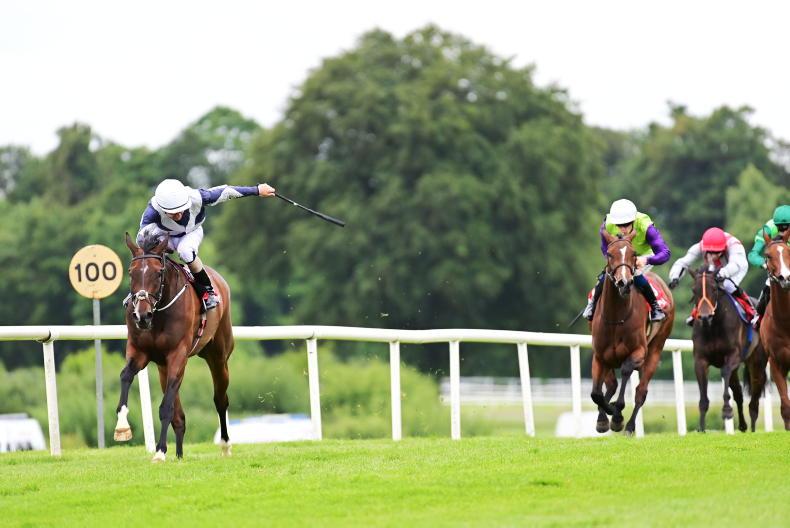 JOSEPH O’Brien warmed up for Royal Ascot in the best possible fashion when sending out a 39/1 plus treble highlighted by the feature race success of Night Of Romance in the Irish Stallion Farms EBF Fillies Handicap.

The Night Of Thunder filly won three times last year including a leg of the Racing League series at Doncaster just after being bought out of Karl Burke’s yard for 50,000 guineas at the Tattersalls July Sale. The 6/1 chance showed the benefit of her seasonal debut at the Curragh, switching left to challenge two furlongs out and staying on strongly inside the final furlong to score by two lengths from Pretty Rebel.

O’Brien’s assistant Brendan Powell said: “Dylan (Browne McMonagle) said the step-up to seven really suited her and he knew all the way up the straight that she was going to win. It’s great for Johne (Murphy, the former professional rugby player) as he has invested (with the Thoroughbred Racing Syndicate) in the yard for the last six years.”

The Shane Crosse-ridden Zoinnocent set the ball rolling for the Carriganog team in the Irish Stallion Farms EBF Maiden. The Zoffany filly, owned by Eric Long, quickened up nicely to be well on top in the closing stages for a one-and-three-quarter-length verdict over La Dolce Vita.

“She was a little bit slowly away again today, not as slow as the Curragh,” said Powell of the 15/8 chance. “She ran around a bit and is still green but she’s a big filly and is going to make a three-year-old. There should be no bother getting blacktype with her and she has a great attitude.”

Gear Up, a high-class juvenile for Mark Johnston when winning the Group 1 Criterium de Saint-Cloud, still runs in the colours of Teme Valley Racing but has joined O’Brien this year and opened his account for the season in the Thomastown Race. Jake Coen’s mount was prominent throughout and asserted over a furlong out to beat Tazaral by a length and three-quarters.

“I thought he gave him a lovely ride. It took a while to get to the front and once he got there he eased it up on the bend and then kept quickening,” said Powell of the evens favourite.

“That will do the horse’s confidence the world of good. He had a tough enough time as a two- and a three-year-old. Hopefully he may go onto something even better over further.”

THE novel occurrence of two horses with the same name meeting each other transpired in the Irish Stallion Farms EBF Fillies Maiden and, as luck would have it, the Flaxman Stables three-year-old Sierra Nevada with a USA suffix came out on top in impressive fashion.

After the 7/2 chance made all under Shane Foley for an easy six-length win, Harrington said: “She’s a massive filly and imagine what she will be like when she gets a bit older. She’s a half-sister to Pathfork and finally what she’s done at home she has brought to the track.

“She’s a lovely mover but has been a bit slow to learn. I put her in the Kilboy (Estate Stakes) this week so I’d say that will probably be her next appointment.”

In reference to the naming coincidence she added: “I knew there were two of them as I’ve seen the name entered a number of times and said I haven’t entered that filly in that race!”

There was another rare occurrence elsewhere on the card as Dunum and Angel’s Trumpet, who won the two divisions of a 47-65 mile handicap here last month, repeated the feat in the Gowran Festival Of Speed August 21st Handicap.

Dunum justified 3/1 favouritism in division one when keeping on well inside the final furlong to beat Everylittlestep by a length and a half and trainer Natalia Lupini said: “He seems to like it here and Wayne (Lordan) gave him a powerful ride again from stall 17. He got him across nicely and was always in the right position.

“I’m delighted for the owner Maurice (Burns) who bred him. It was his dream to breed and have a winner. He won’t mind an ease in the ground and we could aim at Galway.”

There was an incident about a furlong out where Hanbags N Gladrags, ridden by Billy Lee, was making some ground when slipping up and brought down Gavin Ryan’s mount Zaur. Thankfully both horses and riders were relatively unscathed, although Lee picked up a three-day ban for careless riding.

Angel’s Trumpet (13/2) was also never too far from the pace in division two and Leigh Roche’s mount just held off the fast-finishing and luckless Tashim by a head.

Winning trainer Peter Fahey said: “I’m delighted for the (Festival Dreamers) Syndicate and it’s great that a good few of them are here today.

“Most of them are from Galway so it would be a dream if we could end up there.”

SILKEN Ladder, owned by a partnership headed up by Tom Egan, followed up a win at Killarney last month when taking the Golf At Gowran Park Handicap in great style.

The well-backed 5/4 favourite was given a positive ride by Gary Carroll, stretching clear from over a furlong out to beat Hot Sunset by a comfortable three and three-quarter lengths.

“She’s progressing,” said trainer Joe Murphy before adding: “She wouldn’t want it any faster than that and if the ground dries out over the summer we might wait until the autumn.”

Eighty Eight (5/1), trained by Johnny Murtagh for the Nanboku Syndicate and runner-up twice here earlier this year, opened his account when patiently ridden by Danny Sheehy to beat Urban Oasis by two and a half lengths in the Ladies Day Apprentice Handicap.

“The step-up in trip suited. He’s a big, fresh horse and I think it has taken a while for the penny to drop.

“He would be better with a bit of juice in the ground,” said Sheehy.