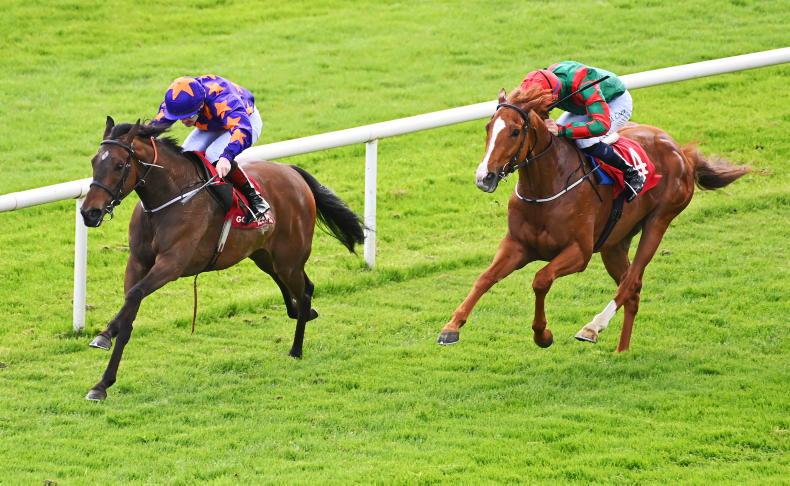 Zoinnocent can build on a promising debut fifth in a hot Curragh maiden. Joseph O’Brien’s filly was a little slowly away and always fighting a losing battle at HQ, but she did pick up well to eventually finish fifth to Zarinsk. She should show the benefits of that experience tomorrow.

La Dolce Vita is the pick on form. She finished third to Deneuve in a Naas maiden first time out then wasn’t disgraced in a Group 3 at the same track next time. She looks good enough to win a maiden.

Dane Fete is taken to reverse Killarney form with Silken Ladder. Both horses charted a wide berth throughout that contest, but Gavin Cromwell’s horse had to come wider, but was still able to pick up and finish strongly. He is better off at the weights now and has the scope to improve further.

Seeingisbelieving has a chance, now back in handicap company. He has been disappointing on his last two starts but he was fifth in the Madrid Handicap off 8lbs higher on his seasonal debut, and that form is strong for this contest.

This can go to Princess Rajj, who is chasing a hat-trick. She was a good winner on her penultimate start and then won in the style of a filly who had plenty more to give when a half-length too good for Galleria Borghese at Listowel on her latest start.

New York Angel is a big danger after her win over a furlong further at this couse last month. That race has worked out well with the third Celtic Crown winning a big premier handicap since. Affable is also noted, given she is starting to look competitive again off a mark 2lbs higher than her last win.

Handbags N Gladrags can win at Gowran again. He won over this distance here on his seasonal debut and put up another good effort when fourth to Dunum on his most recent start. He faces that rival again, but off better terms, and this big field could play to his strengths, as he’ll be held up to come through late.

Dunum defied a wide draw to win here last time but he’s been cursed with another wide berth here. He should go well again, as should Everylittlestep, who finished third to him last time and has the scope to improve again.

Gatsby Cap is another course-and-distance winner who can score again. The Patrick Hayes-trained six-year-old won here last season and races off the same mark today and off the back of a decent comeback run, again at this track. He finished a staying on sixth to Angel’s Trumpet, and that should put him spot on now, with a draw in stall one an added bonus.

Angel’s Trumpet should go well again, especially if he can get to the lead from another decent draw. Pimstrel is another to consider off the back of his stable/seasonal debut third at Killarney.

Urban Oasis has been a revelation this season but this could be one step too far, given he’s up 12lbs from his last win. Lady Arwen could be the one to beat him. She did well to win over seven furlongs here last time, staying on strongly to win a handicap that has worked out well. She has general scope to improve now, especially coming up to this trip, given the way she raced the last day and considering she is by Postponed.

Chocolat Blu is another to consider on handicap debut. His most notable piece of form was a fourth to Emily Dickinson at Naas on his second start.

Watch your Sierra Nevadas here, literally, because there are two horses of the same name. Of the pair, Jessica Harrington’s version looks to have a better chance. She finished fourth to Galleria Borghese at Naas and that was a good effort. But Kerkirya finished ahead of her in that race and she looks a more solid option, not least because she has some smart juvenile form last season, having finished second to useful fillies Limiti De Greccio and Villanova Queen.

It might be worth excusing Fantasy Lady’s comeback run in the Amethyst Stakes, where she was last of six to Pretreville at Leopardstown. She was a little weak in the betting beforehand and may have needed the run. On her form from last year, not least an excellent fifth in the Irish 1000 Guineas, she has the winning of this, receiving weight from her three main rivals.

Leo De Fury and Gear Up set the standard, each on a mark of 104, but Tazaral is worth considering back at the scene of his five-length maiden win last season. He was fifth on his comeback in the Irish Lincolnshire and appeals as the type to progress this season.