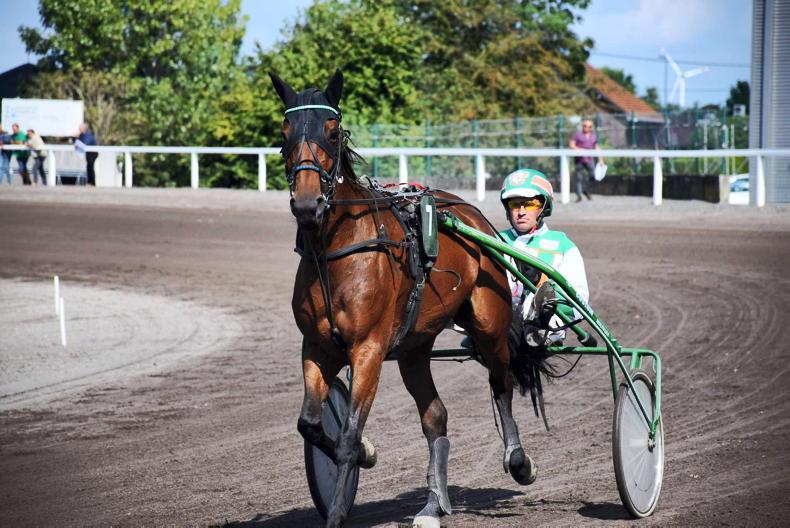 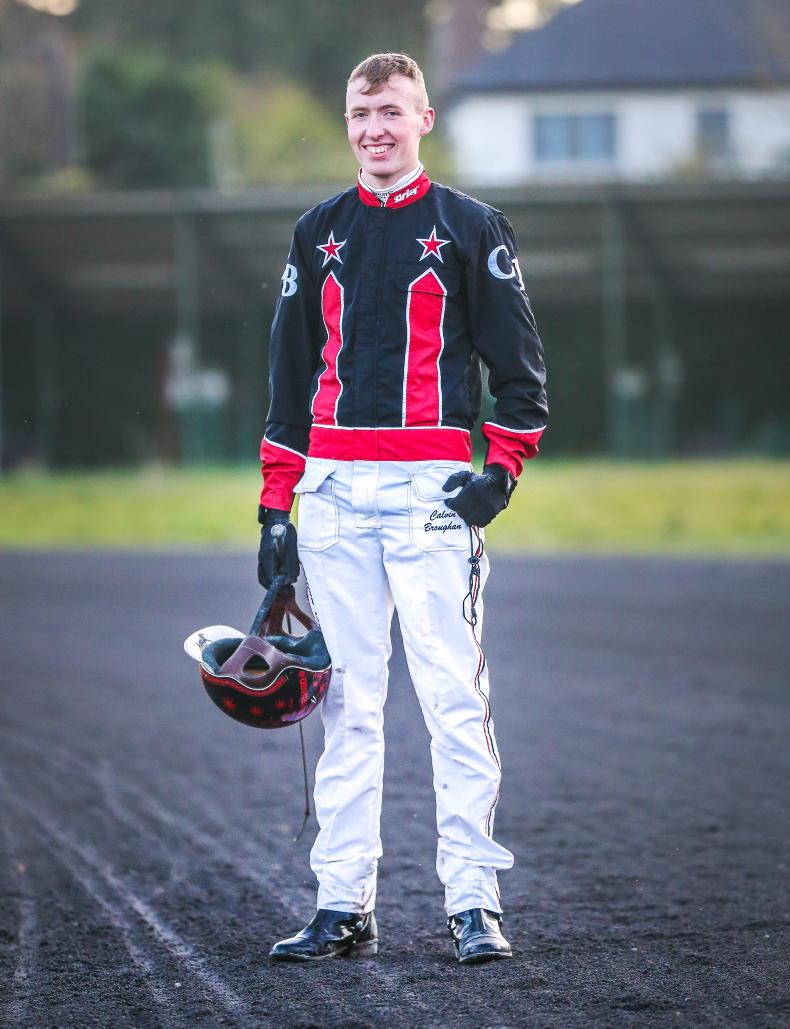 THE 18-year-old Eoin Murphy from Inishbeg Baltimore drove his first classic winner when landing the George Deane Memorial with Brywins Starship at Dunmanway on Saturday afternoon.

Eight pacers went to post in this year’s renewal which looked a wide-open contest. Brywins Starship led at the start but Share A Smile, a noted front runner, took up the running after a lap. The field were well bunched heading down the back at which point Supreme Sunshine joined the leader and led heading out on the final circuit.

The presentation area was flooded with family and friends of the winning owner Mike Healy, trainer Conor Hurley and driver Eoin Murphy.

“My nephew Richard has driven Starship but is gone to Australia, but Eoin is an able replacement,” said winning owner Mike Healy.

“We gave him instructions and he drove exactly the way we planned. He’s a young lad with a bright future. This is the third year in a row the horse has won this race and being from Dunmanway myself makes it so special as George Deane was another from the town.”

The win was Eoin’s first on a pacer. He was born into a family steeped in racing. His father Tadhg is a former champion driver and leading trainer while his mother Christine (Burchill) was a top jockey and driver best known for exploits with Stoneriggs Rascal , Rob Hawk and Another Rascal. Perhaps Eoin’s uncle Donal might see his job as retained driver for IB Stables under threat.

Duc D’Arry owned by Denis O Reilly from Drimoleague cemented his reputation as one of Ireland’s leading trotters when putting in a faultless display to take the A to D Trot.

The winner made light of his 40-yard handicap. He actually got to the front on the second circuit and won by seven lengths in a time of 2’34.0” which was only a second slower than the pacing final. A few more runs in Portmarnock are on the menu before the winter break.

IB Felicity was a popular winner for John Boyle who is sidelined with injury. Rodney Camden was the hare in this contest and was only reeled in by IB Felicity in the final 50 yards.

Seamus quill came in for the spare drive as Oisin Quill who was the original catch driver was on work duty.

Grange, Clonakilty-based Timmy Moloney’s winning run continued when landing the opening Grade G & G1 Pace with The Red Rebel. Moloney wasn’t hanging around this time and made every yard of the running. The combination were earning their third win of the campaign for Schull based owners the O’Callaghan brothers.

The win brought Moloney’s tally of season wins to 11 and he was crowned champion driver for the Cork region for 2022.

The Kanes have been farming winners in Cork this year and cousins Mark and Sean went home with one each.

Sean, based in the Naul in Co Dublin, steered home Eclair De Limon to a four-length winning margin from veteran Vallanzana.

Mark Kane based in Trim, Co Meath was on the scoresheet with Cyrano De L’iton who eventually got the better of Empereur Souverain in the Grade D to F Trot.

They say a change is as good as a rest and this rang true for Meadowbranch Dynasty who gave Anthony O’Donnell his first winner.

The winner was highly thought of by previous owners, but the Limerick-based O’Donnell seems to have found the key to success with this five-year-old son of Kikicolt and had a four-length winning margin.

A minute’s silence was observed for the late Jack De Bromhead who would have been known to many harness racing fans.

The meeting brought down the curtain on the 2022 harness racing season in West Cork, but racing continues at Portmarnock Raceway and Annaghmore Raceway in Co Armagh.

Details of all fixtures and results can be found on www.irishharnessracing.com

Kane out of luck in Belgium

ANNAGHMORE’S meeting last Sunday was cancelled due to the death of Queen Elizabeth II. The cancellation meant that Irish trotting followers were able to focus on the progress of Patrick Kane junior as he represented this country in the UET (Union Europeenne du Trot) drivers’ championship in Belgium over Saturday and Sunday.

Patrick has been driving out of his skin on home shores in recent weeks but unfortunately a few things went wrong for him in Mons on Saturday and Tongeren on Sunday. On day one Patrick looked set for second place only for his horse to gallop in the straight. His next drive didn’t gallop but actually paced a few strides, a big no-no with the eagle-eyed Belgian officials.

The 36-year-old farrier salvaged some pride on day two with a fourth placed finish and a third. Officially Patrick finished 10th of 11 overall. He will be anxious to do better should he qualify for the European Championships in 2023. He is currently four behind John Richardson in the Irish national standings. Patrick might be worth a tenner bet to win the 2022 Irish title as his UK commitments will be drying up into the autumn.

“The whole trip was a great experience,” Patrick told The Irish Field. “The standard of horses and drivers was impressive. If you race often enough horses will go off stride, especially when you don’t know the animal.”

Patrick’s supporters included his wife Rachel, children Eliza and Louie and his parents Paddy and Tina.

The champion was Alessandro Gocciadoro of Italy. The top five drivers qualify for the world drivers championship.

Over to you Calvin

WE missed the detail recently that Cabra apprentice Calvin Broughan (19) received notice that he had met the criteria to go forward to the European Apprentice Drivers Championship at the San Pardo track, Mallorca on October 23rd.

Calvin will be hoping that lightning can strike twice for the same yard, as this is the very same hippodrome where Calvin’s mentor Sean Kane drove a 60/1 winner in another international competition in 2020.

Patrick may have drawn a blank on his recent foray so it will be up to Calvin to wear the green, white and gold colours and hopefully remind the big European nations that harness racing takes place here and that Ireland has drivers to equal any country.