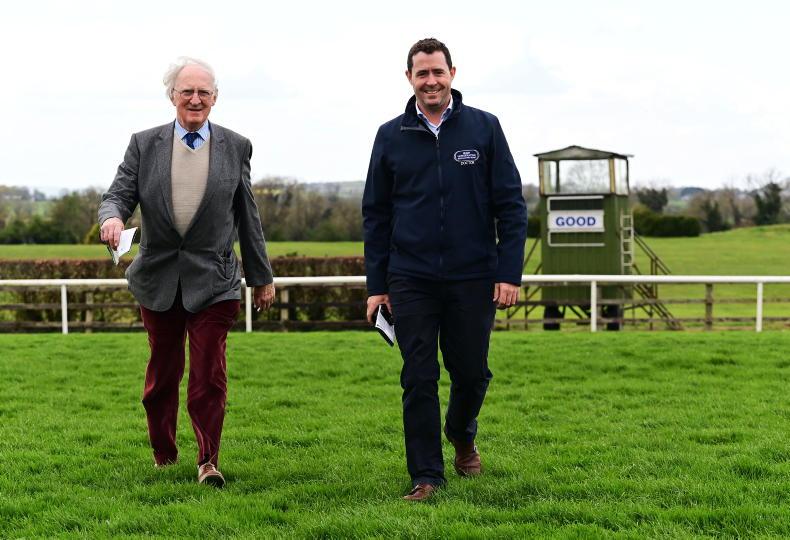 AT every race meeting in Ireland, both the IHRB and racecourse provide at least one doctor each. Both doctors are on track looking after the riders when they fall as well as dealing with illness or injury to the spectators. The IHRB doctor leads the medical team (two-four) doctors and at least six but often 20+ volunteer ambulance members on major festival days), clears injured jockeys to ride and liaises with stewards and other IHRB officials on any issues.

John Downey has been a racecourse doctor for over 40 years. He’s been ever present at Clonmel, Tipperary and Thurles throughout that time as well as helping out at Wexford, Gowran Park, Tramore, Punchestown, Fairyhouse and Navan Racecourses at various stages. In recent years he spends more time working at point-to-points and is the first or certainly last port of call for a hunt requiring a last-minute doctor for their meeting to go ahead!

A native of Abbeyfeale in Co Limerick, Downey attended school in Blackrock College. An all-round sportsman, he played Gaelic football for the Limerick minors and won a Munster Junior Cup medal with Abbeyfeale RFC in 1966. After graduating with a medical degree from UCD in 1967, he lived and worked in Britain and Germany before returning to Ireland in the 1977 to take over a GP practice in Carrick on Suir.

The Turf Club and Dr Walter Halley instigated a series of improvements to their medical systems in 2003 following the tragic deaths of Kieran Kelly and Sean Cleary, one of these being the set-up of a small panel of doctors with one in attendance at every race meeting. John joined the team to cover the south-eastern tracks.

In 2005 his eldest son Andrew joined him in the practice and John could now go racing more frequently and at tracks all over Ireland. His interest in working at the races stemmed from his huge admiration for the riders and the potential harm they place themselves in for our pleasure as spectators. “They are fantastic patients and a pleasure to look after - all they want to do is get better as soon as possible and get back on the horse,” he said.

John’s passion is for National Hunt racing and he has been making the pilgrimage to Cheltenham almost every March for 50 years; March 2015, when John accompanied four of his five sons to the 21 Club for a few drinks, is still remembered fondly whenever the family gather!

Richard Downey always had ambitions to follow in his father’s footsteps. “We all went racing from a young age and I had many days out from boarding school in Newbridge College to accompany Dad to the races if he was passing nearby. Once I started studying medicine, I regularly joined him in the ambulance for experience.”

Since graduating from medicine in UCD in 2007, Richard has worked in 15 hospitals in Ireland but the majority of his training was in the Orthopaedic Department at the National Spinal Injuries’ Unit in the Mater Hospital. He also did a masters in Sports & Exercise Medicine in Trinity College.

At various stages of his career, he also worked with the IRFU (women’s and U20s national teams), FAI, Leinster Rugby, the Newport Dragons (for their Irish Pro 14 games), UCD and Kildare GAA. In his everyday life, he works for four joint replacement surgeons in the Mater Private Hospital and teaches orthopaedic surgery for UCD and RCSI in Cappagh Hospital.

He began working as a racecourse doctor in Fairyhouse in 2009 and later joined the medical teams in Dundalk, Navan, Tipperary, Clonmel, Punchestown, the Curragh and Leopardstown. He joined the IHRB panel of doctors in 2016. The highlights are always the meetings he works at when father John is also on duty.

“When I started out Dad and I would occasionally work at the same meeting. Our days together increased when I joined the IHRB team in 2016 but despite what he says, Dad is very much the boss when we work together!”

Attending the races also afforded Richard the opportunity to catch up with his godfather, Brendan O’Rourke, who works as MC at a number of Irish tracks.

Richard will work approximately 100 race meetings this year. While admitting that cold winter nights in Dundalk aren’t the most glamorous, he loves the buzz of working at the major festivals. There is also great fun to be had on his “working holidays” at the Kerry and Galway festivals.

There’s often a chance to play golf or swim in the sea before racing. Richard plays golf beside his home in Killeen Castle and formerly played rugby and GAA. He has a Towns Cup medal with Boyne RFC from his days in Drogheda Hospital.

Sadly, Richard and his wife Dorene, lost their only son George aged three in June 2020. “He was the greatest child that ever walked the earth and is terribly missed. There is a huge void in our lives without him around,” Richard said. “He had an incredible personality and character that touched so many people’s lives in the short time he was with us.”

John Downey turned 80 years old on June 1st. He and his wife Noelle, who have 14 grandchildren including George, celebrated the occasion at home with family. Richard said that most people are shocked to discover his dad is now an octogenarian: “He is still incredibly sharp. He keeps himself busy, and enjoys working at race meetings and point-to-points now as much as ever.”

A well-liked and respected figure within the industry, John has a fantastic relationship with the jockeys he looks after and has attended many of their weddings and family occasions.

His son is particularly proud of the esteem in which is father is held: “I never have a day at the races where several people don’t ask me “how’s your Dad?” he says. And long may that last!

John and Richard Downey were in conversation with John O’Riordan