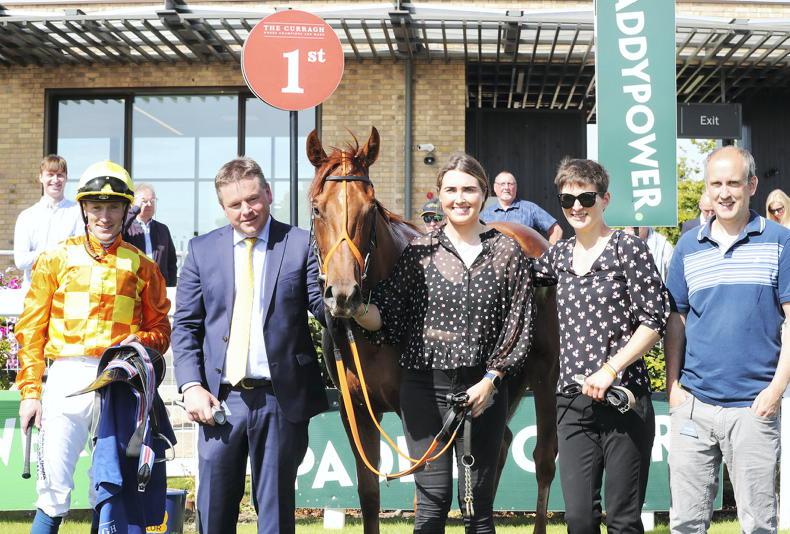 TREASURE Trove winning the Group 3 Round Tower Stakes at the Curragh last month was especially satisfying.

As Managing Director of owners Merry Fox Stud, seeing the first horse we have had in training in Ireland win at blacktype level was vindication of our decision to send the filly to Paddy Twomey.

With prize money in this country comparing very favourably to Britain, it is quite likely that we will expand our interests here in the coming months.

I developed my interest in racing and breeding through my mum, Eleanor (Hadden), who established Coolruss Stud in Co Wicklow.

Having tried various different enterprises over the years, such as dairying, beef and sheep, mum went out and bought a few yearlings. Although, my dad wasn’t on board initially, he soon changed his mind when everything took off!

Despite being just a small, family-run operation, we have bred three Grade 1 winners: Cooldine, More Of That and Blow By Blow.

While I helped out on the practical side during my time in primary school, it was not until my late teens that I took a keen interest in the pedigrees.

At that point, I devoured every sales catalogue, stud book and breeding theory publication I could lay my hands on.

Essentially, I was self-taught in that regard before picking up more practical experience during a gap year after doing my Leaving Certificate.

I was introduced to James Delahooke (bloodstock agent/consultant) while working on the sales circuit.

That, in turn, opened up the door for me, into an exciting new world I had always wanted to explore. Through James, I learned all about conformation and how to get my eye in. My further education with regard to pedigrees and matings came via Bill Oppenheim, a close friend of James. Both men often worked side by side at the sales and I was fortunate enough to shadow and learn from each.

Throughout the time I spent studying for my BA in Equine Studies at Writtle College in Essex, I continued to do sales work for James. After I graduated in 2003, I took a year out and worked full-time for Bill Oppenheim.

It was fascinating to see how James and Bill, both recognised as industry leaders within their field, took different approaches to their work. I like to think that I was able to take the best from both men and gain a well-rounded education.

In 2004, I was fortunate enough to gain a place on the prestigious Godolphin Flying Start programme.

As part of my placement, I was sent to America, where I worked on a bloodstock project for WinStar Farm. It was a fantastic opportunity to be part of something that ended up mutually beneficial to each of us.

In my second placement, I worked in London with leading bloodstock consultant James Underwood. Again, he had a different approach to James (Delahooke) and Bill (Oppenheim), so I learned that bit more.

After graduating, I was offered a two-year contract working for Darley Stud. The latter had recently incorporated Gainsborough Stud into their operation and were selling off some mares. Prior to doing so, I was employed to visit the different farms in Ireland, the US and UK, study the pedigrees and advise on what broodmares to keep. In conjunction with John Ferguson, I also advised on the potential matings for each of those mares.

Darley were happy for me to set up as an independent consultant outside of that work, which meant that I was able to build up a list of private clients. Upon graduating, I also took on the role of Manager of Coolruss Stud; my home place. I had previously been very involved prior to the Flying Start but naturally had to relinquish responsibility in order to pursue that avenue.

With the sales season at its busiest from September through to January and the breeding season not getting into full flow until spring, I am fortunate in being able to combine both roles (manager and independent bloodstock consultant) without much overlap.

I wrote a couple of breeding-related articles for Pacemaker magazine in 2007. However, despite being quite good with stats and pedigrees, I found that I wasn’t as proficient with deadlines!

Craig Bennett (Merry Fox Stud), who had just bought his first yearlings 12 months earlier, read an article and emailed me. While he could understand stats and numbers, he acknowledged that he knew little of pedigrees and wanted to learn more.

We arranged to meet up in Manchester and just clicked from the outset. I began working as a consultant, giving my opinion at the sales and pedigree analysis/matings.

As Craig (Bennett) gained more confidence in me, my role grew. Despite that first group of yearlings achieving little of note on the racecourse, two of the four subsequently went on to breed Group 1 winners.

As both the broodmare band and number of horses in training increased, I was appointed Managing Director of Merry Fox Stud in 2015. Craig has a fantastic understanding of pedigrees at this point and we now sit down together to plan the matings each season.

Given his incredible strike rate and stats, Paddy Twomey was a trainer we had been looking at for a few years. Treasure Trove looked the perfect horse to give him, as we knew we would be in and out fairly quick.

Given her size and pedigree, she was always likely to make a precocious juvenile, so it meant both parties would find out early on, if we could work together.

Paddy liked the filly from day one and phoned us up after a couple of months advising us to name her.

That vote of confidence was exactly what we had hoped to hear and since making her racecourse debut, the filly has done nothing but improve.

We are seriously considering the Breeders’ Cup at the end of the year, as we feel that Treasure Trove is one who may excel as a juvenile.

There has to be a slight concern that she may not train on, so we are determined to make the most of her while she is at her peak.

Whatever, the outcome at the Breeders’ Cup, it has been a great journey with Paddy and his team this season. He has done a fantastic job with Treasure Trove and more than justified our decision to send him a horse.

Gary Hadden was in conversation with John O’Riordan