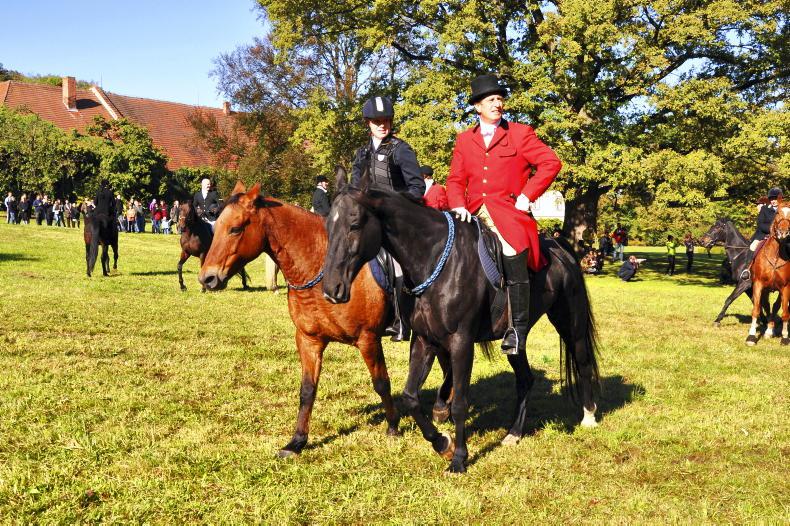 Vaclav Vydra (pink coat) hunts his horses, Gustav and Demon, in just a neckstrap in the Czech Republic \ Noel Mullins 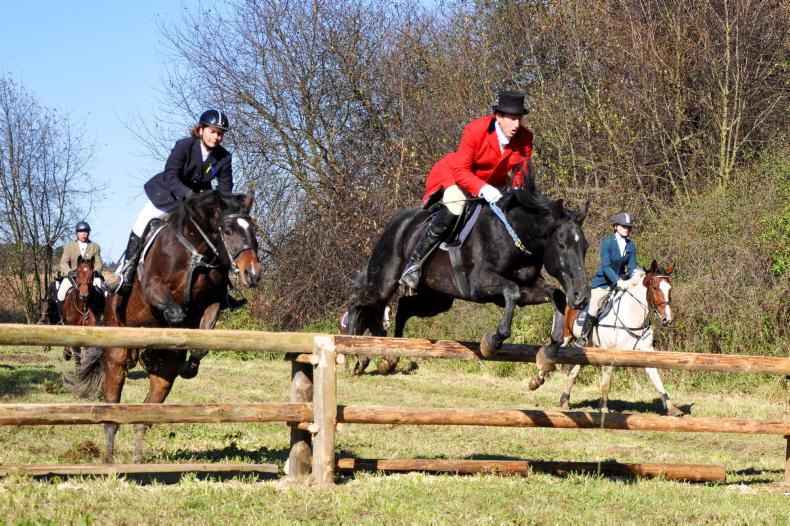 Up and over: Vaclav Vydra hunting in a lead rein neckstrap only \ Noel Mullins
Previous Next

HUNTING in the Czech Republic?

Yes, there is hunting in the Czech Republic although somewhat different to Ireland. They hunt a drag line which harks back to when Adolf Hitler, who occupied the old Czechoslovakia, banned live hunting in 1934 as he considered hunting with dogs as unsporting. What a surprise!

A few years ago I travelled with Aidan O’Connell to hunt with the Asbach Hounds and our host was his friend Prince Johannes Lobkowicz, whose estate sits on 15,000 acres. He had four smashing Irish hunters in his stables at Drahenice Castle, produced by well-known Limerick horse producers Mikie Reardon and John McNamara.

There I met an amazing horseman - Vaclav Vydra. Today, more than ever, there seems to be a huge interest in horse owners keen to advance the training of their horses through various techniques, and Vaclav Vydra has certainly taken the concept of horsemanship and training to a new level.

He hunted his horse all day with no bridle, reins or bit. Instead he looped a lead rein around his horse’s neck like a traditional neck strap. As field-master, he gave the hunt followers an excellent lead over every conceivable obstacle, drains, banks, ditches and uprights, and usually had his feet out of the stirrup irons!

Vydra has a real respect for the intelligence of the horse, and believes that if you are both prepared to work closely, then a common bond will develop, and extraordinary things are possible.

Born to the stage

Vaclav Vydra was born in Prague and is one of The Czech Republic’s celebrity superstars of television, film and stage. His parents were two famous Czech actors, Vaclav Vydra and Dana Medricka.

His grandfather, also named Vaclav, was a well known stage and Shakespearian actor, and a Director of the Czech National Theatre.

Vydra rode a horse, for the first time, as a child of 12 years in a riding school in Hungary. Due to education and career priorities, it was 20 years later that he resumed riding. In 1996, he was offered a horse by a friend to take part in a Par Force Hunt (on a large estate).

The hunt was held in the village of Chlumec. Par Force hunting is a very old tradition in Bohemia (the home of the famous Pardubiche Velka Steeplechase), and Moravia, and the possibility of crossing natural country has recently stimulated a renewed interest in horses. But it was not until 1998 that Vaclav bought his first horse when he was 42 years of age.

Initially he boarded his mare, Nelly, and her filly foal, out on a farm, and they were joined shortly afterwards by his two hunters, Gustav and Demon.

Together with some friends, they purchased a farm that practices a new philosophy in keeping horses. Their approach is a natural, free and active boarding environment, based on a book Vaclav read by a German veterinarian Dr Hiltrud Strasser.

It is often referred to as a ‘natural boarding facility’, where horses are not stabled but free to live in a herd environment in a replication of some of the conditions that they would experience in the wild. The farm is designed with various paths, and so gives horses a reason to move from area to area with freedom to move all day and night with other horses.

He found it changed horses’ behaviour, they were more likely to communicate, more relaxed and self-confident making them more open- minded to training.

Vaclav’s initial interest in alternative training and riding practices was inspired by the methodology of Pat Parelli, Monty Roberts, and Andre Bourlet. In time he found he could take his horse to another level by taking it in steps, first riding in a headcollar and then eventually his horses started to respond more to leg aids only.

One day in a showjumping competition, he decided to take the final step and removed the headcollar and use instead a lead rein clipped loosely around the horses neck just for balance. He described it as just a marvellous feeling, a sense of freedom for both of them, and an exhilarating sense of unique communication between horse and rider.

Vaclav admits that he was always more interested in riding rather than schooling, and like so many riders, did not pay any attention to ground work.

To prove his technique, in summer he would take his horse into the countryside on a long trip for several days to effectively bond with him. He always make sure that their time was pleasant, and find a good place for grazing, usually near a lake so that they could go swimming together.

He set more challenging conditions as time went on, like uphill and downhill routes which he finds builds trust. His horse would then start to listen to him and understand his forward aids.

Another facility that Vydra has developed on the farm is barefoot trimming. Many hoof problems in horses, he maintains, often stem from bad boarding, too much confinement, unnatural feeding and too little movement. So Vydra adopted the practice of keeping his horses barefoot. This is a movement that is promoted by Dr Hiltrud Strasser but has been challenged by Henry Heymering, the president of The Guild of Professional Farriers.

Strasser’s methods are often associated with clinical hoof trimming for serious problems such as laminitis. The movement has its roots in the study of mustangs in the wild who roam for 15 to 20 miles per day. Author Jamie Jackson made a study of wild mustangs from 1982 to 1986 which found they live longer, and don’t have the common hoof problems associated with domestic horses. He promotes ‘wild horse trim’, by trimming what is worn, and leaving what is naturally there on the hoof. In 2007 Jackson introduced the concept to Houston Mounted Police, and now all 38 police horses are barefoot.

The theory is, after removing shoes, it takes up to a year for a hoof to grow back a high quality tough hoof wall and build strong internal tissues. Occasionally a hoof boot is used to help the process.

Vydra believes that by allowing the leg to move more freely – because barefoot horses can feel the ground – that they have better traction. Flexing hooves help provide better blood circulation to the entire body, letting nature provide the wear and tear that keeps them in trim.

Vydra says, ‘the hoof is a shock absorber, blood pump, a tactility and metabolic organ of the horse. If a horse is incorrectly shod or trimmed, the functionality of his hooves is seriously inhibited’. He also added, ‘But a barefoot horse should live in such conditions that enable him to keep the hooves healthy, have round the clock freedom of movement on solid ground in the company of other horses, with daily hoof watering’.

Like many hunt followers, Vaclav Vydra is a man of many talents!