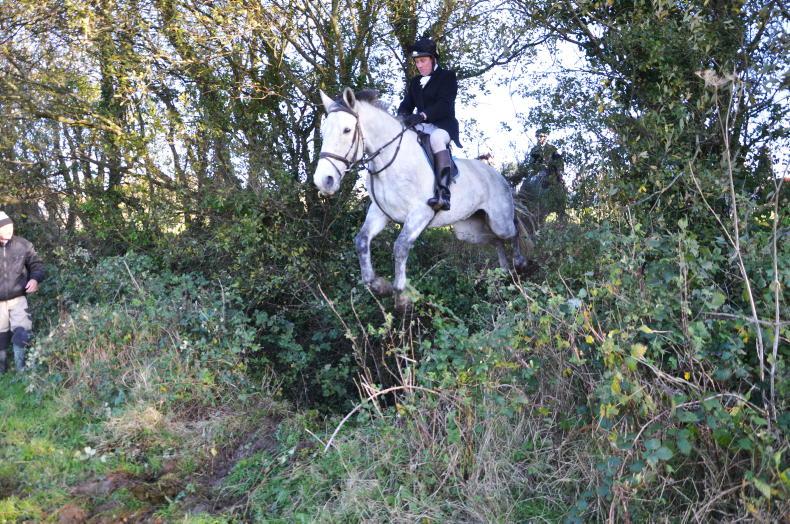 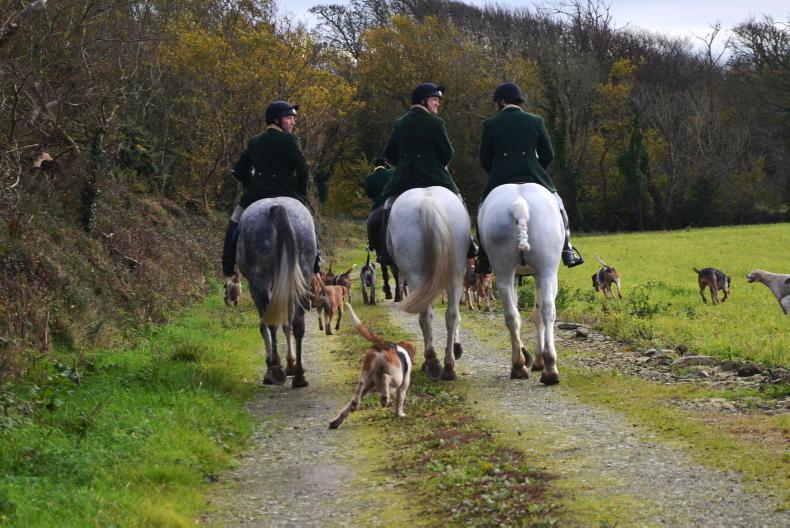 THE Killinick Harriers are entering another interesting era with the appointment of Garry Stephenson as master and huntsman. He follows a long line of master/huntsman of the pack with Matt Roche, Jack Deacon, John Roche, and John Stafford, who was an exceptional rider across country, and all have entertained followers and visitors many from overseas with their quality of hunting and especially their Wexford horsemanship.

Garry was born to be a huntsman as his father William whipped-in to the hunt when his uncle Jack Deacon hunted the pack. Interestingly, the hounds are back in the kennels that Jack Deacon used.

Garry has been hunting with the Killinicks since he was eight years of age and also kennels a foot pack, the Bridgetown Foot Hounds. As I have seen over the years any huntsman that started hunting on foot has that rare hunting gene that you get when you hunt so close to hounds. He also whipped-in to Paul Scallan of the Island Foxhounds, but his ambition was always to hunt the Killinicks.

Garry has competed in various equestrian sports but nowadays he has little time what with hunting hounds and running a large horse enterprise of over 50 horses, breeding, breaking and producing sport horses and thoroughbreds.

The meet was at the popular Halfway House in Ballycogley near Kilmore Quay, well known for its quality food and hospitality. The Killinick followers are all great riders as they have the best of hunters that they produce themselves, and they cross challenging country just for fun. This is no point looking for easy options with the Killinicks, and if you don’t have a hunter and a rider that is up for the challenge, then you are better off staying at home.

The first time I visited the Killinicks to report for The Irish Field was probably more than 20 years ago. I remember it because John Stafford was master/huntsman and while he was moving off, Jack Lambert was riding his great Irish Draught stallion, international eventer and Grade A showjumper Grange Bouncer.

Jack said to me, ‘Have you got your camera ready?’ With that he jumped a huge hedge, protected by five strands of barbed wire, with just two strides off the main road to a drop into the field. It was an example of a great combination of horse and rider, but Jack left his friend James O’Connor, father of former flat jockey Warren O’Connor, standing in awe.

James said: “I suppose I will have to jump it too or I will never hear the end of it”, and away he sailed over it! O’Connor is now the hunt’s most senior riding member and on his next birthday he will be 82 years old. O’Connor and the Killinicks are known for their charitable work. The highlight here for me was their Bacon & Cabbage Meet for charity, which could be for a school, church project or for some family who had a difficult event in their lives. The day ended with a sit down bacon and cabbage dinner in the pub in Killinick.

Every year I looked forward to seeing the next batch of three-year-olds learning their trade in the hunting field, made by talented horsemen like Jack Lambert, Ado Moran, John Stafford, Albert Whitehead, Johnny Murphy along with ladies like Ann and Clare Lambert, Katie Stafford, Corina Bowe and Louise Codd amongst many others.

Up for the challenge

When the youngstock showed their talents, they were much sought after, sold on as hunters, eventers and showjumpers. The National Hunt jockeys used to enjoy hunting in Killinick knowing that the locals would seriously challenge them cross-country. Regular visitors were Paul Carberry, Tommy Treacy and Barry Cash. Killinick is big blind double-bank country and from the followers’ point of view ‘the bigger the better’, as it brought out the smiles on their faces if they got to the other side. Their point-to-point in Lingstown is one of the few banks courses in the country.

The new huntsman/master Garry Stephenson had great support from adjacent packs with Paul Scallan, huntsman of the Island Foxhounds, who had previously whipped-in to John Stafford, horse dentist John Ellard, Mikie Moran, David Geogh, Seamus Cowman, who I travelled to America with a few years ago to hunt with the Genesee Valley Hounds, together with Jack Lambert.

Also on horseback were Declan Roche, Anna Mai Stafford, jockey Donal Devereaux, Martin Geough, James O’Connor – crossing country like someone half his age – and Katie Stafford, hunting her prize-winning Irish Draught stallion Dennistown Prince of Pride. Maria Bates was on foot as was Tom Sinnott, a talented photographer who has been recording the Killinicks for years. Three of the best known horsemen in the area, Jim Underwood, Walter Kent and Mick Berry, were also following.

Garry had 12½ couple of Modern/English hounds out and it was to be a challenging day as it was so warm and scent would suffer accordingly. The first draw was Richard Busher’s around the castle at Ballacogley. The covert held a brace and a half but they were reluctant to leave and hounds beat up and down the covert and eventually got them dislodged but with scent so poor, hounds did well to hold the line until it soon petered out.

The next up was Power’s of Thornville and Garryhack where hounds ran on into Dermot Day’s with some nice banks to be crossed which kept the followers on the move. Ed Goggins’ covert held and they ran on over Mary and Leo Doyle’s, two great Killinick supporters.

Miss Davidson of Bargy always holds and hounds showed their concentration and drive and the sweet sound of hound music as they pushed their pilot on over Hoare’s until they reached winter corn which did not hold an ounce of scent. So after they checked, the huntsman picked them up and crossed the road into Wexford Equestrian Centre, owned by Orla and Pat Peare.

It really is an impressive set up with its own indoor arena and a beautifully manicured outdoor ménage that has a series of cross-county obstacles ideal for competitions or schooling. They maintain a busy competition schedule and it also has its own tack shop.

Drawing the back of the centre, they crossed into PJ Corish’s, but the huntsman was far from finished as he drew across Billy Codd’s onto the well-known Killinicks Lingstown banks course taking them on a spin to Codd’s Bay and Fintan Codd’s and blowing for home in Willie Sarsfield’s as they were a long way from the meet and had a good hack home.

It was a great start to the season, and the future looks bright for Garry Stephenson as he enjoys enormous support, and every huntsman needs the support of the followers.

We wish Garry every success as master and huntsman.

The Killinick Harriers were formed about 1830 and hunt South East Wexford over single and double banks. 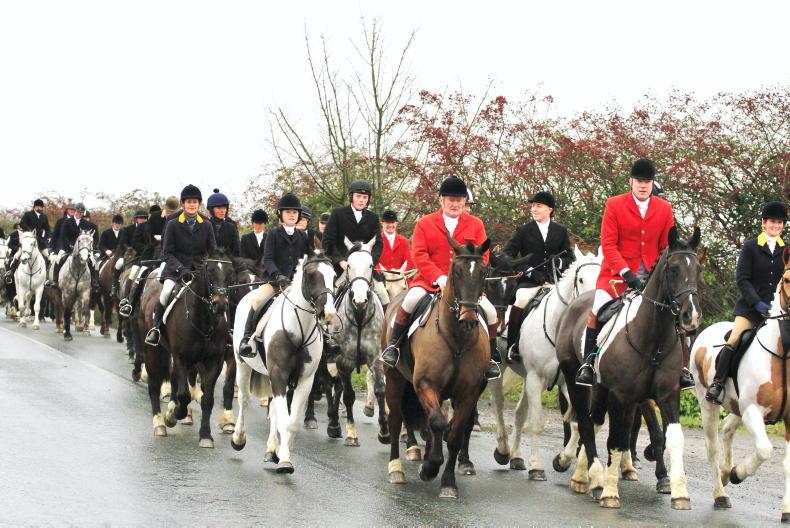 Irish Field Contributor
PICTURE DESK: Out and About
Photographers Catherine Power, Noel Mullins and Tom Sinnott bring you all the action from recent meets of the Ward Union Staghounds, the South County Dublin Harriers and the Killinick Harriers 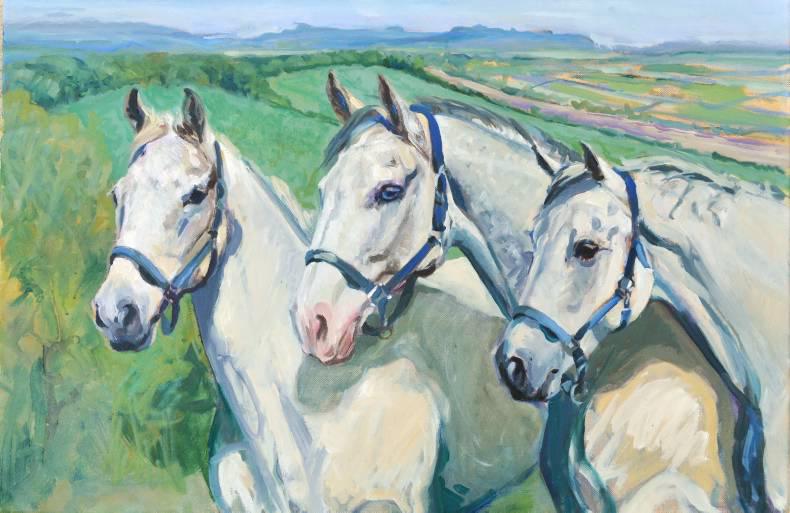 THE HEART OF RACING: Ollie Ellwood
Former amateur jockey Ollie Ellwood is now a full time artist based in Co Wexford and specialises in painting horses, dogs and rural landscapes