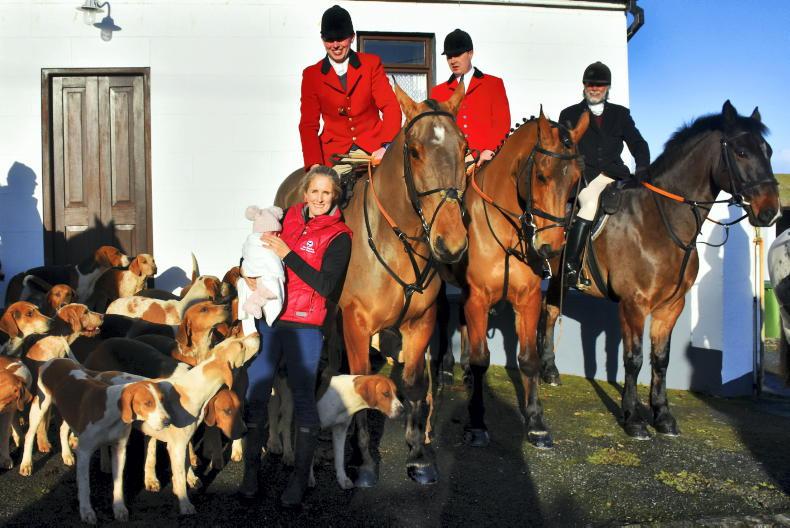 Four-week-old Jasmine pictured at her first meet with her mother Kitty and her father, Niall Dunne, huntsman of the Westmeath Foxhounds at their Castletown Geoghegan meet \ Noel Mullins 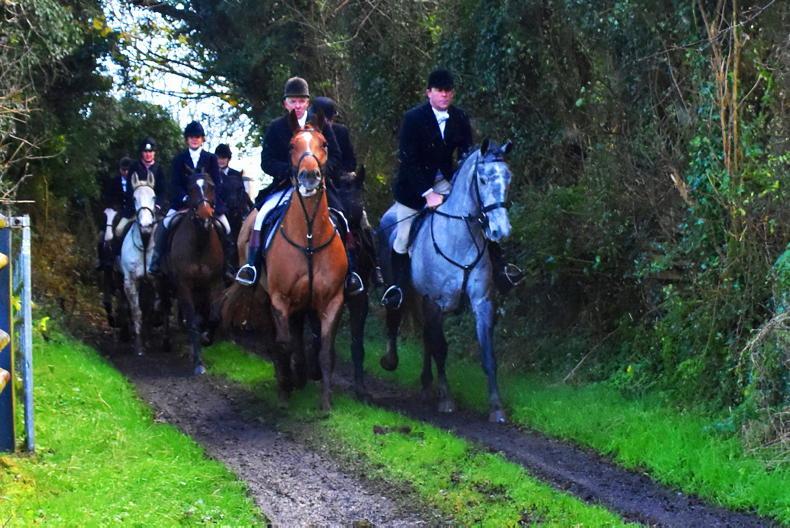 James Lowry, field-master of the Westmeath Foxhounds, and Ken Carroll (right) at the meet at Castletown Geoghegan \ Noel Mullins
Previous Next

IT was one of my best days hunting this season, but you need to pack the tea flask and sandwiches if you are going hunting in the great unspoiled country of the Westmeath Foxhounds as it is always going to be a long day.

They move off on time, and always have more than enough draws planned to make the best use of daylight. One is struck by the great team that they have on the ground which says a lot about the popularity of the hunt staff that attracts real hunting enthusiasts who give up their time out of real interest.

Niall Dunne is a popular huntsman and as one follower remarked to me, ‘This huntsman is doing a great job’. His grand uncle was the late Larry Rohan, a legendary master of the Ward Union Staghounds, and his father Brian was field-master of the Westmeath Harriers.

But he enjoys the support of the masters Ann Derwin, Helen Moorehead, Jim Derwin and Faye Flynn, a granddaughter of the late master and huntsman John Smith. Their chair Emily Murphy, whose husband is racehorse trainer Ciaran Murphy, was with their daughter Megan, as well as honorary secretary Marion Mortell whose husband David was a former master.

Another key member of the team is former huntsman James Lowry who hunted the pack for 19 seasons and the Streamstown Harriers for four seasons. He acts as field-master, knowing every farmer in the area. Niall is a well-known hound breeder and they won the Best Old English Doghound Class for the first time at the National Hound Show with Padlock.

The pack is a mixture of Old English and Modern but the plan is to go back to the Whiteface line breeding of Grammar, Copper, and Poacher of former huntsmen John Smith and James Lowry.

In the meantime they have been using Meath Bingo. They breed for ‘voice’ and it shows. Professional whipper-in Garry Reilly is joined by Derek O’Hara, Shane Dunne, who whipped-in to his brother in Waterford, and his father Brian. The equally efficient ground crew are Kevin McGuire, Mark Riggs, Peter and Declan, Andre and Adam Boulibasse and Alan Summersgill. Former point-to-point jockey Shane McManus is the man to stay close to for the road followers.

The meet at the village of Castletown Geoghegan, near Kilbeggan Racecourse, was a hive of activity with a large turnout at Ned Caffrey’s Bar. The youngest person at the meet was the huntsman’s four-week-old daughter Jasmine, who was with her mother Kitty, an equine osteopath who also rode for German international show jumper Paul Schockemöhle’s yard.

The village has been associated in the past with the Bryce Smith family of racehorse trainers and the well-known professional gambler and racehorse trainer Barney Curley who lived in Middleton Park House which he raffled during the 1980s recession for £1 tickets, selling 1.5 million tickets. I recall meeting him when I was hunting the Russellstown Beagles. As I cast them across the avenue he stopped to chat.

He was immaculately dressed in a three-piece pinstripe suit, a fawn cashmere overcoat, shining black leather shoes and a Pandora hat, but interestingly he wore no tie. Former American master Harry Worcester Smith wrote in 1912, ‘Meets at Middleton Park’, the home of Cecil Boyd-Rochford, were always well attended, and no covert was oftener drawn than the dining room, and that was never blank’!

One was struck by the quality and turnout of the hunters particularly of horse dealer Jim Derwin, Ken Carroll, Shane Dunne and field-master James Lowry. Niall Whelan was on Sinead Lowry’s dun hunter as she did not get home from work in Monaghan. Also hunting were Aine Shorthall and James Derwin, Sonia and Derek O’Hara, John Flood - who you could meet anywhere - while Trevor Badger was in a hurry to put on a shoe with little metal left to keep him going. He owns Bridge House Stud which stands thoroughbred, sport horses, and Connemara stallions.

The roster includes Let the Lion Roar, Sirillio, Cappella, and the Connemara Dunlewey Seamus that carried his sons, Monty and Harrison, from childhood.

Prominent also were John Tunney, David McCormack, Dessie Green and Dympna Early. Rosie Wentges certainly has an equestrian pedigree as her grandfather, Captain John Wentges, was master and huntsman of the Little Grange and the Fingal Harriers as well as the Blackwater Otter Hounds.

Her aunt, Fiona, is a former Irish Olympic event rider, and she writes the Slippery Saddle piece on the hunt, and is a talented artist of animal portraits. Trainer John Larkin, Cillian Dunne, Sandra Commiskey and Ellie Gartland, who rides for John, were visiting from Louth. The sun shone earlier but later the conditions were, in the words of my daughter, ‘baltic’. I was never so cold, but I forgot about it when I heard the wonderful music of the Westmeath pack which started early. There are almost too many foxes in the country this year due to so little hunting for the last two years.

The first draw in Joe Custerly’s hounds found straight away taking them on a spin in a loop of the Plantation and over the point-to-point course where they marked him to ground. They crossed the road into Cathal Ennis’s where the pack was on song again heading in the direction of PJ Kane’s Furze, and over a selection of deep wet drains, hedges and stone walls where many riders got an early bath as hounds disappeared from view towards Finian O’Neill’s, marking here again. We saw another fox earlier, but O’Neill’s Covert remarkably held another brace and hounds settled on the line but the huntsman eventually stopped them as there was so many cattle out in this area.

By now what would be a normal day’s hunting was done by 1.30pm, but there was a long way to go as the huntsman moved on to Glengorm and found again for a nice run by Tullaghansleek Stud, established in 1867 and owned by Tim Carey who stands thoroughbred, sport horse, Connemara and Irish Draught stallions and also offers A.I.

Scent petered out so hounds were taken to the next draw back in Finian O’Neill’s where they found again running across the road into Glengorm where they made a bee line for Dromore Hill where they checked. The huntsman tried Careys again but it was blank but they had better luck back on Dromore Hill where they had another customer on the move. But despite trying so hard, poor scent was against them so the huntsman wisely blew for home after a long wet, cold but very busy day.

It was good to see the followers repair to Ned Caffrey’s Pub, as it is important to support rural pubs who are going through a tough time at the moment. 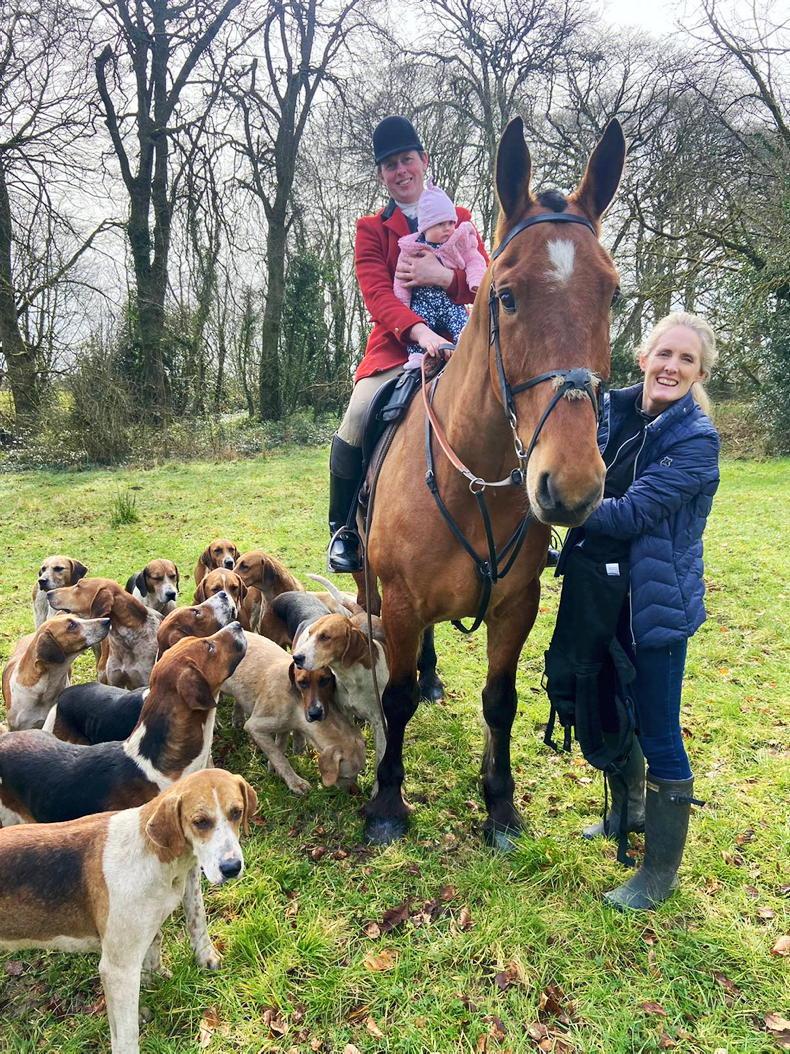 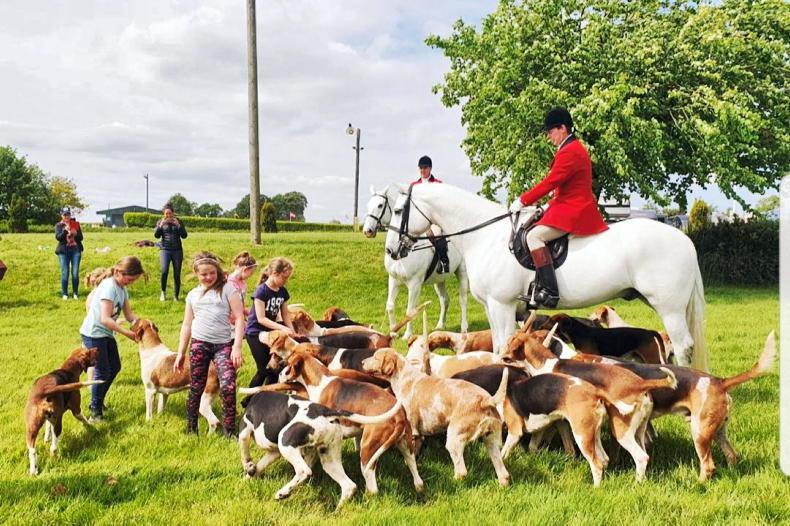 PONY TALES: Getting the hounds out
The Westmeath Foxfounds were out and about at Mullingar International Horse Show