Title: HUNTING: Singing in the rain... 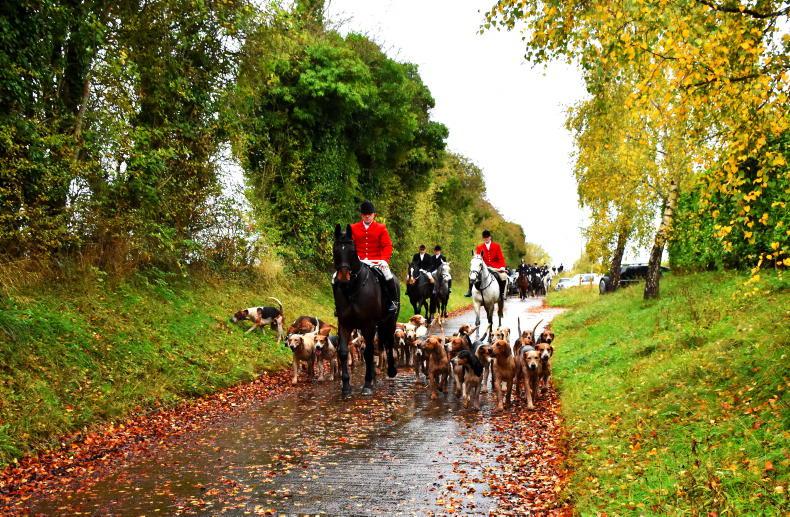 Huntsman of the Kildare Foxhounds Padhraic Moynihan with whipper-in Charlie Vose with hounds, and Mark Murtagh and Simon Holohan at their meet from Punchestown \ Noel Mullins 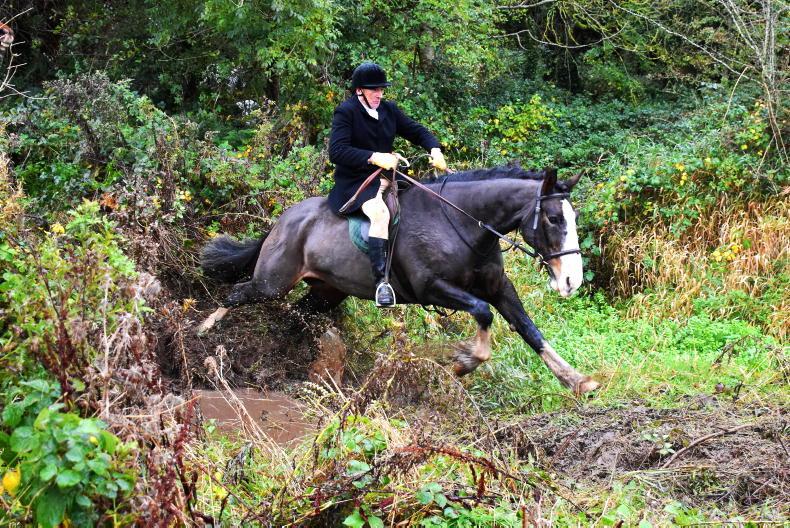 Chairman of The Agricultural Trust, Matt Dempsey sails through a slippery blind ditch while out with the Kildare Foxhounds at Punchestown \ Noel Mullins
Previous Next

DESPITE the almost continuous downpours of torrential rain, the hardy followers of the Kildare Foxhounds turned out in large numbers, the most that I have seen hunting this season.

The meet was in the beautiful surroundings of Punchestown Racecourse that the Kildare Hunt own. It was not the luckiest racecourse for me as a smashing Supreme Leader steeplechaser that I part-owned a few years back injured his tendon on the course on his first outing when going really well.

There wasn’t a sinner at the meet at 10.45am, but within 15 minutes the stable block was heaving with followers where refreshments were being liberally served. Hard working honorary secretary John Dillon is a master of the skill of multitasking, as aside from giving everybody a hearty welcome and making sure that all were served with refreshments, he and honorary treasurer Simon Holohan managed to process hunt waivers, accept subscriptions, and other essential tasks in this era of increasing hunt paperwork.

The hunt has no masters this season and is run by a committee with Charles O’Reilly as chairman. He is a former master of both the Kildares and the West Wicklow Hunt, and the son of a former Kildare chairman Frank O’Reilly. Charles has bred a few talented racehorses in his time with his most recent home-bred Man O Work giving him immense pleasure having already been a winner and placed under the watchful eye of trainer Peter Fahey.

It was the first day for the new huntsman Padhraic Moynihan to officially hunt the pack. Many of the followers were rich in their praise for Padhraic and the sport and fun he and his pack provided on the long dry early mornings of the autumn hunting season.

The job as huntsman of the Kildare Foxhounds is one of the most prestigious in Irish hunting, and demands the talents of a huntsman who is professional with wide experience of hunting hounds, hound breeding and managing a large kennels and an expansive hunt country. Padhraic certainly fits the bill as he has quite a CV having worked with hunts such as the Surrey Union, East Essex & Romney Marsh, Tipperary, United, South Union and the Carlow Farmers. He was hunting 14 ½ couple on the day and they looked fit with wonderful coats and you could see the spring in their step ready for the season ahead.

Padhraic’s partner Rachel Welham, who looks after the hunt horses, cut quite a dash on the smashing six-year-old Irish Draught hunter Ardaneanig Super Nova, by the Galway sire Cappa Casanova, who Padhraic bred himself. He is an imposing horse with size and substance and stands tall. To complete the team are Charlie Vose, a talented young whipper-in, Kieran Peters is the kennel man while Wesley Cole looks after the hunt country.

One of the best tributes I have seen recently to the Traditional Irish Hunting Horse is the short film promoting the Kildare Performance Hunter Show which features Tom Berney (better known for the family Berney Saddlers of Kilcullen), and Hazel Valentine, one of the most talented cross-country riders either astride or side saddle who jumps every type of cross country fence from hedges to ditches. Tom drives through the gaps in a Land Rover to keep up. Tom was hunting the horse that Hazel was riding in the film on the day.

Hunting also were Matt Dempsey, chairman of the Agricultural Trust, and David Mongey of Mongey Communications, who is also chairman of Punchestown, and sponsors the La Touche cross-country race. Helen Keatley, another talented rider, was on a three-year-old, while Joan Mooney, who has been hunting with the Kildares for nearly 50 seasons, was on her sturdy Blueboy. Her daughter Kiera completed the Dublin Marathon and admitted that she was ‘a little tired’ but still had to look after her two young children.

Dara O’Neill, the son of former master Charlie, had his livery clients Pat Murphy, Jack Devlin and Dave Morgan hunting. Also ready for the fray was Richard Wixted, Pamela Braithwaite, Alan McParland and Una and Simon Holohan and their daughter Evie who got her pony ready herself that morning. Others hunting were Martina and Thomas Dempsey, amateur whipper-in Mark Murtagh, who has filled that role with distinction since he was a young teenager, Finn Moore and his pony Indie, Kieran Sweeney, Sheena Boran, James Flood, Andrew Perrin, Sinead O’Connor and Billy Flood, who gave us a blow by blow account of his performance at the Culmullen cross-country charity race.

Tracy Piggott, who rides work in Jessica Harrington’s, was at the meet. Tracy has also made an impressive debut in the ridden horse showing classes this year coming fourth at Dublin and second at Balmoral with her horse Graigueaverne Rose. In the RDS she had a permanent smile while in the ring, and her fan club were there in numbers to support her. Also following were Al Tomkins, Graham Dempsey, former Kildare countryman Ger Barrett and Billy Kelly who whipped-in to the Kildares, show horse and eventer producer Diana Warrington and Carlow Farmers huntsman George Barrett and his daughter Lilly.

It was an action packed day as the huntsman kept the followers and the foxes on the move, and when hounds were on song, they were special to listen to. The plan was to run through de Robeck’s who were masters of the Kildares down the generations. But sometimes things don’t go to plan as the hounds had other ideas and found a customer in the wood and hunted him in a circle crossing the road into a field of beet where they marked him.

The huntsman drew Quinn’s beside Swordlestown Stud and they were on song again running through the long stretch of woodland towards the Kilashee Hotel and back in a circle to Swordlestown and to ground in a ditch.

Drawing David and Hazel Valentine’s hounds found immediately and hunted over the farm where a few banks and particularly a gate caused carnage for the followers as the field continued to deplete but the pack were not distracted and they pushed him back towards the covert where they marked him to ground.

The old railway line held and the pack were on song again, but the huntsman kept one eye on a flock of sheep as he did not want to go near them, and as soon as they marked he moved on again.

Ronan Lalor’s Kennel Wood held a customer who was not inclined to leave and ran for about 30 minutes, dodging the pack and, rather than break cover, found a snug spot underground. The huntsman moved on and found again beside Lalor’s Yard and headed for the Blackhills where they marked him by the road. The last draw was the quarry at the back of the cross-country course, and, although hounds were busy, it was getting towards dusk and as the heavy ground began to tell, the huntsman blew for home.

These Kildare hounds are magic to listen to, and the huntsman has a nice quiet way with them, but he also is a good horseman, a very positive rider, and certainly can entertain followers and above all, his pack of hounds know their job.

Fox hunting in Kildare traces its foundations back to 1766, and in 1793 Squire Connolly of Castletown House is on record as its first master. Its popularity is reflected in its large membership. 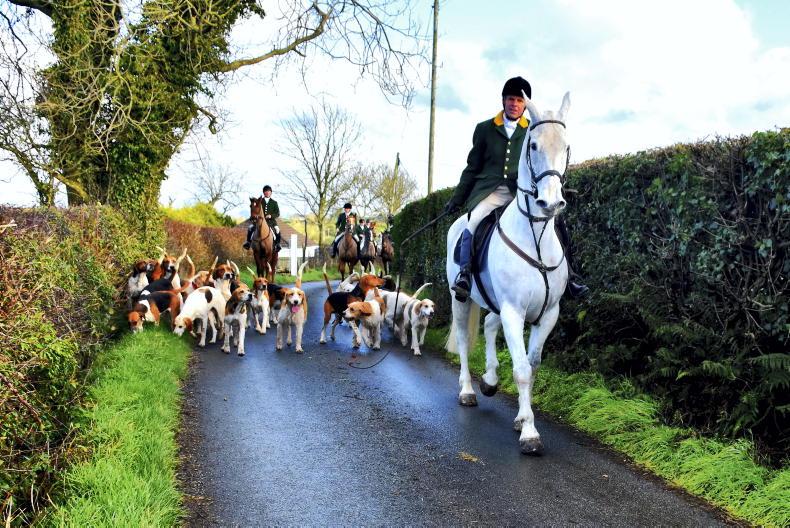 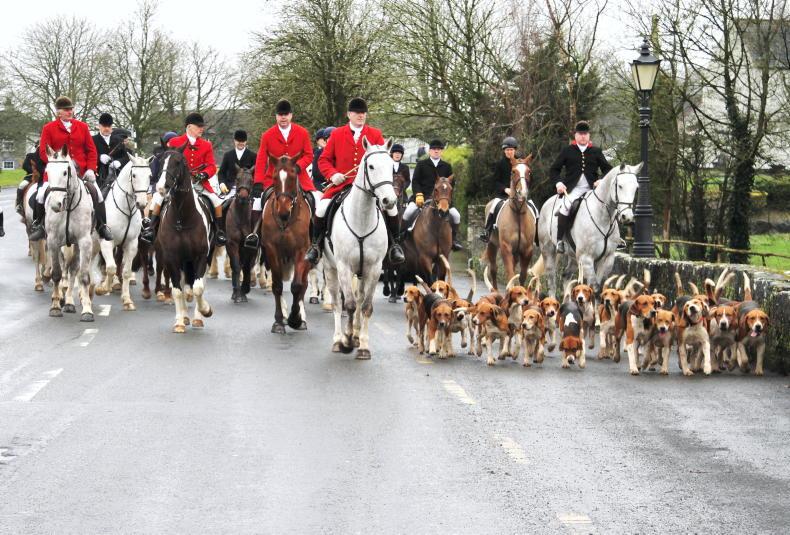 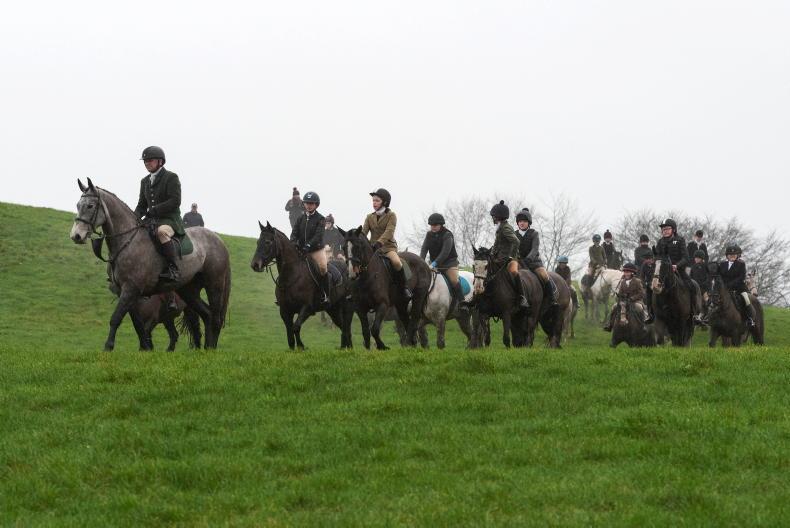 Irish Field Contributor
PICTURE DESK: Out and about
Riders of all ages were out on horses and ponies, great and small, crossing country 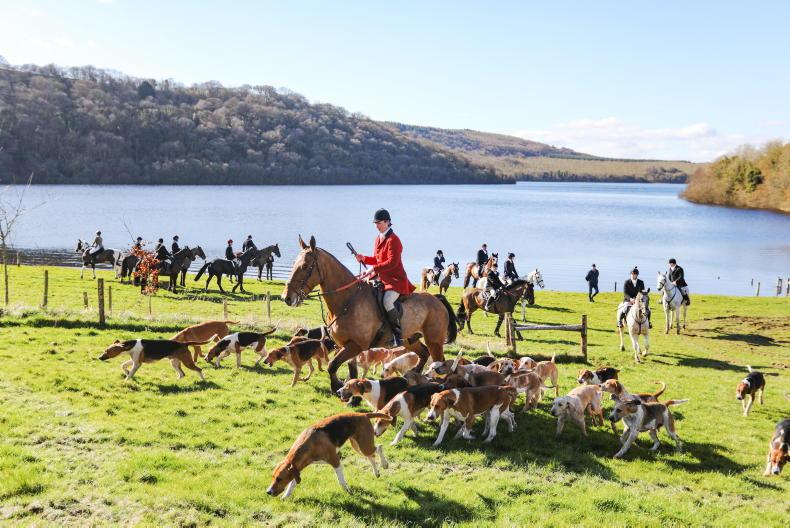 Irish Field Contributor
PICTURE DESK: Out and About
There was plenty of horses and riders out crossing the country this week