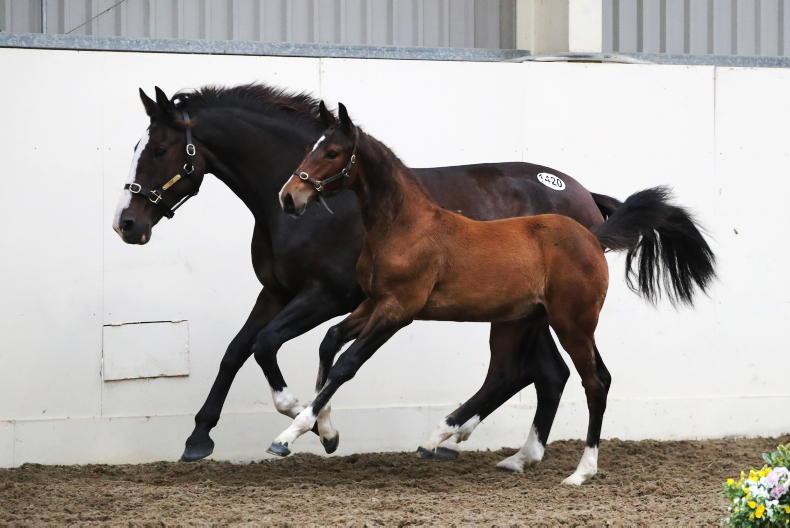 AS breeders of the much-admired Aga Khan Trophy-winning CSF James Kann Cruz, the Connolly family have enjoyed some memorable moments in recent weeks, and celebrations will have continued on Saturday night after their colt foal topped the Goresbridge Supreme sale of show jumping foals at a healthy €26,000.

This was the first of the specialist foal auctions to be staged this year, and with a good clearance of 90% together with an average of €13,330, the figures bode well for the season ahead.

The sale of the colt by Hardrock Z was the highlight of a lively evening’s trade, which saw only one lot of the 11 foals forward realising less than five figures, and 10 change hands. “To sell 10 out of the 11 is good,” commented Martin Donohoe. “There was strong genuine interest throughout, and there were plenty of bidders for all the foals.”

Due to the torrential rain that fell on Barnadown during the afternoon, it was decided to move the sale into the indoor school. This proved not only a sensible move but a good one, as Donohoe explained. “In the end the weather probably did us a favour,” he said. “We were able to show the foals to their best advantage, and it’s something we may look at in the future.”

As one of the obvious catalogue picks, the sale-topping CSF Clover Rock certainly boasted the most topical pedigree. By Hardrock Z, he is out of a sibling to CSF Telly Cruz, who in is the dam of James Kann Cruz, as well as to CSF Vinze (1.50m) and CSF Kancruz (1.45).

“It was a great price, and if we could sell them all at that figure, wouldn’t it be grand?” commented Patrick Connolly afterwards. “I’m delighted to see him go to a home where he will be produced to the full.”

The Tuam-based family have used the sire Hardrock Z for the past few years, buying the semen through Olive and Ivor Broderick, and citing his ability to produce athletes as one of the attractions. This year however, Connolly has covered this colt’s dam with Dorian Grey TNZ, a son of Dominator Z who stands with Team Nihof.

Signing the docket for this exciting individual was Barry O’Connor, acting on behalf of Conall and Niamh Murray from Mannon Farm in Co Down. Involved at the very top of the sport, the Murray family own the Aga Khan-winning hero Count Me In, and have several others with Conor Swail as well.

Another to feature prominently among the sale-toppers, at €16,000, was the Greenacres Stud’s colt by Pegase Van’t Ruytershof. Also with a prominent blacktype pedigree, this colt is out of Lux Like Royale, who is a full-sister to the Australian ridden LCC Lux Like Cavalier (1.60m) and from the immediate family of Mr Rockefeller (1.55m).

Regular buyer Shane Kenny from Co Wexford was on site to account for this one, who came on the market at €15,000.

Two lots later Andries de Bont’s eye-catching colt by Cornet Obolensky out of Java (I’m Special de Muze) achieved the same return. This grey colt was the sole offering in the catalogue by Cornet Obolensky and, out of Vamp (1.40m), is from the family of the former home-based performer Fellow Castlefield (1.60m).

Welsh customer and sport horse buyer Tom Browning bid remotely for this well-bred individual, commenting afterwards: “I like the sire who I have been lucky with in the past, and thought the mare’s line was very good.”

Browning is better known for buying horses under saddle.

“I will always buy a nice foal, and this will be reared and produced alongside another I’ve bought as well as the four I have bred,” he added.

Realising the next top price at €13,500 was the later sale of Greenacres Stud’s colt by Emerald Van’t Ruytershof out of Greenacres Quality, by OBOS Quality.

A sibling to a former HSI foal champion, and bearing a very similar maternal line to the stud’s other offering (by Emerald), this colt was initially led out unsold, before finally being secured by Fergus Lawlor, from Stradbally in Co Laois.

A businessman and amateur show jumper, Lawlor also snapped up the final lot to sell, which at €12,000 went to Jenny McCann’s Libella, who was also the top-priced filly.

Carrying contemporary breeding, Libella is a half-sister to the Dutch-based jumper Bengel SFN (1.50m), while the dam is also a sibling to several graded horses and from the line of Alanca Z (1.45m) as well as Calanca (1.45m).

“I thought they were both nice movers, had good pages and just liked them,” said Lawlor. “We will store them on and see what they are like as three-year-olds.”

He is already a sibling to the Italian-based Gomes 3 (1.60m) and looked very well bought by Olga Doyle of Equine Evolve. “I bought him for my own company as an investment,” explained Tipperary-based Doyle.” The foal caught my eye, and I liked the dam’s line.”

Bids were competitive throughout the session, especially for Ballyvarogue Stables’ Ballyv Ivy, who was eventually knocked down to the Ennis-based Williams Sport Horses for €11,500.