Title: INTERNATIONAL: Dujardin and Gio do the double in London 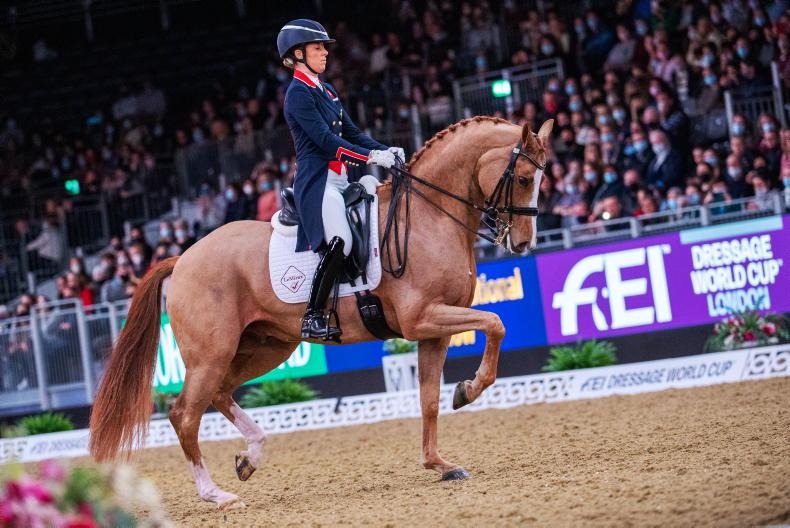 BRITAIN’s most decorated female Olympic athlete gave her home crowd a reason to cheer last weekend’s London International Horse Show when she stormed to victory in both the Grand Prix and the FEI Dressage World Cup with two personal best scored aboard her Tokyo Olympic Games medallist, the brilliant little gelding Gio.

The horse was sold following the pair’s spectacular summer of success that included taking team and individual bronze at the Olympic Games in July and team silver and Freestyle bronze at the FEI Dressage European Championships in September, but were reunited for one final performance together at their home fixture this week.

And the crowd were treated to an exhibition of precision and partnership that earned a personal-best Freestyle score of 89.04% which was almost eight marks clear of second placed Charlotte Fry, Dujardin’s Tokyo teammate, who rode Dark Legend. Germany’ Frederic Wandres and Duke of Britain slotted into third.

Wandres, who rides for Hof Kasselmann in Hagen where the 2021 European Championships were staged, was the first to score over 80 percent (80.26%) and that mark could have been higher but for a mistake in the two-tempi changes.

Fourth-last to go, Denmark’s Nanna Skodborg Merrald and Atterupgaards Orthilia followed him into the ring and looked set to pose a strong challenge, but the pair who were members of the Danish European bronze medal-winning team were eliminated at the very end of their test for blood in the mare’s mouth.

Britain’s Fry was next in and raised the bar with a fabulous performance from Dark Legend, the 13-year-old gelding with which she won the European U25 Championship title back in 2018. It has been a dream year for this 25-year-old rider who, with the 12-year-old stallion Everdale, competed alongside Dujardin on the British teams in Tokyo and Hagen, and tonight Dark Legend showed he wasn’t to be outdone when moving to the top of the scoreboard with a score of 81.94% and just two left to go.

When the penultimate British duo, Richard Davison and Bubblingh, put 76.91% on the board then it was all eyes on Dujardin and Gio who were always expected to make a big impact, and they didn’t disappoint. The little chesnut horse seems to take everything in his stride, and although still a relatively unexposed 10-year-old, he continues to grow in confidence and ability.

In Tokyo he earned a mark of 88.51 for Olympic Freestyle bronze, here he bettered that by more than half a percentage point with a score of 89.04% that included 10 maximum scores of 10 and multiples of 9s and 9.5s while Dujardin gave another of her masterclasses of riding.

“What a perfect Christmas present! He truly is a very special horse. This year he did his very first Olympics, his very first Europeans and now he’s just finished off by winning the World Cup here at the London International Horse Show. What a legend!” Dujardin commented afterwards, adding that it was the gelding’s first indoor show and first time experiencing that sort of atmosphere.

“He has come on so much and so quickly this season, and finishing the year with two personal bests here in the Short Grand Prix yesterday and the Freestyle tonight is amazing. He has shown what a great horse he really is,” she added.

However he’ll be going back to his new owner, British junior rider Annabella Pidgley, now and she is not sure what the plan is next. Dujardin said the new partnership is “magical to watch - she (Annabella) is an amazing up-and-coming rider, so next year is going to be very exciting.”

Meanwhile, Fry said she also really enjoyed performing in front of the London crowd tonight. “It was incredible - even before you ride your test, the crowed is cheering for you. It’s a wonderful feeling and I don’t think the year could have ended up any better,” said the Dutch-based rider.

Denmark’s Nanna Skodborg Merrald finished third with Atterupgaards Orthilia (75.10%). The pair were dramatically eliminated in Friday’s World Cup when blood was found on the mouth of the 16-year-old mare.