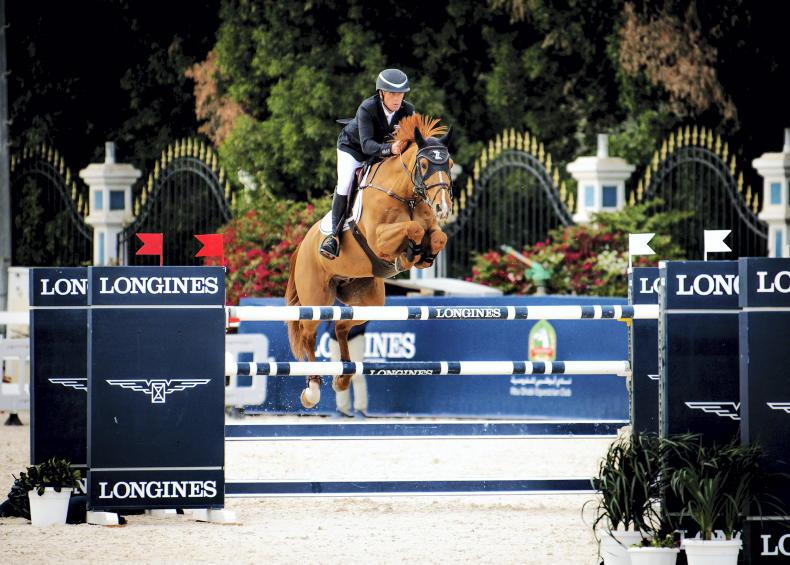 SHANE Breen opened his 2022 season in spectacular style to win the first five-star Grand Prix of the year last Friday with Z7 Ipswich, before helping the Irish team win the first CSIO5* Nations Cup of the season at The President of the UAE Showjumping Cup in Abu Dhabi, UAE.

Some 36 combinations started over Alan Wade’s 1.60m track at the beautiful venue, and with just 25% allowed into the second round, Belgium’s Constant van Paesschen was unlucky to miss out as the slowest clear in 10th place.

The only Irish representative in the Grand Prix, with Ireland’s other three riders opting to save their horses for Sunday’s Nations Cup, Breen was the second fastest in the first round and therefore was the penultimate rider into the arena.

The target was set at 37.12 seconds by Saudi Arabia’s Abdullah Alsharbatly and Breen used his 14-year-old gelding’s natural speed across the ground to his advantage and he broke the beam in 36.68 seconds to go straight to the top of the leaderboard.

The in-form Swede Henrik von Eckermann was last to go with Glamour Girl and he posted a faster time, but four faults at the penultimate jump meant he had to settle for fourth place. Breen and the Team Z7-owned Carembar de Muze gelding, who won the last renewal of the Dublin Grand Prix in 2019, earned €37,500 in victory.

Breen praised his good friend Alan Wade’s course building saying “he is one of the best course builders in the world. It was technical but smooth and he got an excellent result in the end.”

To World of Showjumping, Breen commented: “The jump-off course was nice and flowing. I was second last to go with Alsharbatly in the lead as I entered and Henrik von Eckermann coming in last. I am aware of how naturally quick Ipswich is, so I thought I’ll do my round, hopefully it will be good enough to go into the lead and then I would be there to be shot at by Henrik.

“He was quicker in the end but got unlucky on the second last jump. It was my day today and I don’t feel back for beating him! He had such a good season last year. I am very lucky to have Ipswich, he is 14 now and has gone from strength to strength.”

From 50 starters over the track, just six managed to progress to the second round, where Trevor was the faster of two clear rounds in 40.33 seconds to earn €7,700.

For the home nation, Omar Abdul Aziz Al Marzooqi took the runner-up spot with Concordia in 41.02 seconds, while Italy’s Simone Coata slotted into third with Dalphons V after picking up a time fault against the clock.