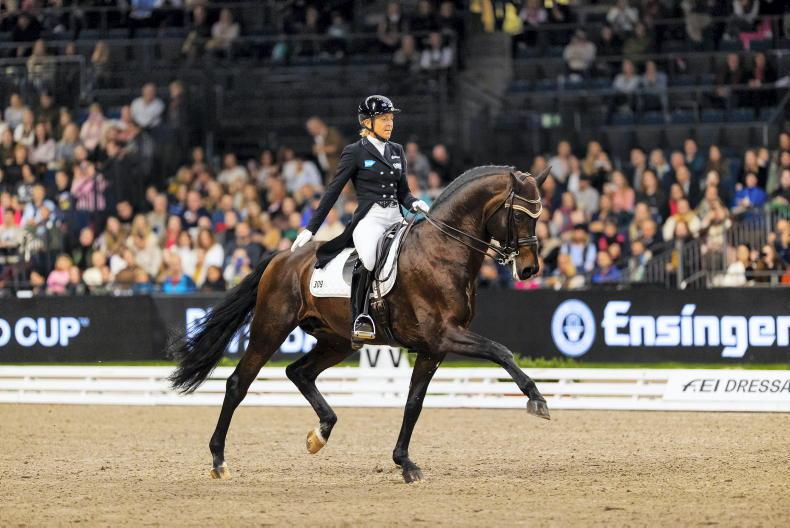 CORK’s Robert Splaine won a three-star 1.40m in Oliva, Spain last Saturday. Riding his own and Michael Charles Kovanda’s 10-year-old gelding Cambridge (by Cloney), he was the best of 19 clear rounds in the 50-starter one-round Table A, breaking the beams in 59.78 seconds. Mayo’s Cameron Hanley was third with Dave Quigley’s eight-year-old gelding Fifty Shades of Grey (0/ 63.01), while splitting the Irishmen in second was France Alexa Ferrer with Night Girl BD Heffinck (0/ 60.55).

Splaine and Cambridge were then fourth in Sunday’s 1.45m Table A. From 89 starters, just 12 managed a clear round and Splaine broke the beams in 69.69 seconds to earn €2,600. Victory went to Belgium’s Jérôme Guery with Kannabis van de Bucxtale (0/ 66.27). Just sneaking into the top 10 was Shane O’Meara when clear in 76.15 with Harvard, a 10-year-old gelding owned by Manton Grange Stables. Donegal’s Kenneth Graham was runner-up in a 1.30m aboard his own 12-year-old ISH mare Beir Bua (Lancelot x Cruising), bred by Harold McGahern.

BERTRAM Allen won a two-star 1.40m in Kronenberg, The Netherlands last Saturday. Riding the eight-year-old mare Jelvinia MB, owned by Ballywalter Stables and Maximillian Lill, he was the fastest of 30 double clear in the two-phase class from a startlist of 71. It was a first outing for the combination. Allen finished second in the same day’s 1.45m jump-off class aboard Caprisco when producing one of five clears against the clock in 33.67. victory went to The Netherlands’ Man Thijssen with Charlie (0/0 33.30).

Anna Duff was busy in the one-star young horse classes at the venue, finishing third and second with the seven-year-old gelding BEC Infrared. Home-bred by her father Brian, the chesnut is by Diamant de Semilly out of Drumagoland Girl (Luidam).

EVENTING legend Ingrid Klimke won the third leg of the FEI Dressage World Cup in Stuttgart last weekend. Best known as a five-time Olympian and multiple championship medallist in the sport of eventing, the 54-year-old athlete who competes in all three equestrian Olympic disciplines demonstrated her exceptional talent when pinning her compatriot and five-time FEI Dressage World Cup champion, Isabell Werth into second place. Riding the 14-year-old stallion Franziskus FRH, she got the top score of 83.440%.

“I drove here with no expectations, I would have been happy being fifth! I have done lots of other wonderful things but competing indoors is different and I like it a lot. When I was younger I watched my father doing it and tonight brought memories of him back for me. This was very special night,” Klimke commented afterwards.