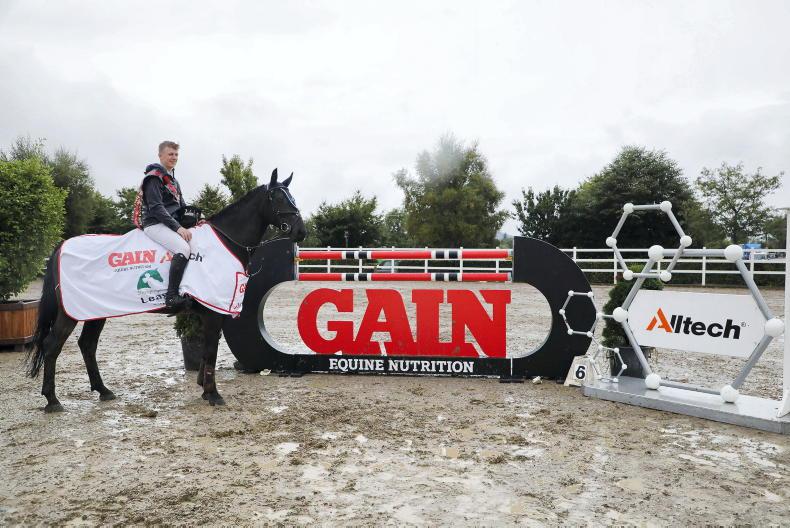 THE Gain Equine Nutrition/Alltech Ireland National Grand Prix came to an exciting conclusion at the Irish Breeders’ Classic, taking centre stage on Saturday afternoon. The final round, which saw 30 combinations battle it out, was jointly sponsored by Fernhill Sporthorses and Francis Derwin International.

Going into the final, the overall title was all to play for, with Jonathan Smyth and Mulvin Lights Out having a six-point advantage (46) over Francis Derwin and Killerisk Can Ya (40) and Luke Campbell and Derryinver Truffle on 37 points.

In the end, Smyth (Mulvin Lights Out) took the Gain/Alltech National Grand Prix title after they secured the runner-up spot in the final round to see off the challenge of his closest rival, Derwin (Killerisk Can Ya), who failed to feature in this line-up. Campbell and Derryiver Truffle also failed to book his place against the clock and finished on his tally of 37 points.

As winner of the Gain/Alltech League, Smyth took home the overall prize fund of €3,000 and Derwin the runner-up prize of €2,000, while Campbell took third place in the league and €1,000.

Smyth and Mulvin Lights Out got their season off to a good start and were consistent throughout the league. They finished fourth in the opening round at The Meadows and following this, they clocked up points in six other rounds, which included a win at Ard Chuain. Derwin (Killerisk Can Ya) collected points in five of the rounds, which included two wins, one in Galway and the second at Cavan.

Claiming the final round was RDS young rider champion Lee Carey and Kan Cruise, fastest of just three double clear rounds. Owned by Leo Carey and bred by John Carey, the nine-year-old is by Kannan out of the Cruising-sired Ms Cruise.

From the original starters, six combinations proceeded to the second round.

Although Emma McEntee delivered a clear first time out with Cnoc Rua Chinook, she withdrew and did not contest the jump-off. All three combinations in contention for the title had declared to jump, but only Smyth and Mulvin Lights Out booked a place against the clock.

First to go Smyth and Mulvin Lights Out set the bar high when they delivered a clear in 41.76 to take the lead. The 10-year-old gelding was bought by Smyth’s father in Goresbridge and he is now co-owned by the Smyths and Roy Craig. He is by Kroongraaf out of the Diamond Serpent-sired Diamond Vicky.

No stranger to success in Barnadown, Kevin Gallagher and BP Hybernia did not change the standings and a pole on the ground at the third oxer in 43.22 saw him fill fifth place. Owned by GBBS Int LTD and bred by Dr Noel Cawley, the 12-year-old gelding is by Flexible out of Ballinakill Clover (by Clover Hill).

Next to go, Carey wasted no time with Kan Cruise and a series of tight lines saw him set the winning clear in 38.26 and demote Smyth into second place.

Young rider Luisa Horta Osorio opted for the longer routes with the Daniel McAlinden-owned Jasmin da Hermida, and it paid off as they came home clear (45.38) which saw them finish in third place. The eight-year-old mare is by Milton Du Murier out of the Papillon Rouge-sired Mathilde Hayettes. This combination took fourth place in the round at Mullingar.

Daniel McAlinden slotted into fourth place with his own AHG Whiterock Doctor Cruise when fastest of the four-faulters after faulting at the first part of the double, crossing the line in 38.09. Owned by McAlinden, the nine-year-old mare was bred by Ann Gannon Clancy and is by Indoctro out of Miss Whiterock Cruise.

Jonathan Smyth took another place in the line-up when he finished on eight faults with Crystal Graf in 41.97 for sixth place. Owned by Ann Doherty and bred by her late husband Anthony Doherty, the 11-year-old gelding is by Lux Z out of the Graf Magna-sired Lady Graf. 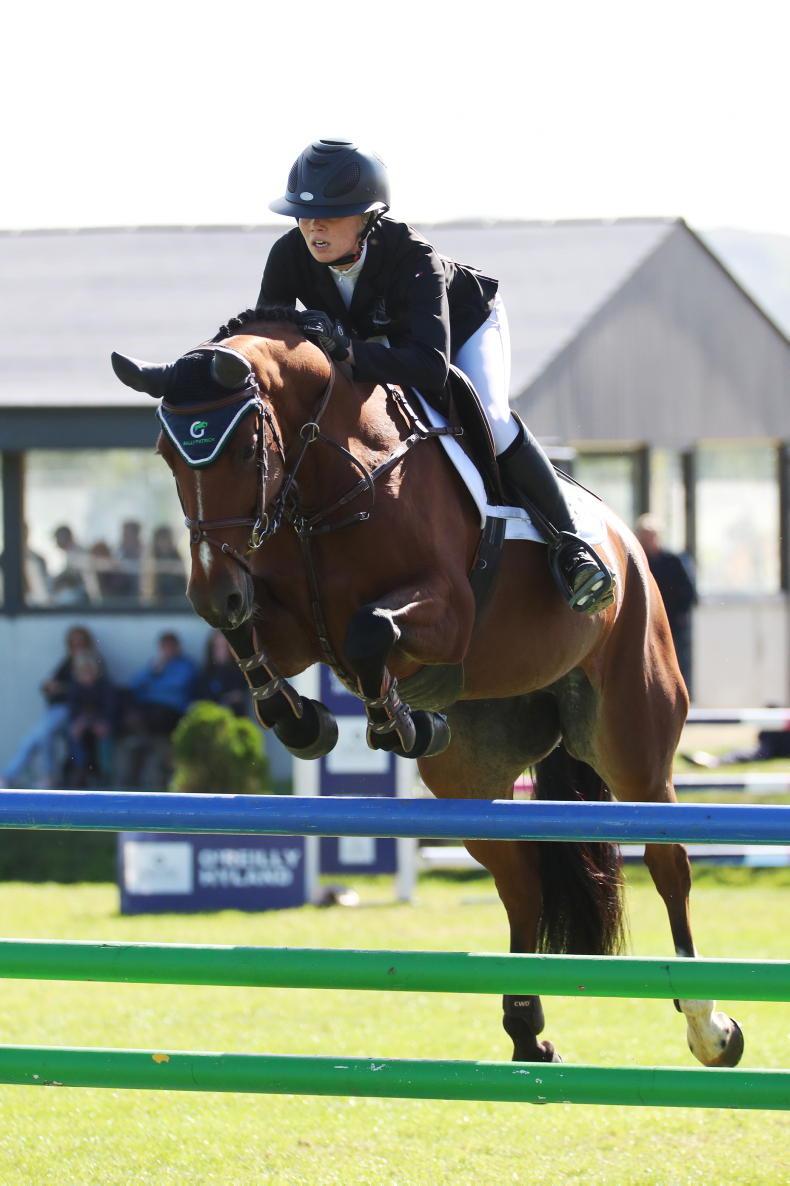 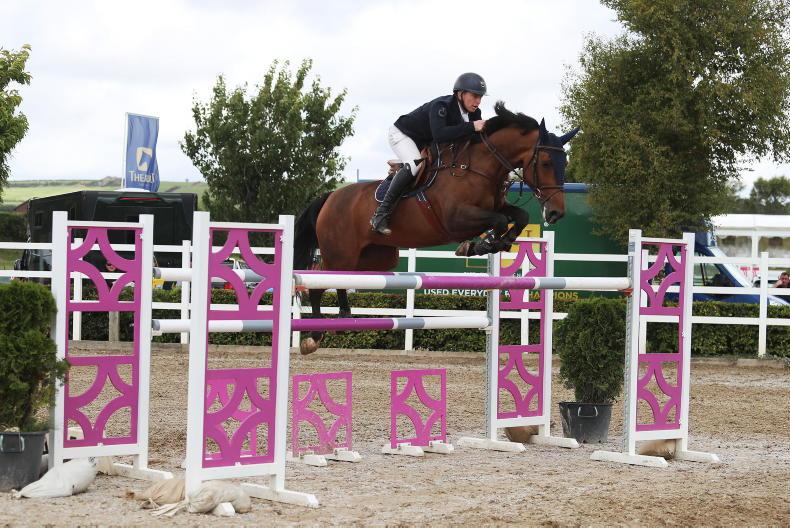 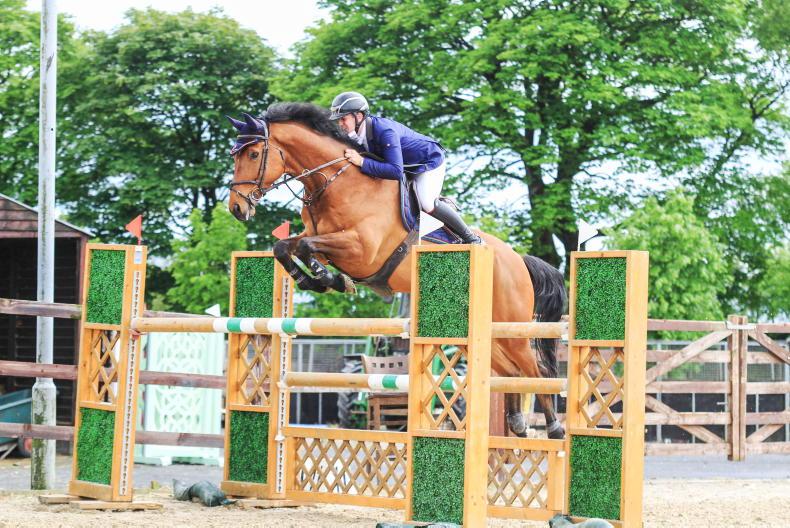 Emer Bermingham
SHOW JUMPING: Smyth is 'king of the castle'
Jonathan Smyth proved the one to beat with wins and top placings under his belt at Castle Irvine, Necarne 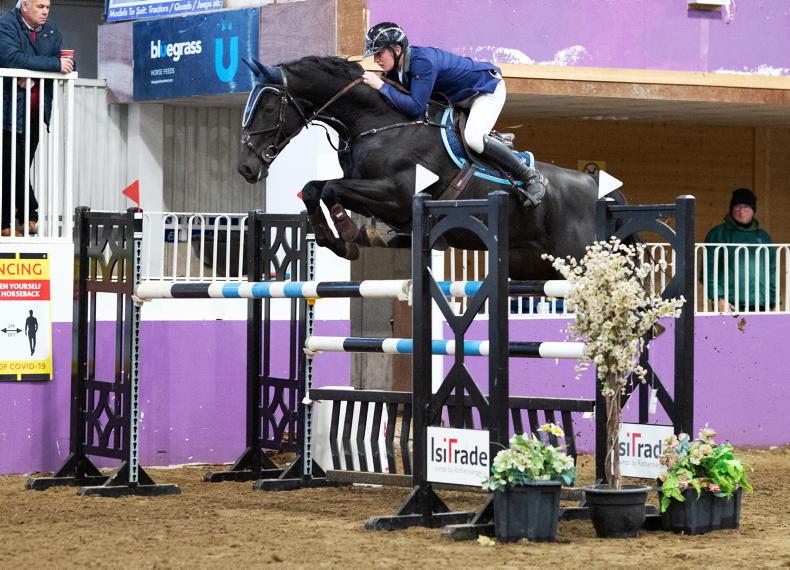