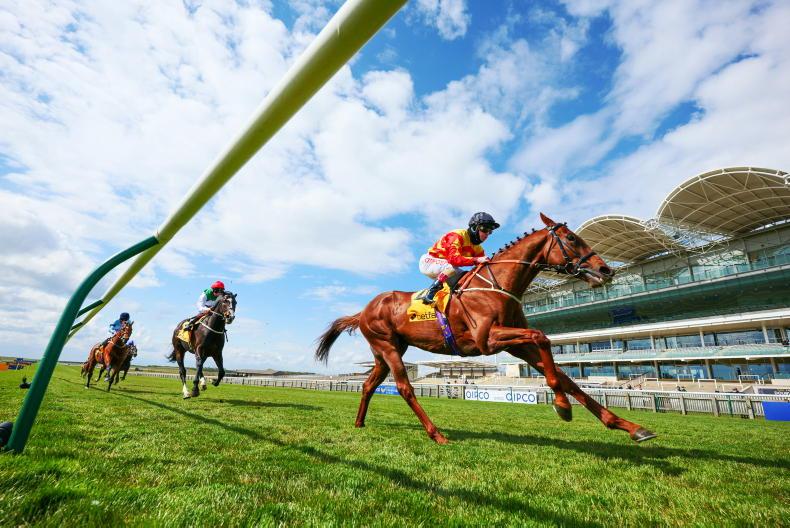 THE controversial ban on Irish-trained horses running in low-grade handicaps in Britain is to be lifted from the start of 2023.

This was one of the measures announced on Wednesday by the British Horseracing Authority aimed at improving the competitiveness of British racing.

No overseas runners were allowed run in British races when racing resumed in June 2020 following a Covid-enforced suspension. This ban was lifted within days for Royal Ascot and other high quality races but it has remained in place for low-grade races, much to the annoyance of some Irish trainers and British racecourses which have traditionally welcomed Irish runners boosting field sizes.

Following months of small-field races in Britain this year, the BHA has decided to again open all races to overseas runners, "except during those times of the year where there are insufficient opportunities for British-trained runners, specifically on the flat from September 1st to December 31st."

BHA handicappers will also have the right to refuse to issue a handicap mark to "horses for which they have concerns about the likely accuracy of any assessment."

Announcing the measures, the BHA said it was agreed in September by the Industry Strategy Group that immediate adjustments were required to drive increased competitiveness in 2023 and there will be an introduction of more strategic changes to the sport, including the fixture list, from 2024 onwards.

On the flat, the maximum number of programmed races for meetings in July and August will be reduced from an average of 6.5 to six at all meetings at which total prize-money does not exceed £200,000, a move that will remove approximately 120 races across the period.

To mitigate the financial impact of this development, all-weather meetings will be permitted to programme eight races in October and November, with the option to divide to nine.

Over jumps, in July and August the maximum number of programmed races for fixtures with prize-money not exceeding £200,000 will be reduced from seven to six, and in September from an average of 6.5 to six. This will lead to the reduction of approximately 50 races across the period.

The financial impact of this will be partially mitigated by increasing the number of programmed races from 6.5 to seven in October and November, when field sizes are generally larger and races more competitive.

A number of alterations to the race programme have been agreed on the flat and over jumps.

On the flat, measures include:

• Better aligning the programme to the current horse population, which will involve altering approximately 10-12% of Class 2 and 3 handicaps across the year;

• Removing the worst performing conditions stakes from the programme;

• Subject to a review of two-year-old numbers in early 2023, realigning the programme of nursery handicaps to better fit the requirements of the horse population, as well as reducing the number of such races in July and August by 10-12%.

Over jumps, measures include:

• Removing the weight-for-age novices’ chase programme from May to August, replacing those races with a programme of Class 3 novices’ limited handicap chases;

• Reducing the number of Class 3 novices’ limited handicap chases by 10-15%, ensuring a regional programme at each distance remains year-round;

• Realigning the programme of handicap chases to better fit the current horse population, impacting approximately 10% of Class 3 and 4 handicap chases.

As well as the above, a small number of other tactical interventions have been agreed to help boost competitiveness.

Overseas-trained runners will be able to participate in low-grade handicaps, except during those times of the year where there are insufficient opportunities for British-trained runners, specifically on the flat from September 1st to December 31st. This change will come into effect from the beginning of 2023.

To protect the competitiveness of such races, handicappers will be asked to withhold a handicap rating from horses for which they have concerns about the likely accuracy of any assessment.

The BHA is also working with the respective Pattern Committees to review the Pattern and listed race programmes for both flat and jump racing. Building on the work of the Quality Jump Racing Review Group, discussions will continue with racecourses to work towards a package of measures in time for the 2023/24 season, to be announced early in 2023.

On the flat, discussions with racecourses are ongoing with a view to strengthen, refine and consolidate the blacktype programme. This is part of a two-year plan with the intention being to effect a reduction in the number of flat blacktype races in 2023, alongside setting a broader vision for 2024 of more significant change.

Richard Wayman, chief operating officer of the BHA, said: “There was agreement across our industry that while a more strategic approach is required to secure a vibrant future for racing, action was needed more immediately to address issues around the competitiveness of the sport we are presenting to the public.

“It is pleasing that agreement has been reached quickly on this package of measures which will drive improvements in competitiveness next year. We can now focus slightly further ahead and seek to develop and introduce more fundamental changes to grow the appeal of racing to fans and customers in 2024 and beyond.”

Charlie Liverton, CEO of the Racehorse Owners Association, said: “British racing continues to recognise the challenges it faces. The package announced today is a short-term tactical plan which we hope will increase the competitiveness of British racing. Conversations continue on the longer-term strategy for the sport.

“Racing’s participants have been voicing their frustration regarding the race programming and the side-effects of the current structure for some time. I am pleased that this has been recognised and moreover, working with the BHA and racecourses, has helped shape a workable solution. This is an important marker that the industry is moving in the right-direction, and we can now turn our attention to long-term strategy planning.”

David Armstrong, chief executive of the Racecourse Association, said: “Following on from the two-day strategy meeting in London, it is very encouraging to see the sport come together and make some meaningful changes for the 2023 calendar. Whilst the core of the strategy output will be delivered in 2024, the RCA and its Members are fully supportive of these short term interventions, which will definitely improve competitiveness in the short term.”