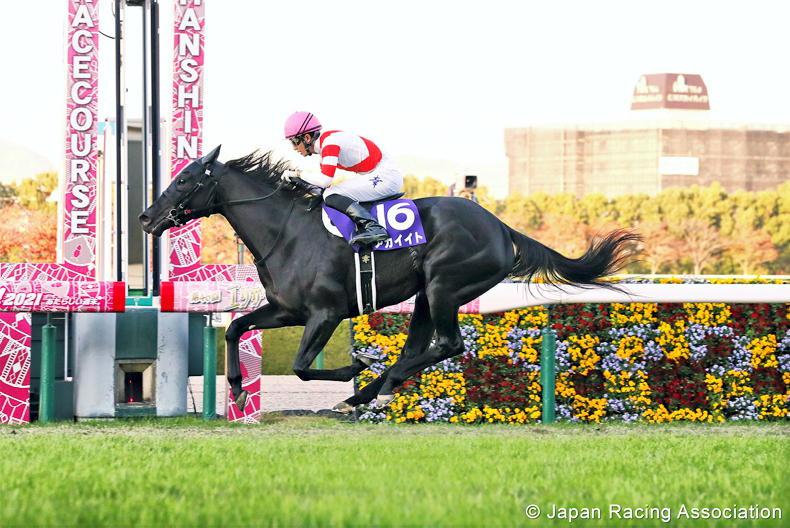 AKAI Ito produced a surprise victory in this year’s Group 1 Queen Elizabeth II Cup to score her first graded success and became the first progeny of Kizuna to capture a Japanese Group 1.

The filly had stepped up to open company after two wins out of five starts in the first half of this season but came here off a seventh place in the Group 2 Fuchu Himba Stakes in October.

Missing her break from stall 16, the four-year-old Akai Ito and jockey Hideaki Miyuki travelled fifth from last before making a move turning the last two bends to be third into the straight.

She accelerated powerfully in the straight, catching the favourite Lei Papale passing the furlong pole, and easily held off the rest of the field with her late drive, the fastest last three furlongs in the field for a two-length victory.

“I tried to race her in her own rhythm. Though I could not break her smoothly out of the gate, I was able to eventually race her in the intended position at the backstretch. I was confident that she will stretch well at the end and, because it was a Group 1 race, I made bid earlier than usual. We were able to take the front earlier than I had expected and, as there was no horse right behind us, I just kept on urging her to go until,” commented Hideaki Miyuki.

Stellaria, another Kizuna filly, came the widest of the field to chase the leaders in the straight and produced a great turn of speed in the last 100 metres to cross the line in second with Clavel closing in on Stellaria but was neck short in third.

The favourite Lei Papale lost momentum in the last 200 meters to end up sixth.