Always a highlight of the third day of the Tattersalls December Mare Sale, Juddmonte's 2017 consignment featured seven of the top 10 lots for the session 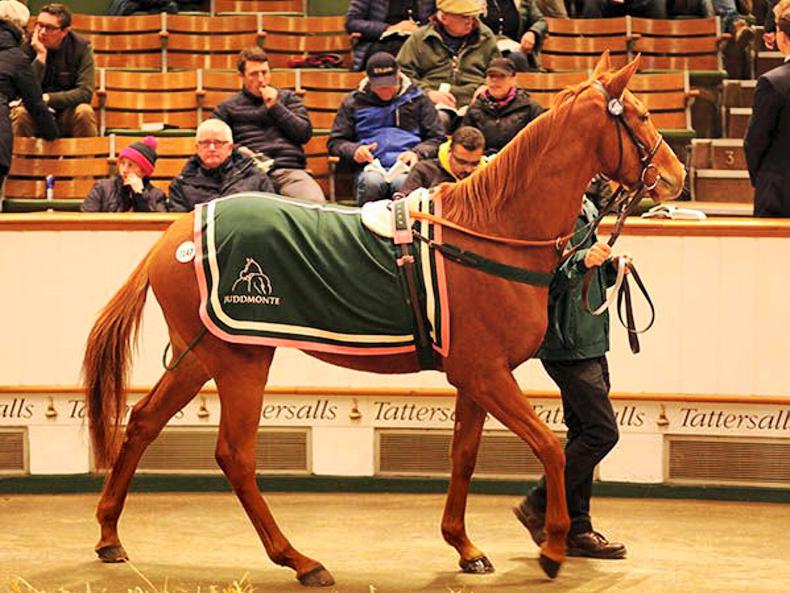 Lot 2147, Presiding Officer, topped the third day of the Tattersalls December Mare Sale. Knocked down to James Delahooke for 325,000gns, she was one of seven members of the Juddmonte Farms draft to make the top 10 prices for the session PHOTO: tattersalls.com

THE third day of the Tattersalls December Mare Sale continued strongly and seven members of the always popular Juddmonte Farms draft featured in the top 10 lots of the session.

The Juddmonte draft is always a highlight on the third day of this sale and this year proved no different with the 30 fillies offered selling for 2,382,800 guineas.

They included seven of the day's top 10 lots, including Presiding Officer who was knocked down to James Delahooke, on behalf of US-based Pursuit of Success LLC, for a session-topping 325,000 guineas.

The well-related three-year-old daughter of Beat Hollow is an own sister to Group 1 Prix Marcel Boussac winner Proportional as well as to Group 3 Park Express Stakes winner Vote Often.

Proportional is also notable as the dam of the listed winner Variable and of the Dermot Weld-trained two-year-old Contingent, a son of Frankel and an impressive winner of his only start since the catalogue was printed.

"We are hoping that Contingent comes out and is successful next year, that's the hope," said Delahooke. "This filly will probably stay in Europe."

Another eye-catching filly from the Juddmonte Farms draft was Media Mischief, who was purchased by Reiley McDonald, signing under Mercer Bloodstock, for 250,000 guineas.

The three-year-old daughter of Kentucky-based sire Into Mischief is out of the Grade 2 Buena Vista Stakes winner Media Nox and is a half-sister to Nebraska Tornado, winner of both the Group 1 Prix de Diane and the Group 1 Prix du Moulin de Longchamp.

McDonald commented after the sale: "She is very pretty mare, I'll take her back to the US, breed her well and hope to get some runners! I don't have any breeding plans yet, but she has a very American page. I think she was good value."

Quebee, the listed-winning daughter of Sir Percy, was the third highest priced lot, making 200,000 guineas when knocked down to Suzanne Roberts, who was standing with John and Peter Fagan of Deerpark Stud.

The Clive Cox-trained filly won four times as a three-year-old, including the Listed Fortune Stakes at Sandown, and hails from the family of Group 1 Prix Jean-Luc Lagardere winner and classic sire Wootton Bassett.

"The filly had ability, but picked up a little injury after her listed win and was never quite back to herself,” said Roberts. “She has a great outcross pedigree and could visit any stallion. We have not got anything in mind yet, we'll sit and deliberate."

Peter Fagan of Deerpark, who enjoyed a successful December Foal Sale – selling their Golden Horn colt out of Elegant Shadow for 325,000 guineas – added: “We are looking to buy nice mares."

The Juddmonte draft was responsible for nine of the 16 lots which realised 100,000 guineas or more and included two three-year-old daughters of Frankel – Elphin and Frima – who both sold for 180,000 guineas.

Frima, a half-sister to Australian Group 3 winner Jet Away, hails from the family of blue hen mare Hasili and was purchased by Dermot Farrington and Paul Makin’s Makin Stallions.

The buying combination bought five lots for a total of 345,000 guineas from the Juddmonte draft and Makin explained: "They are all bought for Marcel, but Dermot and I might chat tomorrow and divert one or two to Aclaim.”

John Clarke purchased the second daughter of Frankel to make 180,000 guineas and she, Elphin, is a half-sister to Group 1 Matron Stakes winner Emulous.

"Ownership plans for her have not yet been decided, but she will be retired and will go to Ireland," said Clarke. "She is a lovely mare with a fabulous page and with plenty to run for her."

The Tattersalls December Mare Sale continues at 9.30am on Thursday, December 7th.