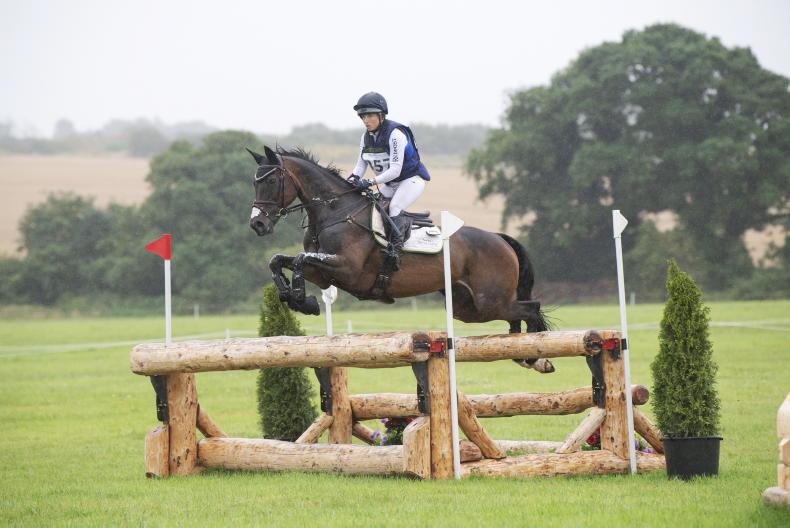 BRITAIN’s Kirsty Chabert had hoped to make her Semalease Kilguilkey House debut at the beginning of July but, following the event’s cancellation, she headed to the substitute fixture at Ballindenisk where she won the CCI3*-S on her only ride, Opposition Aphrodite.

Last week, the Team Opposition truck finally drove into Kilguilkey with five horses on board, two of whom won their respective classes while another pair finished in the top 10.

Disappointingly, Opposition Aphrodite, one of three rides for Chabert in the Global Event Horses CCI4*-S, incurred 20 jumping penalties across the country and, with a lot of time penalties, dropped out of contention.

Chabert finished seventh on the 10-year-old Fleetwater Opposition mare Opposition Heraldik Girl, whose total of 43.5 included 9.2 cross-country time penalties, while she topped the final leaderboard, on her flatwork mark, with Classic VI (27.8) on whom she won a similar class at Millstreet earlier in the year.

The only other rider to go double clear inside the time was Co Down’s Joseph Murphy who finished second with Calmaro (30.5) on whom he was fourth last time out in the CCIO4*-S at Aachen and ninth earlier in the season in the CCI5*-L at Lexington.

With 5.2 time penalties across the country, New Zealand’s Sam Lissington was third on Ricker Ridge Ricochet (33.9) while she was fifth with Bing Bong who was awarded a dressage score of 29.4 by the ground jury of Ireland’s Faith Ponsonby (C) and France’s Eric Libby but had a fence down show jumping and picked up 3.6 time penalties on the final leg for a total of 37.

Ireland’s Alison Holden led after dressage on O My Balladeer (26.3) but left two poles on the ground and with 13.2 cross-country time penalties dropped to 10th.

Hillsborough’s Clare Abbott had mixed luck, placing fourth with Sarah Riley’s DHI No Fear, whose completion score of 34.6, on his debut at this level, included six cross-country time penalties, but being eliminated for leaving out a cross-country fence with her own Mr Mighty who, following the first two phases, was well-placed on 30.1. Four other Northern Region riders were eliminated on this phase, three being unseated.

Wiltshire-based Chabert brought her double up in the Module CCI2*-S where she completed on her dressage score with the Dutch Warmblood mare Hanerina SSF (25.4) who ran at the two Ballindenisk internationals this year when ridden by Hong Kong’s Nicole Pearson.

While the ground jury of France’s Eric Lieby and Ireland’s Paula Geiger did award one combination a score of 42.1 and another 40, there was some very tight scoring among the majority of the 48-runner field and any errors in the jumping phases proved very costly; even time penalties had a major effect.

All but one of the top 13 combinations on the final leaderboard completed on their first phase scores, the odd one out being the USA’s Cornelia Dorr and DHI Qyaracolle Z who failed to follow up on their CCIYH2*-S win at Millstreet this year when picking up 1.6 cross-country time penalties for a completion score of 26.5 in fourth place.

Waterford’s Meabh Bolger filled the runner-up slot with the highly consistent MBF Back To Back (25.9), her six-year-old Metropole gelding who won the CCI2*-S at the second of the Ballindenisk internationals, while Co Meath’s Sarah Ennis recorded her highest-placed result of the weekend when third on the home-bred Caricello gelding Stellor Deelite (26.3), another six-year-old.

Hong Kong’s Yu Xuan Su led after dressage on All Or Nothing II (24.4) but, with problems on both jumping phases, finished last of the 45 to complete when amassing a further 100 penalties.

“I wasn’t necessarily going to come over again if the first international here had gone ahead but I’m glad that I made the journey across,” said Chabert. “The cross-country courses were very educational, testing in places, and the ground was the best I’ve seen all year. Both horses could well be back for Millstreet as I’ll fill up the lorry for that.”