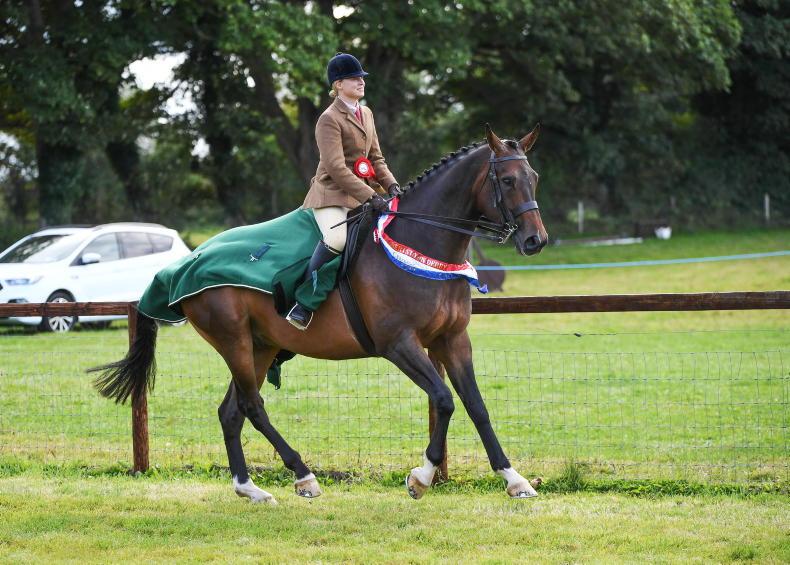 AMORY McMahon’s journey from Athenry to Kilmessan paid off last Sunday when she won the ridden horse championship at the Lambertstown Derby Show on her mother Kate’s Woodfieldfarm Baloo.

The six-year-old Spirit House gelding progressed to the championship by first winning the hunter class on the ridden programme, heading the final line-up of judges George O’Malley (conformation) and Claire Gilna (ride) ahead of Nigel Carolan’s Corran Rising Star.

Woodfieldfarm Baloo was bred in Co Waterford by Rosemary Connors out of her highly-acclaimed mare Woodfield Valier (by Lucky Valier), a multiple champion in-hand and under saddle in the show ring who also tasted success in the eventing sphere.

“We bought him in January from Rosemary and he’s just wonderful,” enthused the rider. “I think everything is really clicking into place now.

“He’s won three championships in a row over the last three weekends – Moate, Royal Meath and now Lambertstown. He was champion in Newcastle West, second in Tatts, Balmoral and the Northern Ireland Festival and third in Dublin. He’s going to Ballinasloe Show on Sunday (tomorrow) and then going on a break. I hope to do some show jumping over the winter and spring with him as he’s got incredible scope – like his Mammy!”

Among the other winners who qualified for the ridden final were Becky Ryan’s owner-ridden Bluestone Shadow, an 11-year-old grey mare by Rebel Mountain who won the Irish Draught class, and Zara Kelly’s owner-ridden Roo Too, a nine-year-old bay mare by Jackaroo who topped the final line-up in the amateur/home-produced class.

Walsh competes at RCP3 level with her six-year-old coloured mare and they were members of the Tara Hill quartet who won The Irish Field dressage team challenge at this year’s Association of Irish Riding Clubs Festival in Mullingar.

The Treo Eile racehorse to riding horse finals (which feature elsewhere in the show reports) formed part of the ridden programme, so also through to the championship were Milliner and General Principle. Given her recent success, McMahon was probably fairly confident of claiming the title on board Woodfieldfarm Baloo but she had to pull out all the stops to see off fellow Connaught rider Philippa Scott and the former Henry de Bromhead-trainer Milliner, a nine-year-old bay gelding by Gold Well.