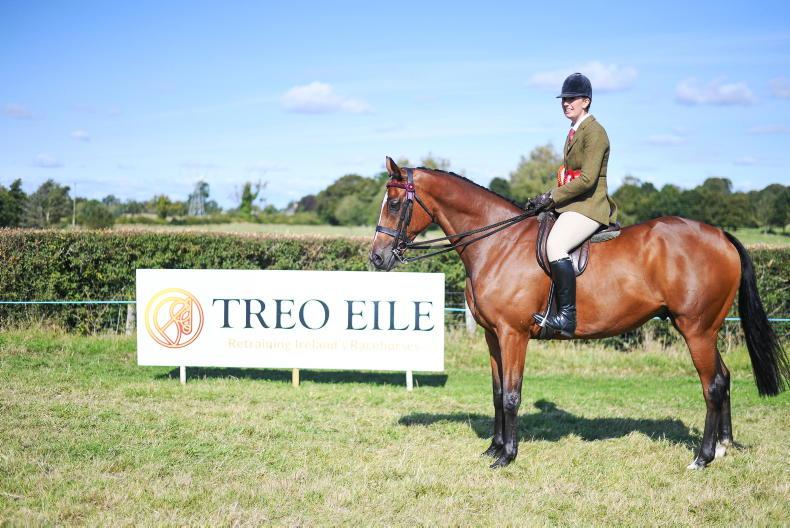 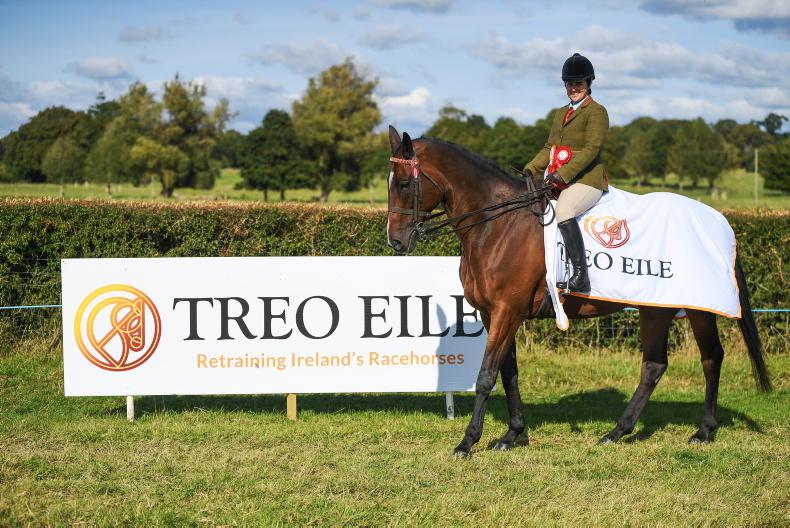 THE finals of the Treo Eile showing pathway series were staged last Sunday at Lambertstown Derby Show where they formed part of the ridden programme with the winners and second-placed horses going forward to the ridden championship.

Co Kildare’s Claire Gilna was the very busy ride judge for the day in this ring but, for these two classes, George O’Malley ceded the role of conformation judge to Anne Magee. The combinations who came before the two judges had qualified at shows around the country.

The first class the pair had to judge was the Novice final and here their winner was very much a novice, the former Henry de Bromhead-trained Milliner, but the Gold Well gelding was partnered by one of the most experienced show horse riders at the Co Meath venue on Sunday, Philippa Scott.

Scott, who teaches Business at The High School in Rathgar, told The Irish Field of her journey to-date with Milliner who ran six times for de Bromhead in the colours of Gigginstown House Stud and, on each occasion, was partnered by Rachael Blackmore.

The bay, who was bred by Peter Nolan, is out of Carthanoora, a Topanoora half-sister to Carthalawn (by Foxhound), an eight-time winner who scored at Grade 2 level over fences and was also Grade 1-placed over the bigger obstacles. Milliner won first time out over hurdles at Punchestown in October 2018 and was also placed twice over timber. On his final start, at the 2021 Cheltenham Festival, he finished fourth in the highly competitive Grade 3 Pertemps Network Final Handicap Hurdle.

“My cousin Brian Scott, who is one of the head lads in Henry de Bromhead’s, got Milliner and asked would we like to take him. When he arrived at Barnfield (the Scotts’ home near Ballina) at the end of last year, we just gave him time to let down before we started reschooling him. Dad and some of the helpers at home keep him ticking over by lunging him when I’m in Meath during the week,” said Scott.

“After finishing second of 16 at Mullingar Show, we brought him to the Tattersalls July Show. He was entered in the racehorse to riding horse class on the Saturday but, as I was riding in the Connolly’s Red Mills final at the same time, he had to stay in his stable. Fortunately, I was able to enter him in the large riding horse class the next day and he came out and won! He had a couple of weeks off after that and Lambertstown was our first start since then.”

The Open class winner, the Seainin Mahon-owned and ridden General Principle (who, too, is by Gold Well and also ran in the maroon and white colours of Gigginstown House Stud) needs no introduction as he has his own Facebook page, General Principle’s Road to RDS.

Mahon, who works for the 13-year-old bay gelding’s former trainer, Gordon Elliott, has charted her own and General Principle’s road to showing success and while there were smaller victories along the way, the pair achieved what Mahon had dreamt of when winning the Irish Thoroughbred Marketing racehorse to riding horse championship at the Dublin Horse Show last month.

General Principle, who was bred by the Arctic Tack Stud out of the unraced Be My Native mare How Provincial, is a half-brother to three other winners including Bella Mana Mou (by Snurge) whose four wins included a graded chase at Navan. General Principle won a point-to-point and five races on the track, highlighted by his head success in the BoyleSports Irish Grand National at Fairyhouse in April 2018.

Since retiring after pulling up in a handicap chase at the same Co Meath track in November 2020, General Principle has shown that his skills aren’t just restricted to the flat as, ridden by Katie Walsh, he was on the winning Seabiscuits team at the Treo Eile pro-am jumping challenge last December. Since winning at Dublin last month, he – and Seainin – have settled into the celebrity life-style, parading at Downpatrick, The Curragh and at last Saturday’s open day at Elliott’s Cullentra Stables. He is now on his holidays.

Both winners contested the show’s ridden horse championship where Milliner took the reserve title behind the hunter winner, the Amory McMahon-partnered Woodfieldfarm Baloo.