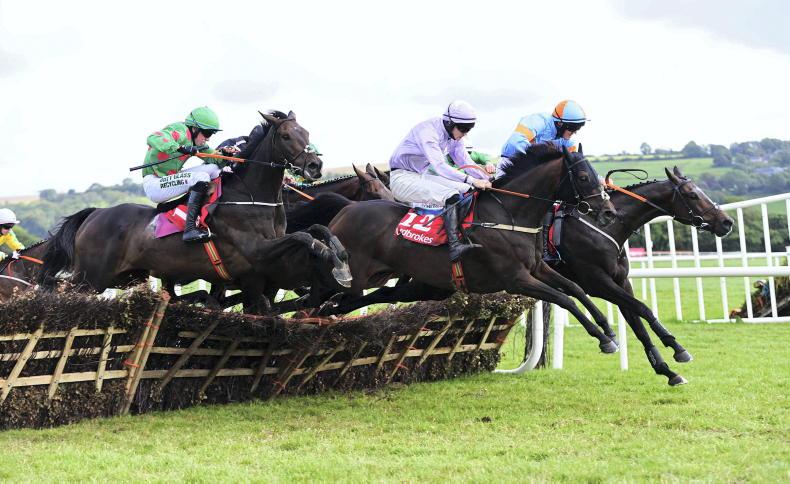 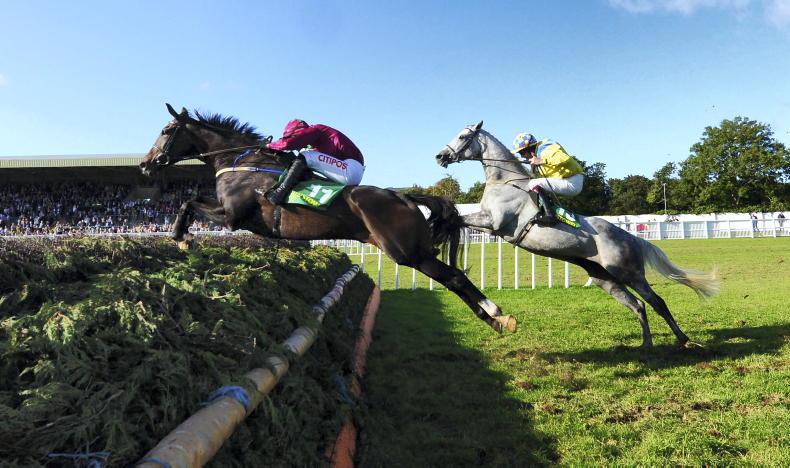 TERENCE O’Brien struck quite a blow for the country’s smaller yards as he produced Magnor Glory in the form of his life to claim a famous success in the €100,000 Ladbrokes Handicap Hurdle yesterday.

A second winner for jockey Mikey O’Sullivan since he turned professional, Magnor Glory had in the past suggested that a good prize could be within his reach.

However, a well below par showing at Galway left the six-year-old with plenty to find and he had to prove that two miles brought out the best in him.

Some support in the minutes beforehand saw him go off at 16/1 and that proved well founded, as Magnor Glory, who sports the colours of Barry Walsh and his breeder Joseph Sheahan, came good.

The six-year-old was only ninth turning for home but the field was especially well grouped at this point and Magnor Glory held every chance with two to jump.

He then pinged the last and quickened up well to run out quite a comfortable three-length winner over Fils D’oudairies.

The winner returned to a terrific reception as O’Brien gained compensation for a narrow defeat in this race with Lakemilan back in 2019.

“It’s fantastic,” he said. “For a smaller yard to be in a field like this let alone win it is great. When Lakemilan was second a few years ago little did I think we’d be back to win it a few years later.

“Listowel has been lucky for us for the last few years and its fantastic to win a great prize on a day like this. I wasn’t sure what to expect. He’s been a decent horse for us and we always felt there could be a big handicap in him but he ran very flat at Galway last time.

“He is a bit highly strung and rides out on his own and sometimes you are wondering is he doing enough or doing too much.

“In terms of the future he’s been in a long time now so maybe he could go on a break and come back in the spring when there will be plenty of options for him.”

At a meeting that he has enjoyed so many great days over the decades Michael Hourigan got among the winners once more as Winning Rascal (18/1) bolted up in the second divide of the 80-95 rated Guinness Handicap Hurdle over three miles.

An eight-race maiden coming into this race, the Denis Reddan-owned seven-year-old turned in a revelatory effort under Darragh O’Keeffe.

The winner, who was sporting a first-time tongue tie, swept by Humps And Bumps to seize control of this race early in the straight and win with any amount to spare. At the line, Winning Rascal had seven and a half lengths to spare over the second.

The first divide of that handicap hurdle went to John O’Neill and his son Paul as Tullyhogue Fort notched up the second success of his career.

The 12/1 chance, who is owned by Aisling and Janeanne O’Neill, took the measure of Appian Way before the last for a relatively comfortable length-and-a-half success.

THERE was a familiar feel to the opening event of the day as Joseph O’Brien notched up his seventh success of the meeting when Dawn Rising (10/3) turned over the odds-on The Short Go in the John J. Galvin Maiden Hurdle over two and a half miles.

On his return from two years off, the J.P. McManus-owned gelding had the misfortune to bump into Champ Kiely in a Galway Festival maiden hurdle in which he finished well held in third.

Dawn Rising was clearly all the better for that run though and from before the turn-in, Mark Walsh always looked happy that he had the favourite covered as the front two left the remainder behind.

Dawn Rising asserted in good style from the last to record an easy eight-and-a-half-length triumph and now looks set to head down the novice hurdling route later in the season.

THE reliable John Queally inmate Pat Coyne (5/1) is finally getting the rewards for his commendable consistency as he followed up last month’s success at Tramore by defying a career high mark in the Southampton Goodwill Plate Handicap Chase over two and three quarter miles.

Aidan Coleman was an interesting booking for the grey who carries the colours of his former trainer John Nicholson and Pat Coyne was his usual surefooted self throughout.

The grey was under pressure before the straight but he raised his effort in willing style to hold every chance between the last two fences. Once he got a sniff of victory the son of Fairly Ransom finished strongly to defeat Song Of Earth by three parts of a length.

“He always turns up and he never runs a bad race. They went a good gallop which suited as he likes to come off a strong pace. It’s great to have a winner here, it’s been a lucky place for me,” remarked the trainer.

“If the ground stays right for him there are options for him at Galway and Wexford at the end of next month otherwise he will be left off for the season.”

In first-time cheekpieces, the Charles Byrnes-trained six-year-old was returned the 9/2 joint favourite to shed his maiden tag after 14 previous attempts and he pounced after the last to account for the 25/1 chance Oscar Romero by two and a half lengths.

The winner is owned by the trainer’s sister, Patricia McCarthy. The winning rider sported a black armband in memory of his late grandfather Jimmy.

Mikey O’Sullivan capped a day of days by following up his feature race success with a victory in the bumper on the Michael Kennedy-trained Presenting J (12/1).

One For Lucy, also a runner-up here during the week, gave her all from the front but she could never quite draw the sting out of Presenting J in a race where very few ever counted.

From early in the straight the Conor Murphy-owned Presenting J looked to be going that bit better than the pace setter and she duly got home by a length and a quarter to build on her second at Galway earlier in the month.

A back to form Monas Melody made it two wins from her last three outings in the Listowel Failte Abhaile (Q.R.) Race over a mile and three quarters.

The Sam Curling-trained 94-rated six-year-old, who was sent off the 9/4 second favourite, was partnered by John Gleeson who produced her to strike the front with over a furlong to run.

The Alfred Sweetnam-owned mare then stuck to her task well to dish out a two-and-a-quarter-length beating to West Cork Wildway with Guiri back in third place.