Title: LOOKING BACK: Farmer gives Perle a reason to smile

Leo Powell has four stories from past editions of The Irish Field, dating back to 1957 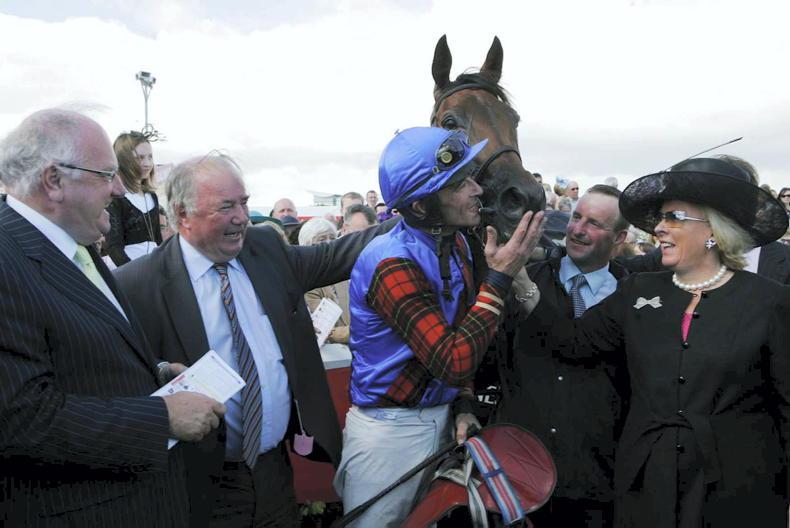 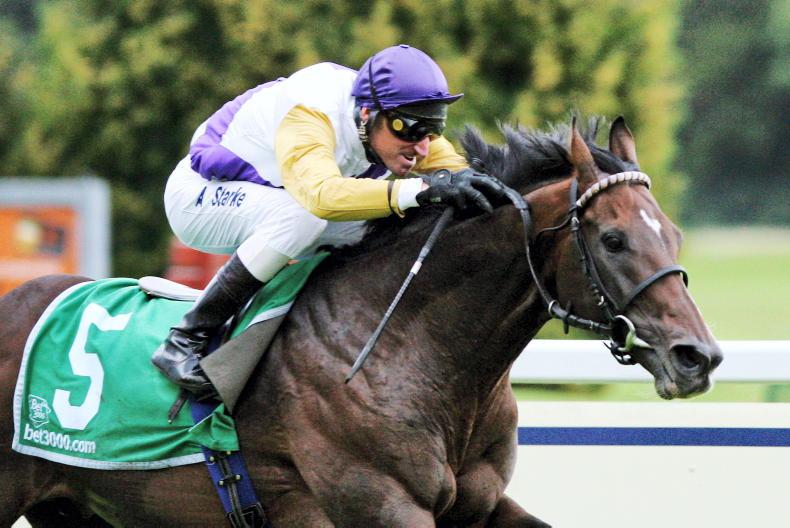 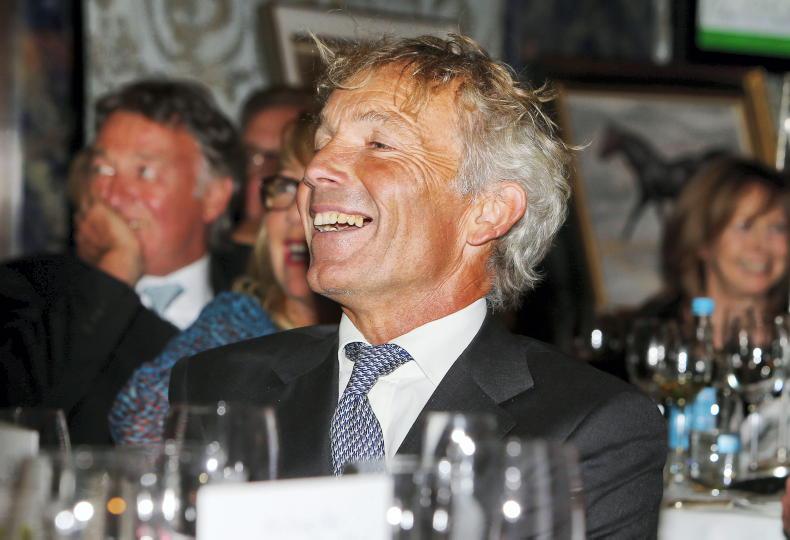 John Francome wasn't smiling after the stewards fined him for having a pre-race agreement with Peter Scudamore and Steve Smith-Eccles \ Dan Abraham/focusonracing.com 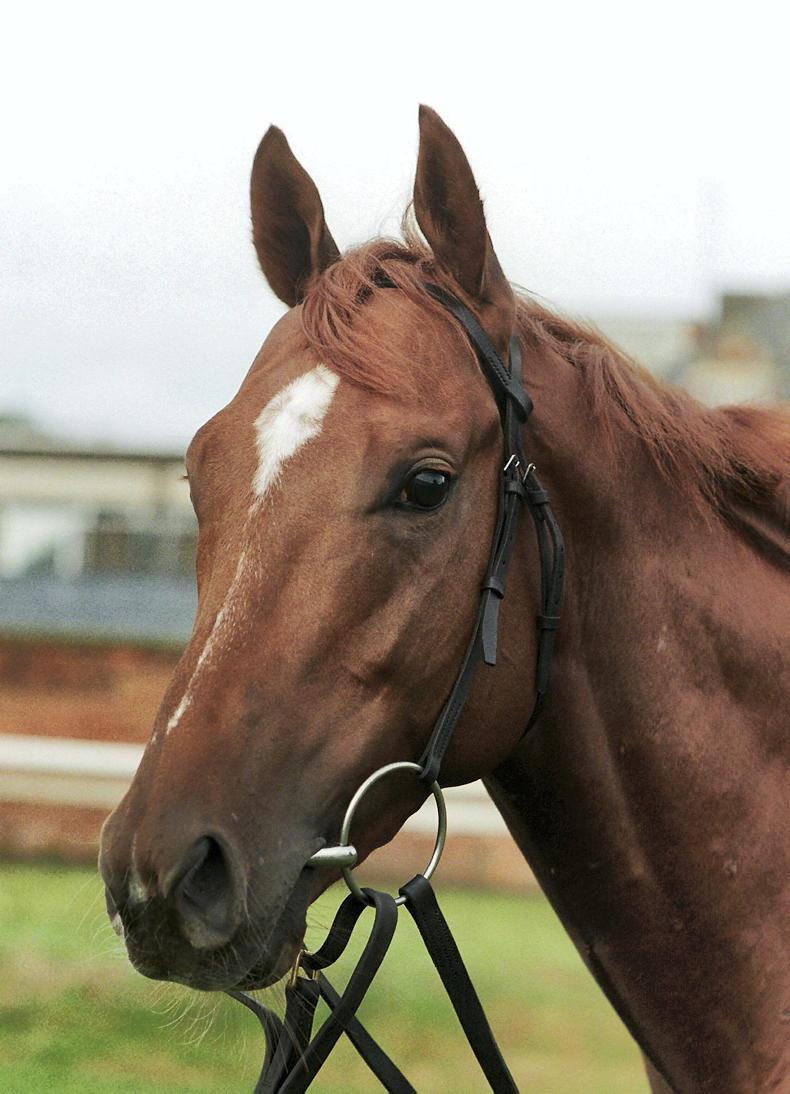 WITH a devastating turn of foot that put the race beyond recall before the field had even turned for home, the Pat Hughes-trained Farmer Brown proved too strong for his opponents in the Guinness Galway Hurdle.

A highly encouraging second in a controversial Leopardstown maiden several weeks previously underlined the six-year-old’s claims for this race, and it was with consummate ease that he justified 9/2 favouritism. The margin of victory was decidedly less than Quinze’s 14-length triumph for Hughes in 1999, but the authority with which it was achieved was quite similar.

Carrying the colours of Dermot and Perle O’Rourke’s Plantation Stud, Farmer Brown found himself 16lbs higher in the weights than when last successful in a handicap. However, that proved no obstacle to the highly progressive gelding, whose performance suggested that he could yet prove capable of holding his own in high-class conditions hurdles.

On only his second ride in the race, Davy Russell was content to look on from the rear of the 20-runner field in the early stages. With almost imperceptible ease, they had improved to chase the leaders nearing two out, at which stage Monday’s GPT winner, Loyal Focus, had moved to the front.

Shortly after that, Farmer Brown produced a stunning change of gear that carried him from fourth into a clear lead in a matter of strides. He was comfortably clear nearing the final flight, and stayed on well on the run-in as the English raider, Freeloader, arrived with a late challenge. Two and a half lengths was the winning margin, with Eagle’s Pass a further length away in third.

“He reminded me of Quinze the way he won today; he’s some bit of stuff,” said a delighted Hughes. “He was only in for three weeks when he ran at Leopardstown, and surprised me that he ran so well. He probably got tired near the finish that day. I suppose I’m glad he wasn’t awarded that race, otherwise I might have been tempted to run him in a flat handicap.

“He’s always been a good horse. We brought him to Ayr for a bumper in January 2006 and Jamie Spencer, who rode him, came in and said he’s a good horse, but he’s just not right. He wasn’t right for about 18 months. I’ve done very little with him since Leopardstown, he doesn’t take much getting ready, and he had everything in his favour today.”

Reflecting on a most straightforward successes, one that came just a day after his first ever Galway Festival winner, Russell remarked: “Pat and the owners were bursting with confidence beforehand. He can be a bit hyper before his races, but everything went right from the minute I sat on him in the parade ring. He jumped super, travelled great, and came up the hill like a tiger.”

THERE were high hopes of some major international success for German bloodstock last weekend, but they were dashed when both Prince Flori, in the King George VI and Queen Elizabeth Stakes at Ascot, and Mi Emma, in Deauville’s Prix d’Astarte, could only finish seventh.

It was left to Soldier Hollow to salvage something from the weekend by running away with Munich’s Group 1 Grosser Dallmayr-Preis, but even he is British-bred, although he has been trained throughout his career by Peter Schiergen in Cologne, and runs in the colours of Helmut von Finck’s Gestüt Park Wiedingen.

Soldier Hollow was the clear form choice at Munich, and went off as 22/10 favourite in the best field for this event for some time. It is the only 10-furlong race in Germany at this level, and recent runnings have not been that strong.

This time Soldier Hollow faced two British challengers, Formal Decree and Clive Brittain’s Hattan (narrowly beaten in an Italian Group 1 on his previous start), German Oaks third Dominante and old rival Arcadio, runner-up to him in this event in 2005, among others.

Sommertag did what was required of him, setting a strong pace and stretching the field right from the start, leading by almost 10 lengths at the far turn, and still holding a clear advantage coming into the straight. Formal Decree swept into the lead two furlongs out, but by now Andrasch Starke had set Soldier Hollow alight, they quickly took it up 300 yards from home, and soon had the race in safe keeping.

The winning distance was three lengths, Formal Decree ran on for second. Soldier Hollow is due to be retired at the end of the season, although details of his stud career have not yet been made known. As one of the best sons of In The Wings (also sire of this year’s German Derby winner, Adlerflug), he should receive plenty of support. He has won 12 of his 30 starts, including 10 pattern races, four of them Group 1s, and this success brought his winnings over the €1 million mark.

Soldier Hollow is the 11th German-trained racehorse to reach this milestone and, talking of such, it was also the 1,600th winner of Andrasch Starke’s career. The 33-year-old is in tremendous form.

[Soldier Hollow made just one more start. He enjoyed great success as a stallion, his Group 1 winners on the flat comprising Ivanhowe, Pastorius, Weltstar, Dschingis Secret, Serienholde, while over jumps he also sired Grade 1 winners Saldier and Arctic Fire]

JOHN Francome, Peter Scudamore and Steve Smith-Eccles, the three leading jockeys last season, were all missing from action last Saturday, following a curious suspension imposed by the Disciplinary Committee of the Jockey Club.

Their mistake, it seems, was to indulge in the customary, time-honoured practice among jockeys and other sportsmen, to share the spoils as well as the risks. Quite simply, before the Schweppes Hurdle last February, they agreed that if one of them won the valuable prize then he would pay £200 to the other two. John Francome won a famous victory on Donegal Prince, in a tight finish with Ekbalco.

The Jockey Club’s excuse for suspending the jockeys can be found buried in the rules of racing. Rule 62 (ii) states that jockeys are forbidden to receive gifts in connection with a race from anyone other than the owner of the horse he rides in the same race. Scudamore and Smith-Eccles were found to be in breach of this rule.

Francome was found to have broken Rule 220 (i) which relates to the aiding and abetting of any offence.

Unfortunately, the suspension of the trio was widely misunderstood and misreported by the media in Britain. One television station claimed that the jockeys had been banned for betting. The publicity, of course, did not match the offence, but perhaps the stewards were upset that Francome had revealed details of the agreement in his ghosted column in a daily paper.

Gliding to a classic success

JOSEPH McGrath’s Silken Glider proved a very impressive winner of the Irish Oaks at the Curragh last Saturday, accounting for Chatting to the tune of four lengths, with Sail Aniar a short head behind, just in front of After The Show and with the two English-trained challengers, Even Star and Lobelia, fifth and sixth.

Silken Glider, who had lost the Oaks at Epsom by only a short head to Queen Elizabeth’s Carrozza, started at the surprisingly generous odds of 11/4, the disappointing Angelet being installed favourite at 9/4.

[Commemorated for many years with a race named in her honour at the Curragh, Silken Glider bred five winners at stud, the best being the Royal Ascot winner Alciglide (Alcide). He won the Queen Alexandra Stakes, while he also captured the Prix Gladiateur in France.

Silken Glider was a daughter of the Derby and St Leger winner Airborne (Precipitation), and he is chiefly remembered as the sire of the brilliant chaser Flyingbolt]